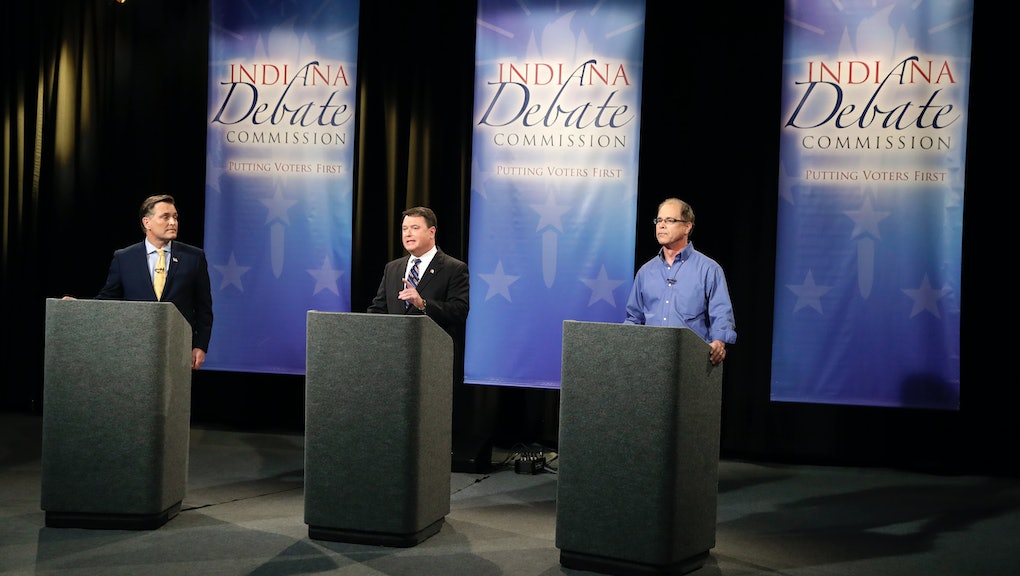 A slew of critical primary votes will take place in a handful of states Tuesday in races that have brought some harsh battles and controversial candidates to the fore — the results of which will shape crucial contests in the November midterm elections.

Voters in Indiana, North Carolina, Ohio and West Virginia will all head to the polls to choose their nominees for crucial gubernatorial and congressional elections. Results could ultimately have a major impact on President Donald Trump’s agenda, as well as redistricting ahead of the 2020 elections.

Many of the primaries taking place on Tuesday, however, have devolved into ugly intraparty battles marred by mudslinging and boatloads of cash.

Unpleasant Republican Senate primaries in Indiana and West Virginia could benefit otherwise vulnerable Democratic incumbents, who will face off with GOP nominees damaged by these bruising primary fights.

“These nasty intraparty brawls are exposing the flaws in each of the candidates, draining their resources and leaving their nominee out of step with the general electorate that will decide these races in November,” David Bergstein, a spokesman for the Democratic Senatorial Campaign Committee, said in an interview.

“There is no winner for the Republicans out of these brutal primaries, only a damaged and battered nominee who is limping into the general election,” he added.

Meanwhile, Democrats also face peril in a gubernatorial primary in Ohio. Here’s an overview of the most important races to watch as results come in on Tuesday.

The big race to watch in Indiana on Tuesday night is the GOP Senate primary, where three Republicans are fighting for the chance to take on Democratic Sen. Joe Donnelly. This is all playing out in a state Trump won by a 19-point margin in 2016.

The primary has gotten ugly. GOP Reps. Luke Messer and Todd Rokita and businessman Mike Braun are each trying to out-Trump each other, while at the same time hurling insults at one another.

Rokita tied himself to Trump by fudging an endorsement from the president on lawn signs he made for his campaign. Rokita’s sign implied that Trump had endorsed his candidacy, but really it was just two people who volunteered on Trump’s 2016 campaign in Indiana. The Trump campaign ultimately demanded that Rokita remove the signs.

After the endorsement flub, Rokita was also burned by past comments in which he called Trump “vulgar.”

Messer led the probably premature nomination of Trump for a Nobel Peace Prize. He’s also been dogged by a pair of DUI convictions from his 20s. He reportedly didn’t disclose those DUIs when he was vying to replace a state legislator in 2003, who had been killed by a drunk driver.

Braun, meanwhile, is being attacked for his history as a Democrat before becoming a Republican.

Still, much of the primary fighting has been between Messer and Rokita. Operatives on both sides of the aisle say this could allow Braun to slip through to victory. While he’s been on the receiving end of fewer attacks, Democrats say Braun’s business record provides a wealth of material for negative ads if he were to make it to the general election. As a state lawmaker, for example, Braun helped push legislation that would benefit his businesses and thus his pocketbook.

Whoever wins Tuesday’s primary will move on to a general election that’s rated a toss-up by Inside Elections, a nonpartisan political analysis site.

Trump and Vice President Mike Pence — Indiana’s former governor — will also travel to the Hoosier state on Thursday for a campaign rally, likely to try and bring Republicans together after the bruising primary fight.

The GOP Senate primary in West Virginia has also gotten ugly in recent weeks, as Republicans try to defeat one GOP primary hopeful who has been compared to Alabama’s Roy Moore, the notorious Senate nominee whose sordid past and accusations of child molestation led to a shocking Democratic win in a deep-red state in December.

The controversial West Virginia candidate is former coal baron Don Blankenship, who went to prison for a year for conspiracy to violate mine regulations after an explosion at his Upper Big Branch mine in Raleigh County led to the death of 29 men.

Blankenship’s mining history is his biggest liability in a state where coal jobs reign supreme. But that’s not the only issue he poses to Republican Party leaders. He’s also a loose cannon with a penchant for racist and otherwise conspiratorial outbursts, such as saying that Senate Majority Leader Mitch McConnell backs “Chinapeople” over Americans because he’s married to a Chinese-American woman. Blankenship also blamed the disaster at his mine on the government.

A super PAC tied to McConnell has spent more than a $1 million against Blankenship to try to sink his candidacy.

A polarizing figure, Blankenship has sucked up most of the oxygen in the race. But the situation has gotten nasty between the other two Republicans running: Rep. Evan Jenkins and West Virginia Attorney General Patrick Morrisey.

Jenkins’ campaign released an attack ad that digitally edited an image of Morrisey to make it look like he was shaking Hillary Clinton’s hand. The handshake never happened, according to The Washington Times.

There’s not much public polling on the race. However, two internal polls obtained by the Weekly Standard show Blankenship leading in a tight race.

On Monday, Trump waded into the race, tweeting that West Virginia should reject Blankenship and choose between Jenkins or Morrisey.

“To the great people of West Virginia we have, together, a really great chance to keep making a big difference. Problem is, Don Blankenship, currently running for Senate, can’t win the General Election in your State...No way! Remember Alabama. Vote Rep. Jenkins or A.G. Morrisey!” Trump tweeted.

Whoever wins the Republican primary will face Democratic Sen. Joe Manchin, in a race currently rated a toss-up by Inside Elections. Manchin is one of the most vulnerable Democrats given that West Virginia was Trump’s best state in the 2016 presidential campaign.

Ohio voters are also headed to the polls on Tuesday, and this time the race to watch is on the Democratic side of the state’s open gubernatorial contest.

Former Rep. Dennis Kucinich is locked in a primary with Richard Cordray, the former director of the Consumer Financial Protection Bureau. The race seems to be more of a fight between personalities, given that both Kucinich and Cordray are progressives.

Cordray has the support of mainstream progressives, such as Sen. Elizabeth Warren (D-Mass.), who came up with the idea for the agency Cordray once led.

Kucinich, on the other hand, is backed by Our Revolution — the issue-based political group tied to Sen. Bernie Sanders (I-Vt.) — who himself hasn’t endorsed Kucinich. The group, however, is led by Ohio Democrat Nina Turner, a top Sanders surrogate who once served in the Ohio Senate.

There’s been little public polling on the race, so it’s hard to say who will win. But Democrats fear Kucinich’s baggage could be a problem in a general election in Ohio. Kucinich has ties to fringe groups that back Syrian President Bashar Assad, who is accused of using chemical weapons against his own people.

And Republican meddling in the race give credence to Democrats’ fears of Kucinich’s baggage.

A Republican donor with ties to Lt. Gov. Mary Taylor — who is running for the Republican gubernatorial nomination — spent money on boosting Kucinich in the primary, BuzzFeed News reported. That’s a sign Republicans believe Kucinich to be the easier nominee to face in a general election.