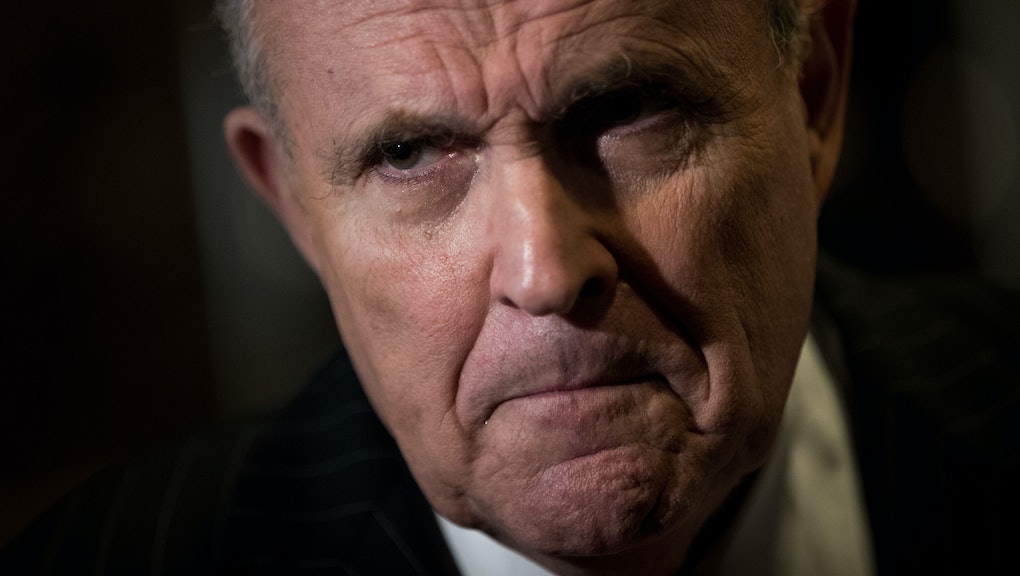 • White House press secretary Sarah Huckabee Sanders has a lot to answer for at her 2 p.m. daily briefing, after Rudy Giuliani said President Donald Trump paid Michael Cohen back for the $130,000 Stormy Daniels hush money agreement. This comes after Trump and Sanders denied Trump knew anything about the payment.

“They funneled through a law firm, and the president repaid it,” Giuliani said Wednesday night on Hannity’s program, according to a transcript published by the New York Times.

Reporter question: Mr. President, did you know about the $130,000 payment to Stormy Daniels?

Reporter question: Then why did Michael Cohen make those if there was no truth to her allegations?

Reporter question: Do you know where he got the money to make that payment?

Giuliani’s comments also call into question the veracity of Cohen’s statements, given that Cohen also denied he was repaid for the Daniels hush money agreement. In a statement after the Daniels payment first came to light, Cohen said:

In a private transaction in 2016, I used my own personal funds to facilitate a payment of $130,000 to Ms. Stephanie Clifford. Neither the Trump Organization nor the Trump campaign was a party to the transaction with Ms. Clifford, and neither reimbursed me for the payment, either directly or indirectly.

Michael Avenatti, Daniels’ lawyer, said, “Every American, regardless of their politics, should be outraged by what we have now learned.”

“Mr. Trump stood on [Air Force One] and blatantly lied,” Avenatti tweeted after the Giuliani interview. “This followed the lies told by others close to him, including Mr. Cohen. This should never be acceptable in our America. We will not rest until justice is served.”

Giuliani’s statement that Trump repaid Cohen for the Daniels payment is going to paralyze Washington on Thursday. Since Congress is out on recess, there’s not much else to distract from the bombshell Giuliani dropped on the country Wednesday night.

Trump’s legal team already seems to be doing cleanup on the comments. Trump sent a series of legalese-filled tweets that seem to have been written by his legal team. They try to explain the payments and argue they were not a violation of campaign finance law.

“Mr. Cohen, an attorney, received a monthly retainer, not from the campaign and having nothing to do with the campaign, from which he entered into, through reimbursement, a private contract between two parties, known as a nondisclosure agreement, or NDA,” Trump tweeted.

“These agreements are very common among celebrities and people of wealth,” Trump continued. “In this case it is in full force and effect and will be used in Arbitration for damages against Ms. Clifford (Daniels).

“The agreement was used to stop the false and extortionist accusations made by her about an affair, despite already having signed a detailed letter admitting that there was no affair,” reads the final tweet in the series. “Prior to its violation by Ms. Clifford and her attorney, this was a private agreement. Money from the campaign, or campaign contributions, played no [role] in this transaction.”

But legal experts don’t buy the argument that because it wasn’t campaign money, it wasn’t a campaign finance violation.

“Sorry, that’s not how campaign-finance law works,” Norm Eisen, a lawyer and former White House ethics czar during former President Barack Obama’s tenure, tweeted. “Here’s an analogy: You rob a bank, then think better of it months later and sneak the money back in increments, ‘with a little extra for taxes and interest.’ You think the judge is going to say never mind when you are caught?”

Even George Conway, lawyer and husband of White House aide Kellyanne Conway, posted the text of the campaign finance rule Trump may have violated.

“When candidates use their personal funds for campaign purposes, they are making contributions to their campaigns,” according to the Federal Election Commission guidance Conway posted. “Unlike other contributions, these candidate contributions are not subject to any limits. They must, however, be reported.”

And Giuliani continued to step in it in a subsequent Fox News appearance Thursday, in which he drew even more connections to the $130,000 payment and the campaign.

“Imagine if that came out on October of 2016?” Giuliani said of the payment to Daniels — a tacit admission that the decisions around payment were political in nature and could have impacted the campaign.

Cambridge Analytica shutters: The data firm that did work for Trump’s presidential campaign is shutting down, the company announced Wednesday. The firm is accused of misusing Facebook data to target voters during the 2016 campaign. The major players of the firm, however, set up shop at a new company, Emerdata.

Trump legal team shakeup: Ty Cobb, a member of Trump’s legal team, announced he is retiring at the end of the month. He will be replaced by Emmet Flood, an attorney who represented former President Bill Clinton during Clinton’s impeachment trial.