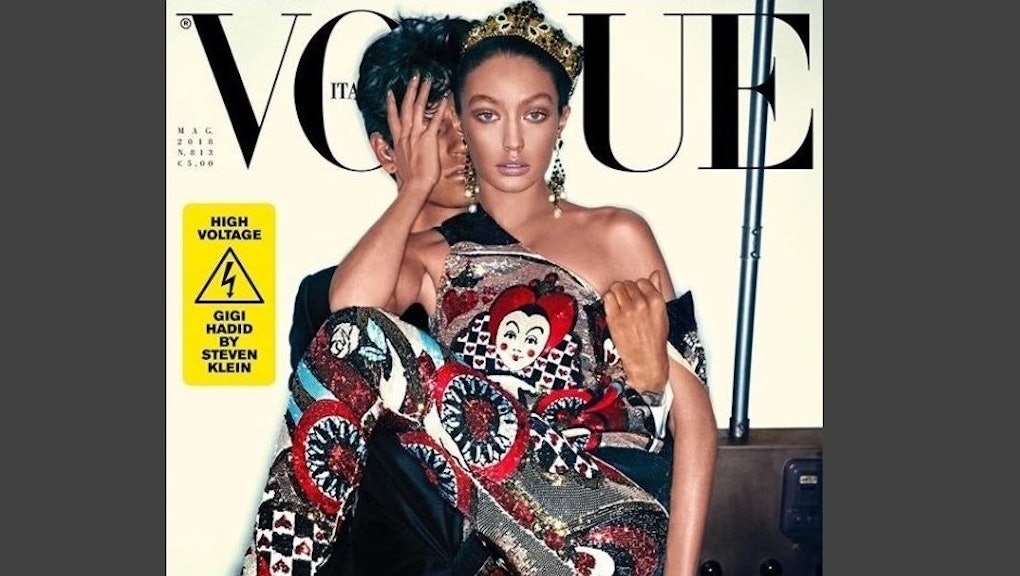 Gigi Hadid is Vogue Italia’s cover star for its May issue. But to many fans, the woman on the cover looks more like a woman who sort of looks like Hadid, but with a slightly different face and much darker skin.

To many people on the internet, it appears as if Hadid is doing blackface, and is nearly unrecognizable as a result.

When Hadid posted the cover image on her Instagram, which has since been deleted, fans flooded the comment section with comments like “Is this even you?” and “This is borderline blackface.”

In the past, Hadid has been accused of appearing in shoots that are racially insensitive, including one in 2015 that appeared in Vogue Italia that had her posing in an afro wig.

But while some are blaming Hadid, plenty others are blaming the photographer: Steven Klein. In the past, the photographer shot white models in literal blackface, including model Lara Stone in 2009, whose skin was painted a dark brown for Vogue France.

And in this case, it’s hard to tell if that’s makeup on Hadid, or if it’s the lighting that’s making her skin so much darker than it appears naturally.

Either way, this cover has spawned an outcry for more diverse models, as opposed to having white models edited to look darker than they are.

“Tan is fine,” one commenter wrote on Hadid’s Instagram. “But when you’re covering one of the biggest fashion issues, use a model that looks that color because we NEED diversity. We need to DIVERSIFY. Give other races a chance too. Wasn’t this a perfect opportunity for that?”

“You literally photoshopped her into a different race,” another commenter wrote on Vogue Italia’s post. “If you’re trying to achieve a certain ‘look’ hire a dark-skinned model.”

On Thursday afternoon, Hadid responded to this controversy via her Instagram story, posting a picture of herself leaving the Vogue Italia shoot and writing: “Please understand that my control of a shoot... is nonexistent in terms of creative direction... ends completely when I leave set, and anything done to a photo in post is out of my control fully.”

She then went on to state that the bronzing featured in the photo is part of Klein’s “style,” however she believes it wasn’t executed correctly.

“The concerns that have been brought up are valid,” she wrote. “Please know that things would have been different if my control of the situation was different. Regardless, I want to apologize because my intention is never to diminish those concerns or take opportunities away from anyone else, and I hope this can be an example to other magazines and teams in the future.”

In an email to Mic on Friday morning, Vogue Italia issued a formal apology as well.

“Throughout its history, Vogue Italia has respected and encouraged the creative viewpoints of commissioned photographers,” a Vogue Italia spokesperson wrote. “In our latest cover shoot by Steven Klein, the vision was to create a beachwear-themed story with a stylized bronzing effect. We understand that the result has caused some debate with our readers, and we sincerely apologize if we have caused any offense.”