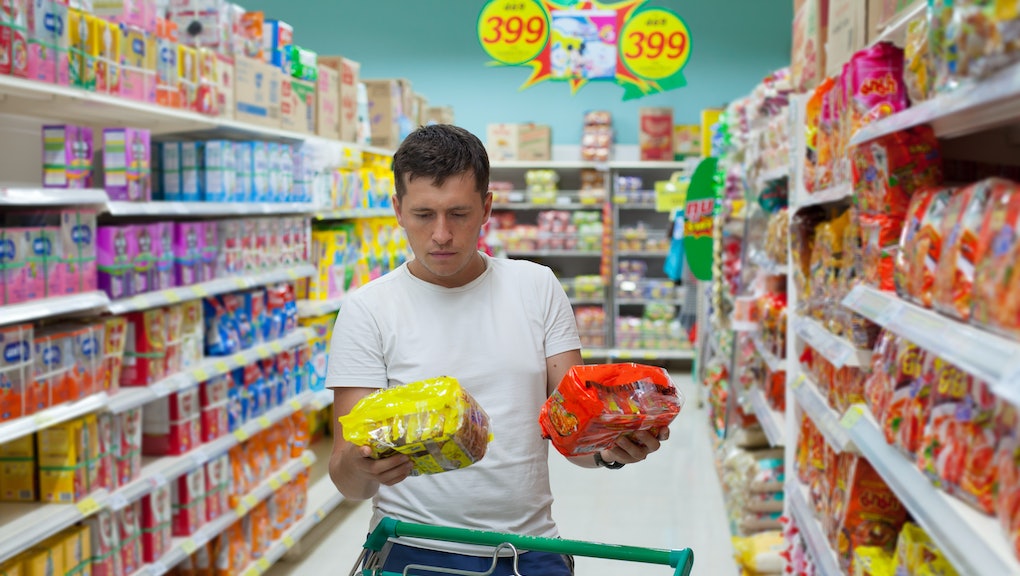 Many of the ways companies try to get you to spend money on their products are pretty genius. Were you aware, for example, that you tend to remember products better when they include hard consonants? Sneaker manufacturers, in particular, seem fond of the letter “K.”

This can also be seen in product names. One theory as to why Apple skipped over the iPhone 9 and went straight to the iPhone X? The tech giant thought everyone would pronounce it like the letter — iPhone “ehks” — which would help increase awareness of the phone in people’s minds.

Brands are well aware of everything we think about when considering what to purchase. That’s because consumers are generally “boundedly rational” when it comes to making decisions, according to Rakesh Sarin, professor of management at UCLA and author of a recent paper on the mechanics of human decision-making.

In other words, our ability to rationally weigh the pros and cons of buying a particular item has boundaries — and brands know it. Here are three of the sneakier ways companies successfully get people to part with their money.

Rely on a sense of familiarity and comfort

One of the biggest factors that affect your ability to make smart purchases is information overload, Sarin said in a phone interview. We don’t have a ton of time to actually learn about the products we need to buy, which makes us rely on a sense of familiarity even when the decision is economically irrational.

A good example of such irrational purchases is brand-name aspirin. Aspirin was Bayer’s bestselling drug as recently as 2011, according to a Bloomberg report at the time. That’s despite the fact that aspirin’s patent is more than 100 years old — anyone can make it, and the active ingredient is exactly the same as generic aspirins. In that case, familiarity with the brand supersedes knowing how the product works and exactly what’s in it.

“People buy Bayer aspirin even it if costs more than the generic brand,” Sarin said. “But doctors don’t do that, because doctors know that it’s exactly the same product, so they will go for the cheaper option every time.”

Regular consumers aren’t expected to know as much as doctors when it comes to treating pain, and brands take advantage of this dynamic by marketing drugs in a way that’s often more complicated than they need to be, Sarin said.

With bigger brands, the familiarity acts as a substitute in our brains for knowledge about the actual product, he added. Therefore, consumers don’t take the time to judge whether lesser-known brands are equally effective — or even superior.

Another example of how brands make simple transactions complicated? Deals, sales and countdown clocks that cloud our ability to decide if we even need the item in the first place. A good rule of thumb: Use price trackers instead of shopping sales.

Brands also like to exploit those warm and fuzzy feelings you have about a product or service, Sarin said, which could help explain one of this week’s biggest business deals: the $522 million sale of the Power Rangers brand to toy and game company Hasbro, Inc. The Mighty Morphin Power Rangers TV series premiered in 1993.

“People have an emotional reaction,” Sarin said. For example, when people sell homes, “They’ll put some coffee or some cookies out just to create an effect, a positive emotion,” he added. “That is not the tipping point, but emotions in effect pay a role.”

Hasbro’s betting it can hook the next generation on the costumed, monster-fighting teenagers. The people who were 5 years old when Power Rangers debuted are beginning to enter their 30s now, and probably starting to have kids. If the Power Rangers enjoy another renaissance, nostalgia will no doubt play a role.

Cookies, candies and ice cream aren’t healthy and never will be. So there’s rarely a fully rational reason to spend money on “healthier” treats as opposed to just practicing moderation with the real stuff.

“Consumers overestimate the healthfulness of a food item based on [one] claim,” Natalie Allen, clinical faculty member of the Biomedical Sciences Department at Missouri State University, said in a 2017 email interview with Mic. “People may see a ‘lite’ dessert and think it’s healthy, when it still could contain hundreds of calories. Sometimes, people also become concerned with terms like ‘locally grown,’ ‘organic’ and ‘natural.’ These terms are not well-regulated and can be misleading.”

It’s not necessarily a bad economic decision to spend more money on better food, especially food that makes you happier and healthier. But it doesn’t really make sense to shell out more money trying to indulge cravings when those low-sugar foods can sometimes make you even hungrier later.

The solution? Recognize terms like “fat-free” as a red flag. Fat provides most of the flavor in food, so fat-free products typically replace the ingredient with added salt or sugar. It’s also a good idea to be skeptical about products that claim to be “healthy” — or some other broad, unregulated term — and actually read the labels instead.