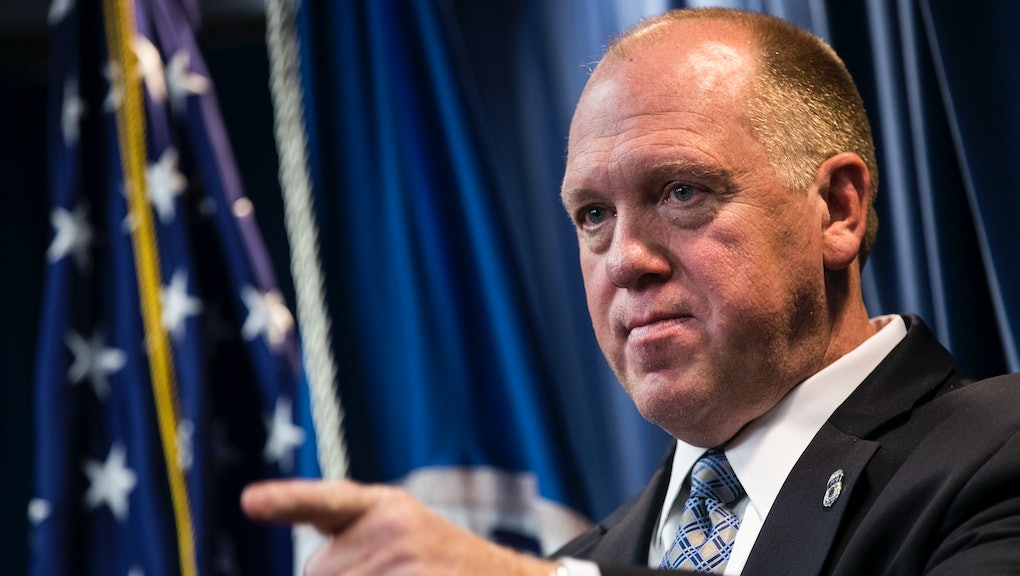 While you weren’t looking: 5 resignations from the Trump administration you maybe missed

Each week Mic brings you a list of five important stories from across the disparate agencies of the federal government that seem to have flown under the radar during a week of unending Donald Trump, Trump administration or Trump legal team-related news.

These stories usually focus on big policy changes or intra-department scandals that would have been front-page news in any other political era. This time, Mic is shaking things up, because in a week where Rudy Giuliani has us talking about the president’s legal troubles for days on end, there was a wave of major resignations from the Trump cabinet. And no, this is not just about Ty Cobb leaving Trump’s legal team.

The head of ICE resigns amid pressure from Democrats and activists

One of the most vociferous advocates for the Trump administration’s deportation agenda has resigned. Thomas Homan, acting director of Immigration and Customs Enforcement has announced Monday that he will step down from the job.

ICE is the agency in charge of detaining and deporting undocumented immigrants across the country. Under Homan’s leadership, and at Trump’s direction, the agency significantly ramped up its deportation efforts. It targeted a broad swath of undocumented immigrants in the U.S. over the past 16 months, many of whom had lived in the U.S. for years and had not committed any crimes.

Homan, who has been acting head of ICE since Trump took office, had been nominated to become the federal law enforcement agency’s official director. But his nomination had stalled in the Senate. According to the New York Times, Homan resigned in part because he did not want to face tough questioning from Senate Democrats, who have been critical of ICE’s actions under Homan, and who face growing pressure from their base to challenge the agency’s existence altogether.

Two officials at the Environmental Protection Agency who have become the focus of two separate scandals involving EPA administrator Scott Pruitt both resigned on Tuesday.

Albert Kelly, the head of the EPA’s Superfund task force, resigned amid looming questions about his involvement with Pruitt prior to their tenures at the EPA. Kelly is the former chair of SpiritBank, an Oklahoma-based lending institution that provided Pruitt with a series of loans, for everything from mortgages to the purchase of a share of an Oklahoma baseball team. At the time, Pruitt had been making only a modest salary as a state elected official in Oklahoma.

SpiritBank eventually became financially unstable, and was subject to oversight by the Federal Deposit Insurance Corporation. Around that time, Kelly was banned from the banking industry for life, for reasons that the FDIC has not disclosed.

Democratic lawmakers had requested that the House of Representatives investigate Kelly and his previous relationship to Pruitt. But before they could compel him to testify, he stepped down from his position.

Tuesday also saw the resignation of Pruitt’s controversial head of security, Nino Perrotta, who had also piqued the interest of lawmakers on the Hill after several reports about his allegedly questionable behavior and practices. Perrotta was in charge of Pruitt’s unprecedented 20-man security detail, which cost tax payers millions of dollars, and accompanied him on trips to Italy and Vatican City in June 2017.

Perrotta had reportedly been involved in the decision to conduct a security sweep of Pruitt’s office and install biometric locks and a $43,000 soundproof booth. The sweep had been carried out by one of Perrotta’s business partners in April of 2017.

On Tuesday, Bryan Rice, the head of the Bureau of Indian Affairs, quietly resigned after less than six months on the job. Though he’d given no explanation, one emerged on Wednesday — according to a report form Talking Points Memo, several Freedom of Information Act requests were submitted for video footage of an incident in which Rice allegedly physically intimidated a woman in an aggressive manner.

Jessica Rogers, a citizen of the Cayuga Nation in New York State, claims that surveillance video from the BIA captured an incident of Rice’s threatening behavior toward her. Rogers reportedly encouraged several tribal leaders and other allies to submit FOIA requests for the footage.

Five identical FOIA requests were submitted with the following language, “Request footage of the Indian Affairs FOIA Officer, Jessica Rogers and Bryan Rice, Bureau of Indian Affairs director on the fourth floor north and south hallway in the main Interior building on December 6, 2017, between on or about 9 a.m. and noon.”

The Interior Department, which oversees the BIA has not given a reason for Rice’s departure.

In May 2017, nonprofit newsroom ProPublica reported that the White House had made the unusual move of hiring Michael Roman, a man with a reputation as a shadowy Republican campaign operative for a job no one had ever heard of before. Now he’s out, according to Politico.

Roman, a former opposition researcher who worked for the Koch brothers’ conservative political network, was hired to be special assistant to the president and director of special projects and research. The job did not previously exist in the White House Counsel’s office, and the White House did not announce the decision.

In February, Politico had reported on the mystery surrounding Roman’s position, with conflicting reports about what his actual responsibilities were. Now it appears that Roman has left the White House under similarly unexplained circumstance.

A Trump nominee with a history of making racist and homophobic remarks, and who was also caught up in the Russia investigation, has withdrawn his nomination for a top scientific post that he had no qualifications for.

Sam Clovis — a former Trump campaign official and conservative talk radio host — had been nominated for the position of undersecretary for research, education and economics at the Department of Agriculture. This was despite the fact that he had no scientific background to prepare him for the role.

Clovis was also a key player in the Trump-Russia affair, having signed off on George Papadopoulos’s secret visit to Moscow. Papadopoulos plead guilty to lying to the FBI about his contact with Russia in November.