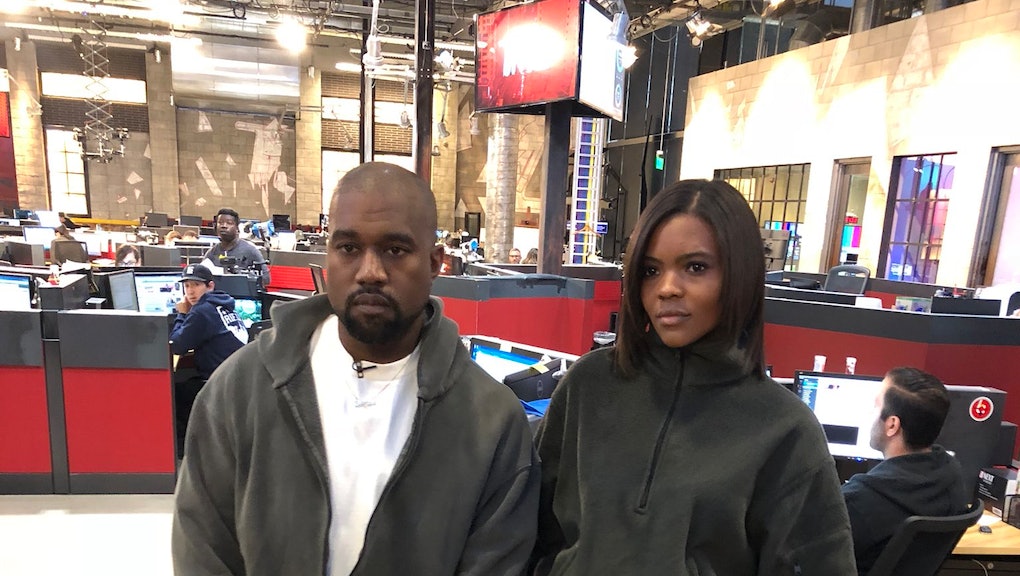 Over the past two weeks, Kanye West emerged from a months-long period of relative silence to espouse a familiar conservative theory about black America. The rapper, who on TMZ this week seemed to indicate that 400 years of slavery was a “choice” for black Americans, and has also alluded to the contentious theory of the “Democratic plantation.”

This theory — which can be traced back nearly 40 years — goes something like this: welfare is a tool by the Democratic party to weaken and subjugate black communities to keep them as a depressed underclass that will remain reliant and, naturally, vote Democrat. It’s not that black Americans interests are at odds with the Republican party platform, it’s that black people haven’t, as he put it in lyrics on a recently dropped track, “made it off the plantation” of slavish devotion to the Democratic Party.

“See that’s the problem with this damn nation/ All Blacks gotta be Democrats, man/ We ain’t made it off the plantation,” he raps on his new track, “Ye vs. the People.”

Mic reached out to several experts on welfare, none of whom could put their finger on when this myth of the Democratic plantation began. But one of its earliest advocates is African-American economist and social theorist Thomas Sowell, who has spent decades advancing the notion that Democrats use government handouts to buy black votes.

“People vote for you when they think that they can depend on you, or they are dependent on you,” Sowell said on William Buckley’s public affairs TV show Firing Line in 1981. “To the extent that people become self-reliant and can feel they’re perfectly capable of taking care of themselves, to that extent, you lose a hold on their votes.”

Rather than discuss welfare directly, Kirk often talks about the evils of socialism — a topic with much more salience among the college students he argues with from the stage at his many campus appearances.

“The African-American community is suffering from a poor memory with a healthy spoonful of indoctrination,” Owens said in one of her popular videos.

When the concept of the Democratic plantation was introduced by conservatives decades ago, it wasn’t about a slavish mindset of victimhood. It was, and still is, about putting an end to welfare by insisting that Democrats use public benefits to weaken black communities. The theory has periodically been trotted out to the fore by conservative people of color, such as Sowell, right-wing commentator Dinesh D’Souza and business executive Herman Cain, as a way of explaining why black people mostly don’t vote Republican.

According to various iterations of Democratic plantation theory, inner cities aren’t dangerous because of centuries of racist policy that reduces opportunity for black Americans, but because Democrats keep them that way so that black people won’t become independent and free. And according to the fluid theory, black liberation activists protesting police brutality aren’t voicing legitimate grievances, but are actually the shock troops of Democrats, stoking racial fears to keep black America divided and afraid. Black families aren’t bereft of fathers because of law designed to over-incarcerate black men, but because welfare is part of the Democratic agenda to weaken the nuclear family, according to the theory.

“It is de rigueur among conservative personalities to blame the Republican Party’s poor performance with black voters on a ‘plantation mentality,’ in which blacks are kept hopelessly dependent on government benefits and the Democratic Party that peddles them,” Slate’s Jamelle Bouie wrote when Donald Trump invoked Democratic plantation theory-like rhetoric during his presidential campaign. “The goal: to keep black Americans from grasping the truth that prosperity comes from ‘liberty’ and free markets.”

The intended audience for Democratic plantation theory isn’t black Americans. It’s white Americans. The function of the plantation myth is to assuage any fear, in an age when white nationalists march by torchlight wearing the president’s red MAGA hat, that racism is still a staple of conservatism.

The plantation myth taps into a key strain of white resentment: the idea that black Americans are afforded a baseline net of protections against calamity that whites don’t enjoy, and are thus kept lazy and and protected. White people work, while black people subsist on the generosity of their keepers, who then reap the reward.

This particular trope is as old as slavery itself. As author and journalist Ta-Nehisi Coates recently wrote in the Atlantic, that 19th century pro-slavery advocates like George Fitzhugh advanced the idea of the “white slave” who was at the whim of white capitalists but benefited from none of the alleged protections of the plantation.

“[W]hereas Fitzhugh imagined white workers as devoured by capital, he imagined black workers as elevated by enslavement,” Coates wrote. “The slaveholder ‘provided for them, with almost parental affection’ — even when the loafing slave ‘feigned to be unfit for labor.’”

It’s not that frequent that someone tries the “Democratic plantation” line on a mainstream black audience. In West’s case, it wasn’t received well among his peers, with responses ranging from carefully sympathetic to angry and disappointed. But conservatives rejoiced.

Fox News host Jesse Waters said on air that West “loosened the grip the Democratic Party holds on the black vote.” Scott Adams, the popular Trump supporter and Dilbert comic creator, said that West “ripped a hole in reality.” Trump praised West at a rally for helping to boost his approval rating among black men.

“The left is losing control of their blacks,” Owens tweeted, after West endorsed her on Twitter.

And now, they’re likely to watch closely for the black vote to slowly shift toward the Republican Party — with high hopes, as always, of black Americans’ gullibility.