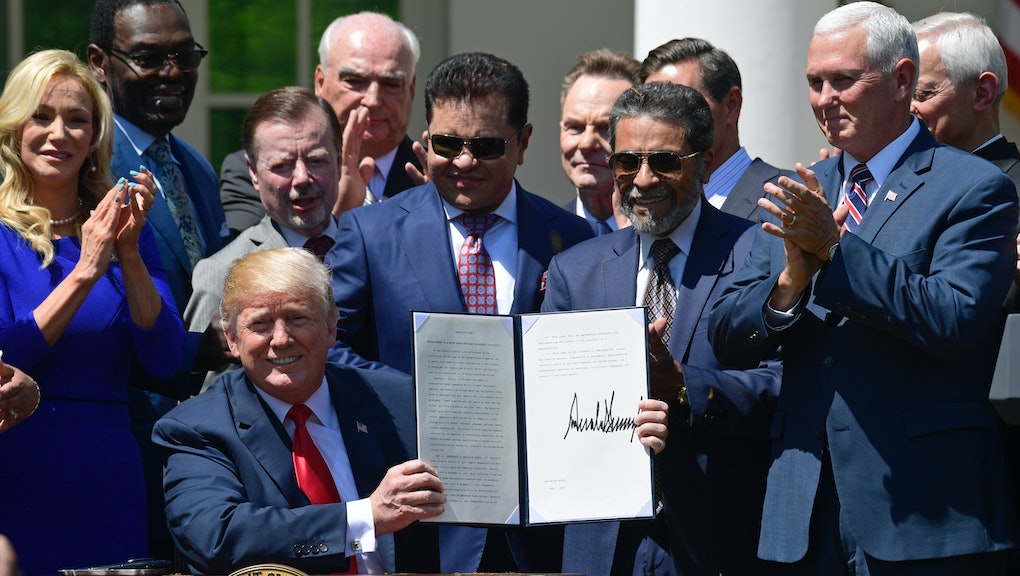 Less than 24 hours after President Donald Trump signed an executive order emphasizing “religious liberty,” the Oklahoma and Kansas legislatures have passed bills that pave the way for adoption agencies to discriminate against same-sex couples and others on religious grounds.

The two adoption bills provide legal protections for faith-based child placement agencies who deny adoption placements that violate their religious and moral beliefs. The laws explicitly allow agencies to discriminate on religious grounds, as well as prohibit the state governments from denying such agencies licenses, grants or the ability to participate in public programs.

The bills passed Thursday in Oklahoma and early on Friday in Kansas, and are now set to go to the states’ governors. A spokesman for Kansas Gov. Jeff Colyer confirmed Friday that he will sign the Kansas bill, though Oklahoma Gov. Mary Fallin has not said publicly whether or not she will sign the legislation.

In addition to same-sex couples, the law could allow for discrimination against single parents and non-Christian couples, Reuters noted.

Some Christian agencies have been explicit in their preference to work with Christian couples. Oklahoma-based Lilyfield specifies on their website that the agency provides services for Christian couples whose goal is to “raise their children to know Jesus Christ,” and the Adoption Association of Kansas Catholic Charities requires potential adoptive parents to be affiliated with a church and provide a letter of reference from a pastor.

The Lawrence Journal-World reported that Deborah Snapp, executive director of Catholic Charities of Southwest Kansas, said that while the agency’s policy is to let the birth parent decide which family to place their child with, the agency would rather shut down than place children with families who did not fit their religious beliefs.

“By our conscience, we would not be able to continue to participate in adoption practice,” Snapp said, according to the Journal-World.

Proponents of the law have said that the move will allow more children to be placed with families. According to Kansas Department of Children and Families data cited by the Associated Press, 7,540 Kansas children were in need of a home as of March — a number that has risen steadily since 2008.

“Catholic Charities and other adoption agencies are key to the fabric of our communities. I look forward to signing this bill because it increases the opportunities for needy children to find loving homes,” Colyer said in a statement.

Opponents argue, however, that in addition to legally sanctioning discrimination, the bills could ultimately limit the number of adoptions. Potential parents could be dissuaded from continuing the adoption process after being turned away from a faith-based agency.

“We can’t count on prospective families who have been turned away because of their sexual orientation, faith or other religious-based criteria will continue knocking on doors of other agencies, each time facing the risk of rejection,” Christie Appelhanz, director of the Children’s Alliance of Kansas, told the Kansas City Star. “We can’t afford to lose any qualified families.”

The new legislation could also have economic ramifications. TechNet, a coalition of 80 technology companies including Apple and Google, sent a letter in April to legislators in Kansas opposing the state’s bill, saying that the legislation could make Kansas less likely to recruit talent, companies and tourists.

Kansas and Oklahoma aren’t the first to pass such adoption legislation. At least seven other states have similar adoption laws, including Alabama, South Dakota and Texas, though the Colorado Senate blocked a similar measure Tuesday with a vote of 16-19. The rash of adoption laws is seemingly in defiance of public opinion, however; according to a study released by the Public Religion Research Institute in September 2017, 68% of Americans believed that adoption agencies who receive federal funding should not deny placements to same-sex couples.

The adoption bills’ passage hasn’t been the only win for proponents of pro-Christian “religious liberty” in recent days, as the Trump administration also signaled its support with a new executive order. The order, which Trump signed Thursday on the National Day of Prayer, establishes a White House Faith and Opportunity Initiative, which the order claimed will “reduce the burdens on the exercise of free religion” and will make recommendations for policies and programs that involve faith-based organizations.

“The faith initiative will help design new policies that recognize the vital role of faith in our families, our communities, and our great country,” Trump said in a speech Thursday. “This office will also help ensure that faith-based organizations have equal access to government funding and the equal right to exercise their deeply held beliefs.”

Much like the adoption bills, however, the new initiative has also sparked concerns that it will pave the way for anti-LGBTQ discrimination, and both GLAAD and the American Civil Liberties Union have said they will be closely monitoring the new initiative.

“Freedom of religion is a core American value, and starting a White House Faith and Opportunity Initiative would not be alarming, except for the anti-LGBTQ extremists and organizations who have the president’s loyalty and his ear,” Zeke Stokes, vice president of programs at GLAAD, said in a statement quoted by the Daily Beast.