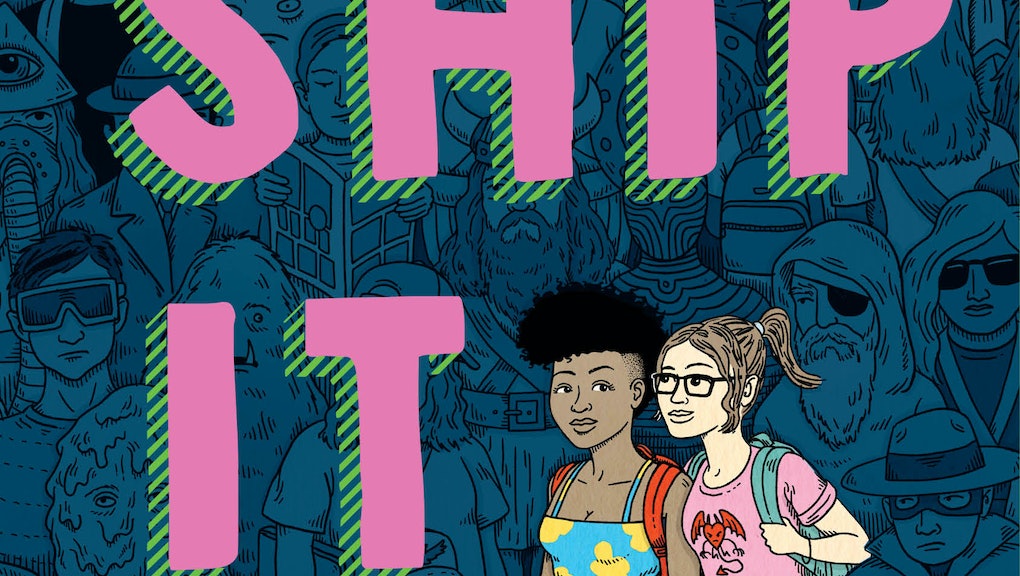 What’s the difference between fan fiction and “real” writing? It’s a question that main character Claire ponders in Ship It, Britta Lundin’s debut young adult novel. Is it because it’s not published in a concrete book? Because it doesn’t use original characters? Because it doesn’t make money? According to Claire, who’s a fanfic writer herself, “No, we all know it’s none of those things. It’s merely this: “Real writing” is done by serious people, whereas fan fiction is written by weirdos, teenagers, degenerates and women.”

It’s passages like these that help elevate the story, because it’s clear Lundin — who was a fanfic writer herself — has intimate and firsthand knowledge of the subject. Ship It (adapted from Lundin’s own unproduced screenplay) is about a teenage girl who fiercely “ships” the two male leads in a fictional, CW-esque television drama called Demon Heart and who, once she winds up joining the cast for a publicity tour, is on a mission to make that ship a reality.

The just-released book’s recurring themes — fandom, the LBGTQ community, life on the internet (Tumblr, to be exact) and the thin line between art and its consumers — aren’t written from an outside perspective, but from someone who’s been deep in those trenches. (The original Ship It screenplay is what helped land Lundin her first job as a TV writer, on the CW’s Riverdale.)

During a phone interview just days before the book’s May 1 release, Mic spoke with Lundin about Ship It’s origins, queerness and how Hollywood could benefit from listening to enthusiastic, vocal fans.

Mic: How did the book come about? The story is reminiscent of the Supernatural fandom and the controversy that occurred at a convention.

Britta Lundin: I get asked a lot if Demon Heart is a stand-in for Supernatural. I think Supernatural fans will find something very familiar in it, but it’s not. There’s so many shows that have been put in the same position where fans see a gay relationship on the show that the creators never intended to be there, and suddenly there’s conflict between the fans and the writers or the actors about what is the truth [and] who gets to decide what characters are gay. It’s not just Supernatural; there’s Teen Wolf, Once Upon a Time, Sherlock. Hopefully the show feels relatable to any fan who’s been part of one of these fandoms that is looking to see themselves in the media.

I’ve been in fandom for a really long time. It started with X-Files fandom back in middle school — you know, the message boards and the fan fiction that was posted on Geocities. Now, fandom looks a lot different. For instance, I was in House fandom, and House was a show where you could definitely see romantic sparks between House and Wilson. We were all wise back then to know that that was actually never going to happen because you never really saw gay people on TV.

Now I think fans feel a little bit more empowered to be like, “No, why can’t it happen? Why can’t these two characters get together? In fact, I think the world would be a better place if they did get together, if we did have more gay characters on TV.” The root of the story is basically a teenage girl who won’t stand for it.

Ship It is told through the first-person perspective of two characters: Claire and Forest, a lead actor on Demon Heart. Why did you include the dueling viewpoints?

BL: For two reasons. The first was I was looking at the script and I thought, “Well, there’s a lot of parts of this story that Claire’s not privy to,” so if I’m going to tell this in first person, I either have to put Claire in those scenes so she can tell the story, or she’s overhearing it or someone’s telling it to her secondhand. The root of the story is the idea that there’s the side of the show that the fans see, and then there’s the side of the show that’s actually happening. Sometimes those match up and are the same thing, and sometimes they’re very different.

The other thing is, I really wrote this for fans and for fandom. I think they’re going to see a lot of themselves in there and recognize a lot of the references and the tropes. [But] I also wanted it to be accessible to people who knew nothing about fandom. The nice thing about having Forest is he starts off the book knowing absolutely nothing. When he asks really basic, simple questions about fandom — or even when he’s asking Tess [Claire’s love interest] about her sexuality and she’s answering in these really complicated Tumblr terms that sort of are overwhelming — I hope that that is a conduit for people who also don’t know anything about fandom [or] about internet culture.

There’s a recurring theme about fan entitlement, and how Claire doesn’t think the show only belongs to the showrunner. As someone who straddles those two worlds of fan and TV writer, what are your thoughts?

BL: I always struggle with the world “entitlement” when it comes to fans because when you look at what options fans have, their options are very limited. They can either watch the show or not watch the show, and if they’re not a Nielsen Household, whether or not they watch doesn’t even get registered. It doesn’t even matter. The only real option after that is maybe to tweet — they’re using their voice the only way they have. That’s literally the only power they have.

Creators calling fans “entitled” feels like the ultimate punching down to me, because creators are the ones who hold all the power. They’re the ones who get to decide what happens on the show. They’re the ones who make the creative decisions. The fans can’t do any of that. All they can do is try to make their voice heard. That’s where I come from, and I understand that it can be hard as a creator when you log onto Twitter and there’s a lot of people asking you to do your job in the way that makes them happy. That’s what Twitter filters are for, you know?

Let’s talk about Claire and Tess’ relationship because there’s tension there: Claire is figuring her sexual identity out while Tess is more sure of herself, and they clash.

BL: I thought, “How interesting for this girl who is so confident about her fandom and social justice issues [to also be] really unsure about herself.” That’s certainly something that I related to when I was 16. I didn’t know anything about myself, but I sure had very strong opinions about the current political situation. It feels like a very teenager place to be.

A hard thing about sexuality is it’s so squishy and hard to pin down, especially when you’re young and you haven’t had a ton of experiences yet. “Well, I like one girl. Does that make me a lesbian? Does that make me bisexual or pansexual? Or something else entirely?” You have a world of options available to you and you’re trying to define yourself. It feels like a huge commitment because as soon as you define yourself one way [or] you come out to your parents — and even if your parents are super supportive — it feels like that is forever. Later you can’t un-come out, so that’s what Claire is struggling with — even though you totally can do that, and you can redefine your sexuality as many times as you want.

On the other side we’ve got Tess, who totally knows what her sexuality is. She’s having the opposite problem, which is that she’s got her sexuality stuff figured out, but she doesn’t feel confident being open about her fandom. She’s got friends that she thinks wouldn’t accept it if she told them that she wrote gay fanfic for, like, a non-canon ship on a small genre TV show. She’s trying to maintain her social stuff and this secret internet identity. Which is also how I was in high school. I was super into X-Files fan fiction and went hard on that show and didn’t talk about it at all in school. None of my friends knew.

Tess’ fear of her friends learning of her fandom enthusiasm felt really familiar. Why do you think we have that embarrassment?

BL: When you’re in high school, it’s not cool to like anything. The closer you can get to feeling nothing, the cooler you are. I was never very good at that. I talked a little too much and I would go into my own world and feel the reverie that was the thing that I was passionate about. That was always going to be a barrier between me and coolness. Tess has that figured out where she’s like, “If I talk about this, I’m going to lose cool points and I need those cool points to survive high school, so I’m just not going to talk about it.” It’s just like a math equation for her.

Tess also has numerous differences that set her apart from her friends — she’s black and queer — so I was glad to see her bring up intersectionality to Claire, who hadn’t thought about that before.

BL: I think [that conversation] is important. Claire only cares about one thing in this book, which is her ship going canon and queer representation. Claire’s white, so it took someone else to be like, “Yo, Claire, there are other causes you can care about as well — have you even looked at how [few] people of color there are on this show that we love?” That’s not even the only one: Are there disabled people? Are there trans people? There are so many different ways to have diversity.

What do you want readers to take away from Ship It?

BL: I want fans to read this book and feel seen and heard. There’s more books about fandom coming out, so it’s becoming a slightly more common topic, but for a long time it just felt like the only representations of fans was the crazy, hysterical fan. I wanted a more positive representation of fandom. Claire’s not a perfect character — she makes mistakes, over-reaches and crosses lines.

But I hope that people who don’t understand fandom [will] have a little bit more understanding about why, for some people, a TV show can have an outsized importance in their life. Why, for some people, a character being gay can be the most important thing to them. Understand that this is why we make TV and write books and tell stories: because [for] a lot of people it’ll just be a way to spend an evening, but for some people it can mean a lot more than that. We just have to take care with the stories that we’re telling because you never know who’s going to watch it — and it might change their life.

My plea to fans is, Hollywood is waiting for voices like yours: people who understand fandom and understand the importance of issues like queer representation and intersectionality. If we have those people inside the Hollywood machine, Hollywood is going to get better.