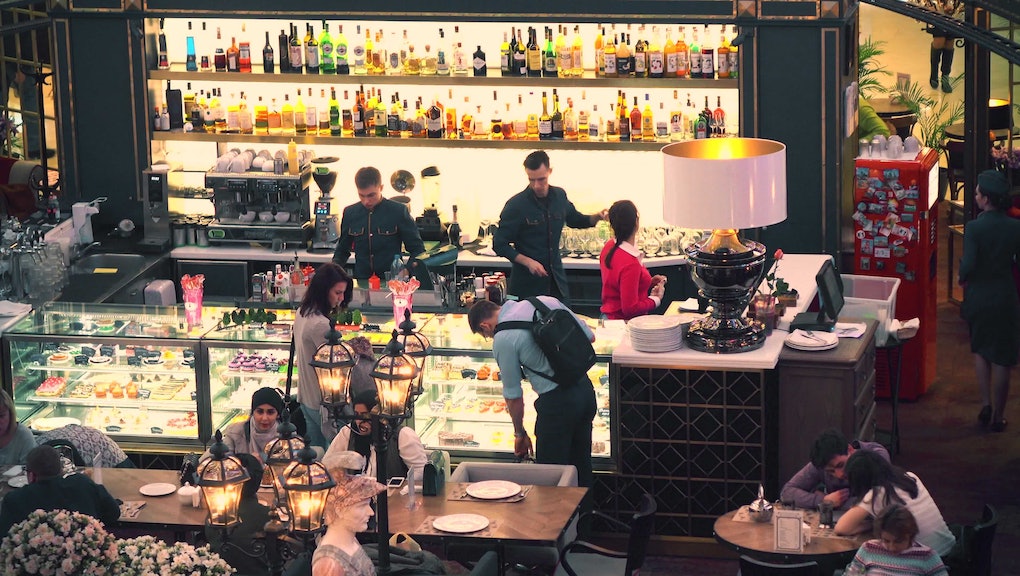 I’ve always dreamed of running my own restaurant. Here’s what happened when I staged for a week.

We romanticize what we don’t fully understand. It’s the old, “How hard could it be?” idea.

In the restaurant industry, some have exposed what happens behind the curtain. Kitchen Confidential seemingly lifted away the veil. Anthony Bourdain’s book about kitchen life, while entertaining and occasionally cautionary, could not possibly capture the full view of the day-to-day battles of restaurant life: the act of cooking the same dozen dishes every day for months, even years at a time, or the disagreeable guests. It has to be experienced firsthand.

So, it was with this in mind that I set out to talk myself out of my dream of running a restaurant.

I wanted to own a place and be the welcoming face at the door, to talk about the amazing things Chef is doing in the back (ideally calling them by their name instead of by their profession), to bring a taste of this and a sip of that and generally to ensure everyone leaves happier than when they walked in. I wanted to sit late after closing and sip whiskey with the staff, congratulating them on a great night. I wanted to not have to be at work until after noon, and to scarf down a family meal at 3 p.m. It all seemed to fit my style.

In April, I was given an opportunity to be a stage (from the French, stagiaire, meaning an apprentice or an intern) at Rare Steakhouse and Tavern in Washington, D.C. Typically a stage works with chefs and cooks; I knew enough to know that wasn’t for me, so I followed around Justin Abad, the managing director — a long-time industry veteran and who oversaw all of the restaurant’s movements.

This was the guy I wanted to be, after all: the consummate host — that warm, welcoming smile.

But after a full day of managing staffing grids, dealing with missed deliveries (pro tip: never be out of Jameson), scrambling to cover shifts for two employees who decided they just weren’t coming in that day, and a tense tête-à-tête with the chef on how many plates the kitchen can push out correctly at one time, the very last thing anyone would want to do is put on a happy face and accommodate any request from any guest.

The more likely scenario? Wanting to hide in the back and hope no one drops anything. But if the restaurant is good, you won’t get that chance because the place will be teeming with guests.

Take tonight. The desire by management to glad-hand the VIPs is palpable, as is the want to check on guests clearly having a good time. In fact, any decent manager would most want to see how the sullen faces at table 220 could be improved.

None of that was possible because the one good bartender needed back up. She was slammed with orders of whiskey cocktails; and selecting a glass of Chardonnay that’s oaked, but not too oaked; and confirming that yes, indeed, that is a 2-ounce pour. To say nothing of dealing with the expense-account group of boys in the corner who “are so sorry, but” just want her to know she has a nice ass. (Appropriately addressing this last issue is an article in and of itself.)

And while I’m doing what little I can to help the bar backs, the floor manager alerts us that the 35-top just called and they’re running 20 minutes late. And they’re now 42, not 35.

And there’s a guy downstairs with a case of Jameson who wants to personally deliver it so he can apologize. And we need to re-fire six steaks so they have more char. Yes, from the congressman’s table.

Still with me? Good, cause we’re only about an hour into the shift.

One of the captains is upselling his four-top so hard on a pricy Côtes du Rhône it feels like he’s pushing them to buy the mud flaps, rain protection and heated seats, too. Another hasn’t touched his table in 15 minutes and they’re all now prairie-dogging looking for someone, anyone, who will take their order.

The first problems of the night are easy to handle; a smile and a free glass of wine fixes a lot.

Simultaneously, 65 people sit down for dinner. The kitchen can handle 20 orders or so at a time — a point made clear earlier in the one-on-one with Chef.

So I watch managers and captains stall one table with an extra taste of wine and some extra patter, then slow walk another captain to the point of sale so his orders go in four minutes after the 10-top’s orders.

The first problems of the night are easy to handle; a smile and a free glass of wine fixes a lot. As the issues roll in like the tide, however it’s harder to keep that smile and magnanimously accommodate every request. And this, I’m being told despite the hiccups, is a pretty solid service night so far.

The amazing thing to me, the neophyte, is everyone is happy. The wine is flowing, and the energy in the room is high. Even among what are errors to the trained eye, those working are adjusting on the fly and making it happen. Those dining continue to enjoy (and spend). Somehow, almost inexplicably, it works.

When it works, it’s beautiful. It’s like a hive of choreographed movement, with every gesture and step deliberate and graceful. No one walks through the dining room without something in their hand — managers, captains, back waiters, the owner, no one. Either bringing something out of the kitchen, from the bar or picking something up off a table. Empty glasses on tables are a strict no-no. They’re meant to be filled or cleared.

When someone really needs rescuing, there are codes among the bees. A look, a nod, an elegant hand to the collar — silent alarm bells to the hive, everyone else blissfully unaware of the chaos they have created. It is a cooperative atmosphere with an esprit de corps few industries can match.

But at times it doesn’t work, and with a team less talented than this one to smooth things over, then it’s a disaster.

Every problem builds on itself. If the management is bailing out the bartender, there’s no welcome taste from the chef to hand deliver to the VIP table. The VIP guest who picked this spot is now wondering why they came. So when his steak comes a hair overcooked, it’s not laughed off with a shrug and a “close enough.” It’s sent back and it pushes every other order slamming the kitchen that much further down the list.

Like babies around an arguing couple, it sets the guests on edge, too. Orders are overly scrutinized and faults seem like they’re being sought. It’s draining and tiring and the kind of death spiral hospitality pros would do anything to avoid. And even then, it’s dealt with professionally, mistakes are learned from and the next night is a welcome next chance — everyone wants to come back for more.

The sound of a happy dining room, however, can make the errors fade. The cacophony of music and loud chatter, of silver hitting porcelain and ice hitting glass — it’s intoxicating.

Watching guests share bites and slumping, worn out from good food and drink, back into a leather booth, hearing eruptions of laughter at large tables — we made that happen.

“It’s the immediate gratification. We aren’t waiting for our quarterly review to know whether we’ve done well, or our bonus check. We know it in our bones.  And that’s why we do it,” Michael Sternberg, CEO of Rare Steakhouse said when I asked about why restaurant people do what they do. He continued:

That is the heroin of the industry — walking out at the end of the shift saying to yourself, ‘I did good.’ We don’t ever need the audience to applaud. We just need them to keep coming back. That is the driver. That’s why the most irritating guest sometimes becomes your best friend — because we’ve won them over and we know it.

Restaurant people are trained in the art of survival; the good ones relish the chaos. Looking for the holes to fill during the busiest moments, I find many have an ‘I love the smell of napalm in the morning’ air about them.

Even amid the chaos, I can see guests are fatter and happier. The kitchen showed off some great food, captains introduced people to some new wines, maybe shared a glass with someone of import. Management accepted thanks and compliments.

It’s now about midnight and the last guests (finally) leave. I’ve been on my feet for hours; I just remembered that I’ve needed to pee since happy hour. And I’m just the freaking intern.

The work isn’t over yet, though. Glasses need to be polished, tablecloths laid, tables reset, inventory counted and staffing for tomorrow determined.

Most folks roll home at 1:45 a.m. I can hardly sleep, partly amped from the hurricane that’s just been survived. Partly, it’s the knowledge that tomorrow it’s coming again. And the day after that, again.