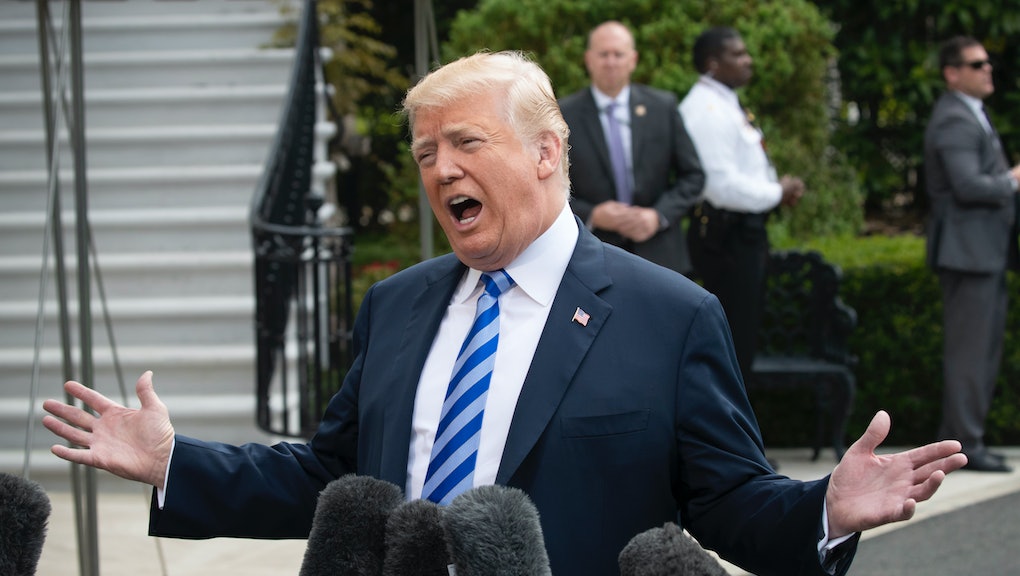 Trump on Friday told reporters gathered at the White House that Giuliani “just started a day ago” and will eventually “get his facts straight” on the case.

Trump, his legal team, the White House and Cohen have all given numerous different stories about the payment to Daniels, which was made to keep her affair allegations silent in the days leading up to the election.

On April 5, Trump told reporters gathered on Air Force One that he didn’t know anything about the payment to Daniels.

Reporter: Mr. President, did you know about the $130,000 payment to Stormy Daniels?

Reporter: Then why did Michael Cohen make those if there was no truth to her allegations?

Reporter: Do you know where he got the money to make that payment?

However, Giuliani threw a major wrench in that version of the story when he told Fox News’ Sean Hannity that Trump did, in fact, reimburse Cohen, and that Trump was aware of it.

“They funneled through a law firm, and the president repaid it,” Giuliani said Wednesday night on Hannity’s program, according to a transcript published by the New York Times.

Giuliani went on to say Trump “did know about the general arrangement, that Michael would take care of things like this,” referencing the payments.

Trump then sent a series of uncharacteristically legalese-filled tweets from his personal Twitter account laying out the agreement he had with Cohen for the Daniels payment.

“The agreement was used to stop the false and extortionist accusations made by her about an affair, despite already having signed a detailed letter admitting that there was no affair,” Trump tweeted Thursday. “Prior to its violation by Ms. Clifford and her attorney, this was a private agreement. Money from the campaign, or campaign contributions, played no [role] in this transaction.”

On Friday morning, however, Trump again changed his story, calling into question Giuliani’s comments and pointing reporters back to his denial on April 5 that he knew about the payment.

Ultimately, the payment puts Trump into legal jeopardy, experts have previously told Mic. At the very least, they said it’s possible Trump violated campaign finance laws, both by exceeding federal contribution limits, and then not reporting the payment as a campaign expenditure.

The experts also said if Trump knew the money was campaign related, and knowingly kept the payment secret, that could lead to criminal charges.

The FBI already raided Cohen’s home and office to find documents related to the payment.