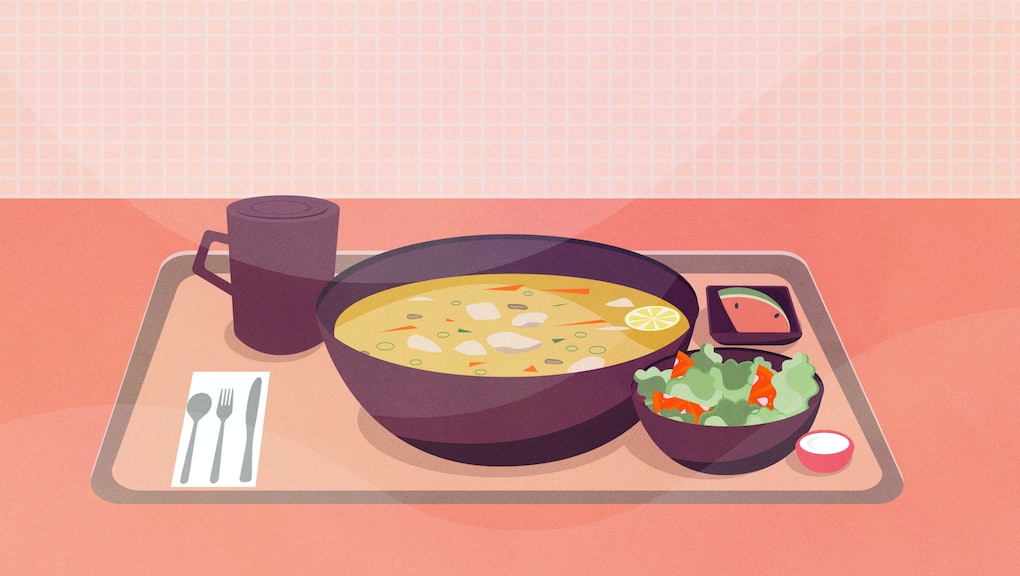 Hospitals are finally starting to care about the food they serve

BOSTON — Close your eyes and picture “hospital food.” What do you see? Perhaps a beige tray, a serving of Jello, maybe some saltine crackers, some overcooked vegetables and a few slices of processed deli meat.

It makes little sense that at the hospital — a place of healing and supposed wellness — food is an afterthought. From the inside, however, it’s easy to pinpoint an explanation. “The challenge is, for hospitals in general, the focus is all on the clinical outcomes,” Shawn Goldrick, senior director of patient support services at Boston Children’s Hospital, said in an interview. “The hospital’s whole mission is to take care of patients — and we do so much well here in life-changing research, and that’s the high-level focus,” he said, adding that food service is rarely a revenue-generating department, which adds to the difficulties of getting resources.

Fortunately, with increasing discussions around food as medicine — eating your fruits and veggies is no myth — change is happening. At Boston Children’s Hospital, the expansive food court in the building’s basement has been reimagined to serve patients, families and staff in more nurturing and holistic ways. The food is locally sourced when possible, a salad bar has been nixed for a “salad creations” station where employees dish out custom orders to reduce cross-contamination, meats are hormone- and antibiotic-free and recipes are developed to directly address patient needs.

The fragrant chicken, lemon and ginger soup, for example, is Boston Children’s own proprietary recipe that was made specifically for cancer patients. Goldrick said that those undergoing cancer treatment often develop changes in their taste abilities; in the hospital’s research, patients have been able to taste and enjoy flavors from citruses like lemon. The addition of ginger is meant to aid in digestion. “It doesn’t work for everybody, but a lot of [our patients] are able to taste it,” Goldrick said.

The hospital is increasing its focus on food for both patients and their visitors, as it can offer comfort and distraction in trying times. After recent renovations, the monthly Parent’s Night Out is now an even bigger event: white tablecloths are draped over standard two-tops, silverware is arranged on tables, wine glasses are filled and parents and caretakers of long-term patients — those who’ve been in the hospital for more than 30 days — are invited to break from what is sure to be an exhausting routine and enjoy a kid-free meal. “We want to transform the whole idea of being in a hospital,” Goldrick said, while the kitchen staff was setting up for the night behind him. “For many parents, this is the first time they’re out of their sweatpants and get to focus on something besides their kid.”

The food court space also doubles as a venue for cooking demonstrations — retractable sneeze guards included — where patients are given the opportunity to learn about food and nutrition through a program called the Culinary Academy. Also held once a month, a group of kids are invited to learn from chefs and make a recipe on their own. The class is more than just a fun experience — it has the potential to make a lasting impression.

One of these cooking events led to an important breakthrough for one patient, who had memory loss after experiencing a seizure, Goldrick said. The patient was unable to recall most pieces of information — including his parents’ names. Earlier in the month, prior to the seizure, the patient participated in a cooking demonstration where chef Travis Morris showed the kids how to make ice cream with liquid nitrogen. “We had smoke going everywhere, it was just super cool,” Goldrick said.

After the seizure, in an effort to jog the patient’s memory, Morris visited his room and, to everyone’s surprise, the patient recognized the chef immediately and spoke about making ice cream together. “It really speaks to the fact that he had a great experience, but also that you don’t know the emotional connection or the impact [food] can make,” Goldrick said. “You talk about care — that’s the power of food.” Morris added, “food is therapy.”

“There’s a difference between care and treatment,” Goldrick said. “Treatment is taking care of the physical ailment, through medication and surgery. [Support services] can’t do that, but we can be part of the care. I think that’s kind of the direction that we’re heading [in].”

Hospitals with smaller budgets don’t have to overhaul their cafeterias in order to make changes, Goldrick said. “We’re not doing anything that’s complete rocket science, we’re not solving a cure for anything like the researchers across the street, we’re not doing cardiac surgery and saving lives like the surgeons are doing here. So other people should be able to do this.” Goldrick explained that before the hospital had “appropriate” space to hold events like Parent’s Night Out, the event was hosted in a hospital conference room. It wasn’t as pretty, but it established a space for caretakers to decompress. Goldrick said its important that food services — anywhere — provide its guests with a great experience and makes an impact, “because food is meaningful to patients.” Often, he said, moments involving food are the best part of their days.