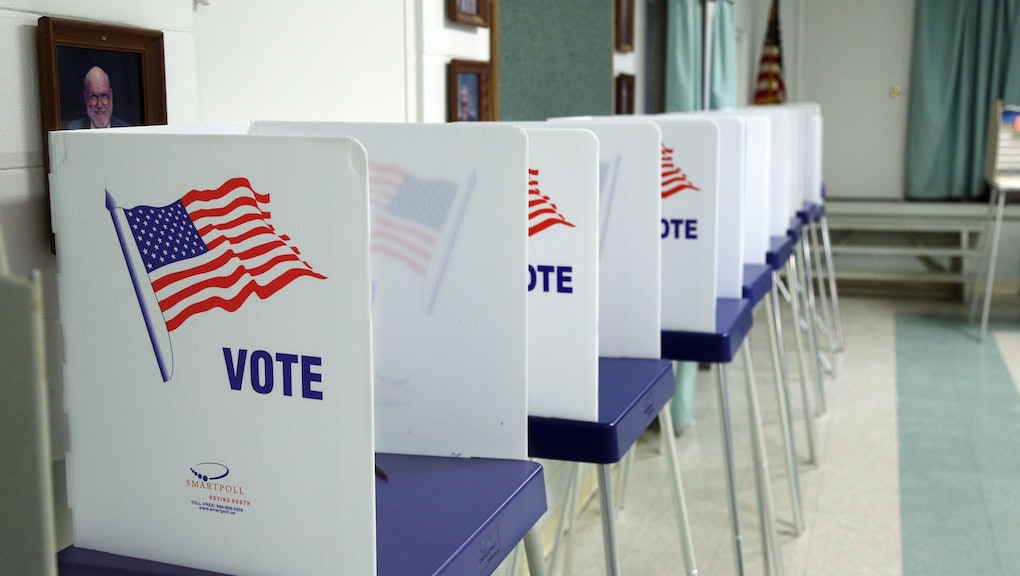 Connecticut on Saturday became the latest state to join a coalition pledging their Electoral College votes to the national popular vote winner, making it the first state to sign on to the proposal since the 2016 election.

Lawmakers in Connecticut approved the measure with a vote of 21 to 14 in the Senate and 73 to 71 in the House. The legislation’s passage makes Connecticut the 12th jurisdiction to sign on to the compact, which was already enacted in California, Hawaii, Illinois, Massachusetts, Maryland, New Jersey, New York, Rhode Island, Vermont, Washington and the District of Columbia.

“With the exception of the presidency, every elected office in the country, from city council, to United States senator, to governor, is awarded the candidate who receives the most votes,” Connecticut Gov. Dannel Malloy said in a statement. “The vote of every American citizen should count equally, yet under the current system, voters from sparsely populated states are awarded significantly more power than those from states like Connecticut. This is fundamentally unfair.”

The National Popular Vote Interstate Compact ties states’ Electoral College votes to the national popular vote winner as a way to level the playing field, ensuring that all voters, rather than just those in battleground states, will play a role in electing the U.S. president. According to data cited by the National Popular Vote organization, battleground states have a distinct advantage in U.S. politics, receiving not only the most attention during campaigns, but also 7% more federal grants and twice as many presidential disaster declarations.

“Some people talk about the fact that we’ve had a candidate winning the presidency without winning the national popular vote, and I think voters care about that. But at the end of the day, the most important reason for the National Popular Vote proposal is to guarantee every voter in every state that their vote counts in the presidential election,” he added.

The interstate compact will take effect once it reaches 270 electoral votes, the number needed to ensure a majority and elect a president. With Connecticut, the compact currently has 172 votes, putting it 98 votes away from becoming reality.

Prior to the Connecticut vote, the most recent state to join the compact was New York in 2014. Fadem hopes, however, that Connecticut’s decision to join the coalition will spur other states to follow suit.

“This is the first state to approve the National Popular Vote since President Trump won in 2016, so we’re very encouraged and we really think that this is going to have an effect on other states who have been considering it,” Fadem said.

“I think the vote in 2016 stimulated a lot more interest in the subject,” Fadem added. “As we’ve gone around the country, people seem to know a lot more about the policy and, I would say, are even more eager now about the National Popular Vote proposal and how it might change the current system.”

Many states have already been considering the proposal. During the 2017 to 2018 legislative session, National Popular Vote bills were introduced in Alaska, Arizona, Georgia, Kansas, Minnesota, Missouri, North Carolina, Ohio, Oregon, Pennsylvania and South Carolina. Measures failed or died in committee in Florida, Maine, New Mexico, Utah and Virginia. There are also ballot measures currently under consideration in Maine and Arizona.

The initiative has also found partial success in some state legislatures. Since 2006, the measure has cleared at least one legislative chamber in Arkansas, Arizona, Colorado, Delaware, Maine, Michigan, New Mexico, North Carolina, Nevada, Oklahoma and Oregon. Fadem pointed to these states as the initiative’s key targets for the 2019 legislative session — particularly New Mexico and Arizona, where the measure passed in 2017 and 2016, respectively.

“There are a number of states that we’ve passed one House in, so I think those would be natural targets,” Fadem said. “But to be honest with you, we’re getting calls as a result of Connecticut from states that we haven’t been as active in, so we’ll go everywhere we can in 2019.”

Emphasizing the popular vote would seem to be a particularly friendly policy for Democrats; with the exception of the 2004 election, no Republican has won the popular vote since 1988, and enacting such a policy would have elected Democrats Al Gore and Hillary Clinton. All of the states that have signed on to the compact thus far are traditionally Democratic-leaning states that voted for Clinton in the 2016 election.

Fadem stressed, however, that the proposal is beneficial on both sides of the aisle.

“If you’re a red state and you’re not a battleground state, that means one thing: that there won’t be any presidential campaigning in your state, no ads talking about issues that are important in that state — basically they’re shut out of the presidential election,” Fadem said. “The presidential election every four years … is certainly the most important, most exciting election that’s conducted in our country. And it also causes a lot of activity in the states it’s conducted in. So for a red state or blue state that doesn’t get to participate, that’s why this proposal makes sense.”

Though the states that have already joined the compact are reliably Democratic, some state Republicans have already shown their support for the National Popular Vote proposal. The Arizona House of Representatives, which passed the measure with a vote of 40 to 16, became the third Republican-controlled state legislative chamber to pass the proposal, after the Oklahoma and New York Senates.

The Connecticut bill also received some bipartisan support, with three Republicans voting for the measure in the Senate. Fadem said he expects this bipartisan support “will be the trend as [other bills] move ahead.”

“Any legislator in any state that is not a battleground state should support this proposal, because it’s about making their state relevant in the presidential election,” Fadem said.

“It doesn’t matter if you’re a Republican or a Democrat, or a Libertarian or a Conservative or a Green Party [member]. If you live in a state that is reliably red or reliably blue, that means you’re condemned to never participate in the presidential election, and we think it’s time to change that.”