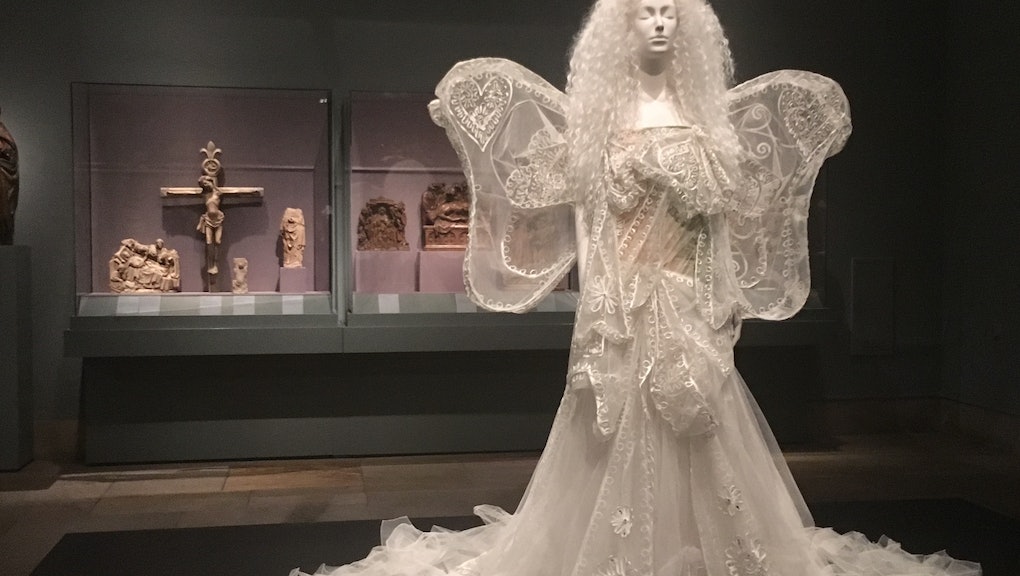 Here’s a first look at the 2018 Met Gala exhibition, “Fashion and the Catholic Imagination”

It’s the first Monday in May, which means it’s time for the Met Gala — the annual celebration marking the opening of a new fashion-centered exhibition at the Metropolitan Museum of Art.

The 2018 exhibition, titled “Heavenly Bodies: Fashion and the Catholic Imagination,” aims to highlight Catholicism’s longtime impact on fashion design. Guests (including celebrities) of the event will reflect the theme in their style choices, too.

Mic attended the museum’s press preview Monday for a sneak peek at the kind of fashion we might spot on the red carpet tonight, as well as what fans will see when the exhibition opens Thursday.

The exhibition — which will be on view in the Anna Wintour Costume Center, the Byzantine and medieval galleries, part of the Robert Lehman Wing and at the Met Cloisters in northern Manhattan — includes more than 150 ensembles related to the Catholic church, whether directly inspired by Catholic fashion or tied to elements of Catholic art, architecture or jewelry.

The exhibition isn’t just about fashion, but about the conversation between Catholicism and fashion that has taken place throughout time. Surrounding each elaborate gown or ensemble are ancient relics, Catholic artifacts and art that feel interconnected with the exquisite designs themselves.

If the exhibition aims to highlight Catholicism’s influence on fashion, it achieves that goal within seconds of walking through the galleries.

Garments found throughout the Catholic church, like cassocks or soutanes — which are considered both daily and formal dress by the secular clergy — received numerous high-fashion reinterpretations.

The same goes for the nun’s habit, reinterpretations of which designers like Thom Browne and Dolce & Gabbana have sent down the runway numerous times.

Apart from celebrating Catholicism’s influence on high fashion, part of the exhibition honors the fashion found within the Catholic church itself. In the Anna Wintour Costume Center, there are 40 ecclesiastical masterworks from the Sistine Chapel sacristy, many of which have never been seen outside the Vatican. These objects, some of which date back to the 18th century, include papal vestments and accessories such as rings, shoes and tiaras.

A notable highlight in the Costume Center is the pair of red shoes worn by Pope John Paul II.

Walking away from the exhibition, one can easily expect an extraordinary night of Met Gala fashion ahead of us. Many of the most legendary and talented designers over the years have looked to Catholicism and the art surrounding it for inspiration, creating gowns that look more like cathedrals than dresses and outfits that could transform a person into a real-life angel, as seen in the Thierry Mugler design below.

Fashion-wise, there’s plenty that could go wrong Monday night. But with an exhibition as thoughtful and thought-provoking as this, we have hope.