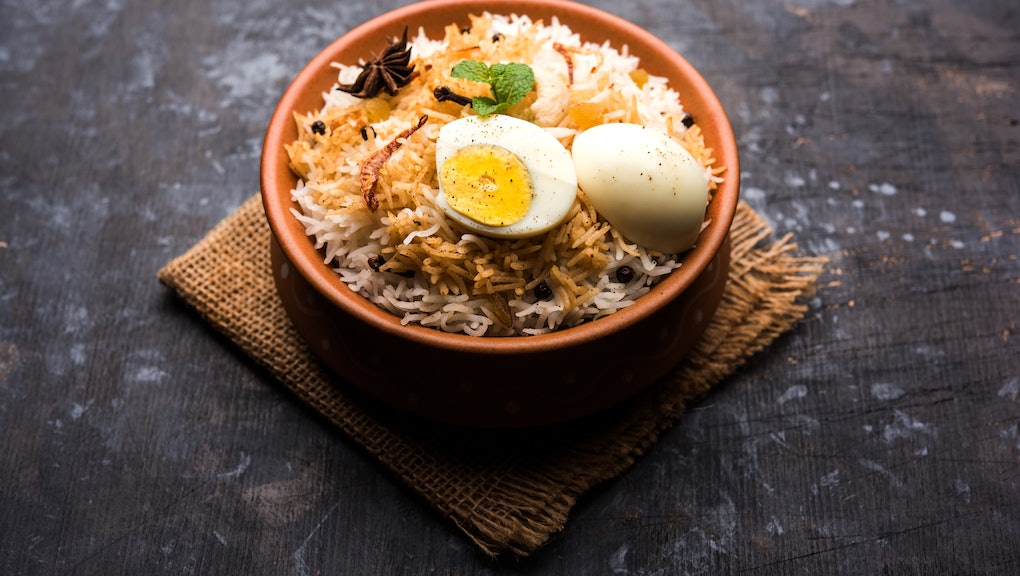 Growing up in the West Bank on the outskirts of Ramallah, Palestinian chef Fares “Freddy” Zedeia ate maqloubeh once a week. The layered casserole of seasoned rice, fried vegetables and braised meat took his mother three hours to assemble, so she reserved it for family meals on Fridays after evening prayers.

“It’s the kind of thing you make for a big family,” Zedeia said, “where everyone fights for the last bite.”

There’s a dramatic climax in the making of every pot of maqloubeh, when the cook grips the heavy pan, hoists it into the air and flips the dish onto a serving platter in one smooth motion. The rice, burnished crisp in places and steamed throughout with the scents of chicken, eggplant and cauliflower, spill out from the bottom. Zedeia’s mom would add a flurry of herbs over the caramelized top, and the whole thing would get devoured in minutes.

“Everyone serves themselves,” he said. “That’s the best part. It’s a matter of having the family together.”

Once a month or so, Zedeia takes a day off from King of Falafel & Shawarma, his restaurant in the Astoria neighborhood of Queens, New York City, to make his mom’s recipe for friends and family in the neighborhood. The only thing that’s changed is the meat — he can’t find the fatty cuts like in the good old days — but there’s always a crowd willing to dig in.

Technically, maqloubeh is a pilaf, but a more descriptive name may be party rice: a festive, labor-intensive rice dish designed to feed a crowd, welcome honored guests and celebrate weddings and holidays. And while maqloubeh is distinctly Palestinian, party rice is not. There’s biryani in India, fragrant with spices; plov in Azerbaijan, wrapped in a buttery layer of shatter-crisp flatbread; jollof in Nigeria, heady with tomato and ginger. Pretty much every culture that’s grown or eaten rice has a party rice to call their own, a distinction you won’t find in other areas where wheat, potatoes or corn act as the staple carb.

So, how did a humble grain become the basis for such a luxurious dish?

The jury’s still out on the exact origins of domesticated rice, but most scholars place it in Asia between the eastern reaches of India and China’s Yangtze River valley. Through trade routes like the Silk Road, it then migrated west toward India, the Middle East and Africa, where Arabs and Indians started cooking it into a dish called pilaf — the preparation of which is distinguished by fluffy, separate grains, the presence of fat and other seasonings. A major departure from the traditional East Asian ways of steaming rice, it hints at how those cooks thought about the grain.

“One thing that’s clear is that rice, at this time, [was] the food of the rich, and one of the reasons it became celebratory was because of its expense and rarity.” — Clifford Wright, food scholar

Author Clifford Wright is an award-winning food scholar with over a dozen cookbooks to his name, including A Mediterranean Feast, a historical exploration of the region’s culinary evolution. Research for the book sent him deep into archives to uncover the early history of the Mediterranean’s many cuisines. The earliest references he’s found to Middle Eastern rice cultivation date back to after the rise of Islam in the seventh century.

“You have to put yourself in an eighth-century mindset,” Wright said in an interview with Mic, detailing the early days of rice pilaf.

The linguistic origins of the word pilaf are hazy; it has roots in Arabic or Farsi, though it also shows Greek and Sanskrit influences, said Wright. “But one thing that’s clear is that rice, at this time, [was] the food of the rich, and one of the reasons it became celebratory was because of its expense and rarity,” he added.

Compared to other grains, rice is a pain to grow and process. It requires advanced irrigation technology; correctly hulling the grains without damaging them takes skill.

“Early Arab cookbooks of the 10th century used it in sweet dishes like a delicacy,” Wright said. “And a thousand years ago in Egypt, most people were probably eating millet and sorghum, not rice.”

It’s not until later centuries that the grain became more accessible (Wright noticed increased references in Arab-Italian texts by the 16th century), but even as it did, it retained that original luster of luxury. If hearty whole grains were the staple of the day, rice was the food of refinement.

Wright’s research shows how Arab and Persian traders were responsible for spreading the pilaf gospel across the Middle East and Central and South Asia, but historical and linguistic records also indicate an Indian influence down the subcontinent. And when it comes to luxurious pilaf, there’s nothing like a Hyderabadi biryani, which may be festooned with a dozen spices, dried fruit, caramelized onions, spoon-tender meat and buried treasures like whole eggs.

“There’s this idea of abundance, of gilding the lily. You hunt for that nugget of egg or lamb,” chef Preeti Mistry said in an interview. “It’s a festive dish, something you can easily bring to a large feast, but it’s also convenient since it has your vegetables, meat and rice in one pot.”

At her (now-closed) Juhu Beach Club restaurant in Oakland, California, Mistry served a massive $32 lamb biryani meant for two to three diners in an effort to show what decadence can look like in the context of Indian-American cooking. (You can find the full recipe in her recent cookbook.) Most Indian restaurants, Mistry said, relegate biryani to a “random mess of stuff on a plate. They just don’t pay much attention to it.”

Which is one of the ironies of party rice all over the world: For all its high-end celebratory status, it rarely thrives in restaurant settings. The labor required to pull off complicated layered pilafs is challenging in a busy kitchen focused on à la carte recipes. Zedeia doesn’t even bother putting maqloubeh on his menu, for example, and if you head into any of New York City’s dozens of Persian restaurants, you’ll notice a conspicuous absence of tahdig, the golden-crisp layer of burnt rice pilaf that’s inspired party rice preparations from Afghanistan to Jordan. Party rice may have spread everywhere Arab traders did, but it’s remained inextricably tied to the home.

Party rice may have spread everywhere Arab traders did, but it’s remained inextricably tied to the home.

In today’s context of cheap, abundant grains, that gives party rice a particular reputation as a dish that’s relatively economical in the price of ingredients but costly in preparation time. Think of it like a cultural secret handshake — loaded with meaning for those who get it, but hard for anyone else to parse.

“A cornerstone of humanity”

It wasn’t until he was an adult that Kwame Onwuachi, executive chef at Washington, D.C., restaurant Kith and Kin, figured out the historical connection between his Nigerian father’s jollof rice and his Creole mother’s jambalaya.

“Tone down the scotch bonnet and add some sausage and shrimp, and they’re kind of the same dish,” the former Top Chef contestant said in an interview. Though the New World recipe also draws influences from France and Spain, there’s an undeniable connection to West Africa’s essential rice pilaf.

At Kith and Kin, Onwuachi fries tomatoes, ginger, garlic, fiery scotch bonnet chiles and curry powder into a jammy paste, then stirs in rice and stock to make a ruddy-red pilaf. The dish comes as a side — one of the restaurant’s most popular — but sometimes takes center stage in main courses, like a current dish of seared fish with jollof and dollops of fried-plantain mayonnaise.

Onwuachi’s first exposure to jollof was at his grandfather’s birthday party in Nigeria, where his grandmother made a massive pot to accompany meat from a freshly slaughtered goat, distributed to 100 members of the village. The chef has barely changed his recipe from what he learned in Nigeria — and as he sees it, the dish is a prime example of party rice’s ubiquitous role in the human experience.

“It’s a natural progression of humanity to have a giant rice dish,” Onwuachi said. “They’re cheap, easy to stretch a long way and [act] as a cornerstone of humanity.”

Mistry has a similar perspective on party rice. “It’s a dish that’s traveled and morphed through these different regions,” she said. “Biryani isn’t specifically Indian. It’s a dish from all these cultures mixed together.”