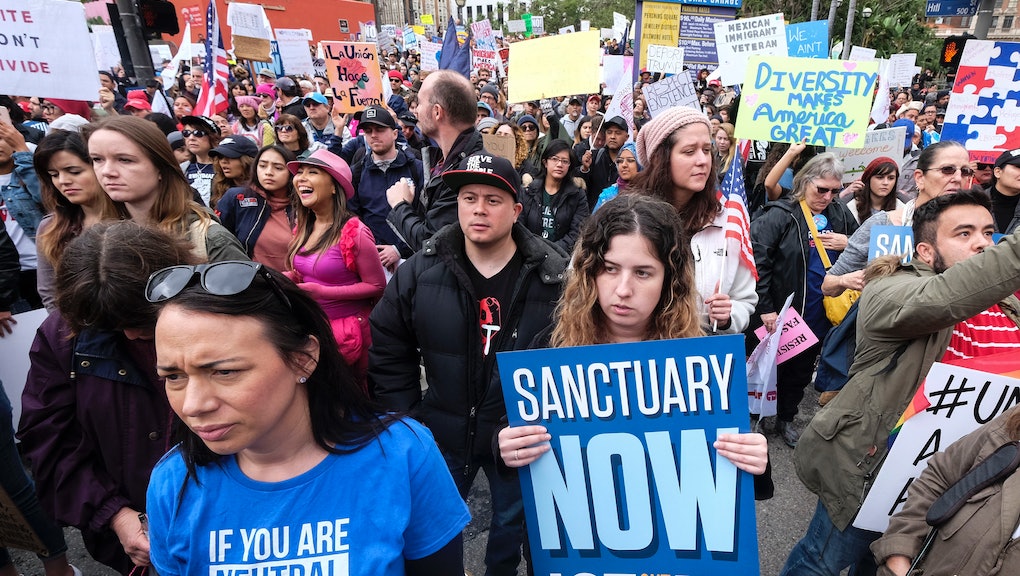 The Trump administration’s hard-line stance on immigration has led many Democratic-leaning cities and states to strengthen their sanctuary policies — but not everyone in the affected communities is on board with their lawmakers’ acts of resistance.

Santa Clarita on Tuesday became the latest California jurisdiction to oppose the state’s “sanctuary” law SB 54, which limits how local law enforcement can cooperate with federal immigration authorities. In March, the Trump administration filed a lawsuit in federal court in California against the law and two other California sanctuary-related laws, inspiring California communities to launch their own acts of resistance.

The city formally opposed the measure and agreed to sign on to the Trump administration’s lawsuit Tuesday with a 5-0 vote after a contentious debate from constituents. The Los Angeles Times reported that 200 people lined up to speak about the proposal, while outside the city chambers, 150 demonstrators and counterdemonstrators gathered. Those opposed to the resolution chanted “No hate, no fear, immigrants are welcome here,” and other pro-immigration slogans, while supporters of the measure, donning “We [heart] ICE” pins, sang the national anthem and told immigration supporters, “Speak English, you’re in the United States.”

Santa Clarita joins other Southern California communities in taking a stand against SB 54. Several individual communities in Orange County, California, have already formally opposed the state law, including Huntington Beach, Fountain Valley, Newport Beach, Mission Viejo and Los Alamitos, which was the first to oppose the measure in March. Santa Clarita is the first community in Los Angeles County to voice its opposition, the LA Times noted.

The Board of Supervisors in San Diego and Orange counties have also voted to join the federal lawsuit against the Trump administration. The lawsuit, which was filed by the U.S. Department of Justice, contends that the California laws violate the Supremacy Clause of the U.S. Constitution, which prohibits states from interfering with federal law. On Friday, California Attorney General Xavier Becerra filed a motion to dismiss the lawsuit, arguing the California laws “work in concert — not conflict — with the federal laws and are fully constitutional.”

The California communities’ opposition to the state law has taken different forms. Huntington Beach filed a lawsuit against the state over the policy, and Fountain Valley and other cities are joining a court brief in support of the Trump administration’s lawsuit prepared by the Immigration Reform Law Institute. Los Alamitos passed an ordinance exempting itself from the state law, which the American Civil Liberties Union is now challenging in court.

Other communities have opted for a more symbolic approach. Costa Mesa, California, merely passed a resolution opposing the measure, which Councilman Allan Mansoor told the LA Times was more about making a “statement.”

“That we support upholding our laws,” Mansoor told the Times when asked what the resolution communicates. “It’s a statement to the legislature, to the governor, to the citizens who live in our community.”

Santa Clarita’s vote will also be largely symbolic, the Times noted. Though the resolution stipulates that a brief should be filed in support of the Trump administration’s lawsuit “if and when appropriate,” the city contracts its law enforcement with the Los Angeles County Sheriff’s Department and is thus bound to their immigration policies.

California’s immigration legislation has a large effect on the undocumented population in the U.S., as the state is home to nearly 25% of the country’s undocumented immigrants — or around 2 million as of 2014, according to the Public Policy Institute of California — and it appears unlikely the sanctuary policies will be curbed as a result of the communities’ largely symbolic opposition. That symbolism, however, could still help the anti-immigration cause by further galvanizing conservative voters on immigration and sowing division in what’s typically viewed as one of the U.S.’s most liberal states.

“This is an opportunity to mobilize the conservative base around the issue that most animates the conservative base, which is immigration,” Raphael Sonenshein, executive director of the Pat Brown Institute for Public Affairs at California State University, Los Angeles, told the LA Times. “It doesn’t mean that the City Council has the power to change anything right now … but it elevates the issue and certainly Republicans see it as an issue that might bring people to the polls.”

The legal actions that have ensued — the Huntington Beach lawsuit and the ACLU suit against Los Alamitos, along with any other future lawsuits — could also spark a national legal debate over what rights cities have to abide by state vs. federal law.

“Although this is local politics in action, it’s most likely going to require a state or national solution,” Garrick Percival, a political science professor at San Jose State University, told the Mercury News. Percival said it was “very likely” the California community revolts would end up in the state or U.S. Supreme Court.

“It’s both symbolic and legal,” Percival said. “We have real disputes here where the question is, how much discretion do cities have to abide by state law, but also federal law.”

Trump has spoken out in favor of the revolting California jurisdictions, tweeting in March and April to show his support for the “brave citizens in Orange County” and San Diego County.

“There is a Revolution going on in California. Soooo many Sanctuary areas want OUT of this ridiculous, crime infested & breeding concept,” Trump tweeted in April. “Jerry Brown is trying to back out of the National Guard at the Border, but the people of the State are not happy. Want Security & Safety NOW!”

Despite Trump’s tweet, however, a majority of Californians appear to be supportive of the state’s pro-sanctuary policies. According to a study conducted by the University of California at Berkeley’s Institute of Governmental Studies in April, 56% of California voters favored the California law. Large majorities of Californians in Los Angeles County, San Diego County and the San Francisco Bay Area in particular were in support of the law, while voters in Orange County and areas of Northern California outside the Bay Area were more likely to oppose the measure.

California’s ongoing efforts to enforce its sanctuary protections under the Trump administration are reportedly making a difference, even before SB 54 took effect on Jan. 1. According to a report published by the Migration Policy Institute in May, California’s share of overall arrests by U.S. Immigration and Customs Enforcement declined from 23% in fiscal year 2013 to 14% in fiscal year 2017. The state’s efforts are part of a broader trend of sanctuary policies limiting ICE enforcement, the study noted.

The Nevada Supreme Court heard arguments Tuesday about a proposed ballot measure that would ban sanctuary cities, even though no sanctuary cities exist in the state. The ballot measure would amend the state Constitution to stipulate that state and local governments cannot “enact a law or otherwise adopt, enforce or endorse a policy which prohibits, limits or discourages cooperation with the enforcement of the immigration laws of the United States.”

The ACLU, who brought the lawsuit against the ballot measure, argued that the proposed measure is overly broad and could mislead voters into approving sweeping immigration restrictions.

State lawmakers in other states have also been trying to enact anti-sanctuary policies through legislation. In April, Iowa passed a bill that withholds state funds from jurisdictions that do not cooperate with federal immigration authorities, while Virginia Gov. Ralph Northam vetoed anti-sanctuary legislation.

In Tennessee, where sanctuary cities have already been banned since 2009, lawmakers are trying to strengthen the law even further with legislation that would require sheriff’s departments to detain suspected undocumented immigrants — even in cases of mistaken identity where the sheriffs have evidence showing the suspect’s information does not match the information sent by ICE. The legislation, which passed the legislature in April and is now being considered by Gov. Bill Haslam, also prevents cities and counties from enacting sanctuary policies and withholds state funds from those who do so.