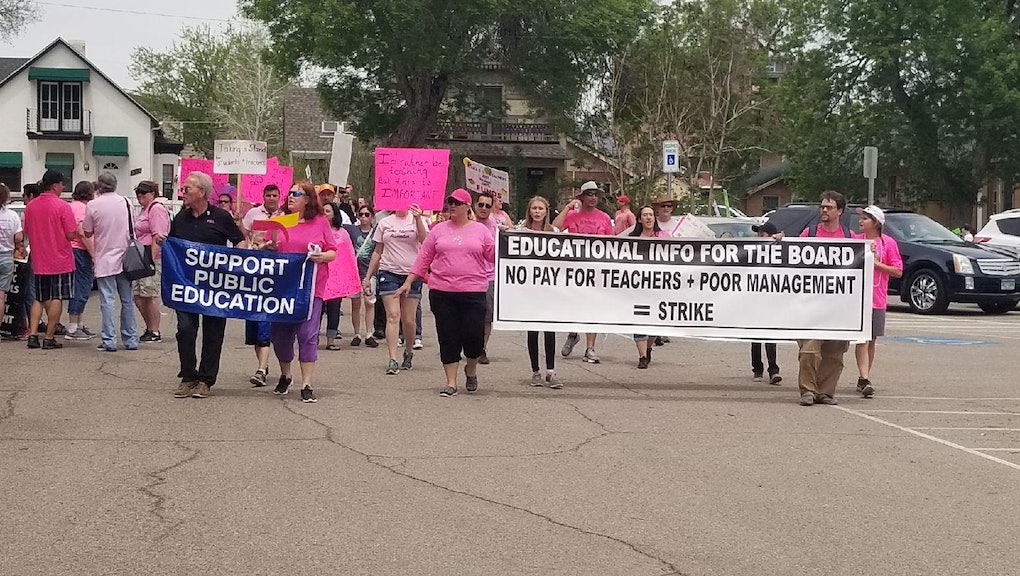 In Colorado, a “union town” rallies around striking teachers — regardless of politics

The town of Pueblo, Colorado, sits squarely in the middle of the state’s polarized political extremes, with the deeply conservative and largely Evangelical town of Colorado Springs to the north and liberal, urban Denver less than a two-hour drive down the road. So when Pueblo’s teachers decided to walk out of classrooms and into the blistering 95-degree Colorado heat on Monday, they became another symbol of the national forces that have galvanized thousands of teachers to strike in states like West Virginia, Kentucky and Arizona this year.

All schools in the Pueblo School District have been closed since Monday, when educators, armed with signs and clad in pink T-shirts, first began picketing outside the Board of Education’s administrative building and on heavily-trafficked streets throughout the city. The labor action is the first of its kind to be taken up by teachers in the state in 24 years.

Mike Lonsberry, a social studies teacher at East High School, said that while teachers would “much rather be in our classrooms, doing our jobs and working with the students,” the district’s long-standing reluctance to dole out pay raises has forced teachers’ hands.

After all, he said, Pueblo is a union town at its core.

“Pueblo County went for Trump in 2016, but it’s a blue collar town, it’s a working-class town, and so there really is a strong union presence here, it’s just been sort of hibernating,” Lonsberry said. “We’re going to take this as long as it takes — the ball is in the district’s court.”

District teachers’ decision to walk out of classrooms came after officials shot down a third-party researcher’s recommendation that they receive a 2% cost of living bump that would have been retroactively applied to the 2017-2018 school year. Despite the researcher’s finding that the district had enough money to shoulder the raises, in addition to an extra $30 a month to be applied to teachers’ health care insurance, Pueblo officials have balked at the costs, claiming that they are out of the district’s budget and would add to an already-existing $3.6 million deficit.

According to the Colorado Department of Education, teachers in Pueblo received an average salary of $47,617 during the 2017-18 school year — well below the $52,728 average annual salary for teachers in Colorado, and the national average, which was $59,660 in 2017, according to the National Education Association’s 2018 report.

While the Pueblo Education Association’s president, Suzanne Ethredge, previously told the Denver Post that she hoped the strike would not last longer than three to five days, she told Mic in a phone interview on Thursday — the fourth day of the strike — that it’s now likely to stretch on for “another five days, at this point.”

“The good thing that’s come out of this, and the thing I’m really excited about, is the turnout we had in that our teachers and our paraprofessionals are finding their voices, and realizing that they can stand up and be heard,” she said.

Ethredge, who was a teacher in the Pueblo school district for 22 years, said that members of the union’s bargaining committee showed up at the city’s education building prepared to bargain on Thursday, only to be told that administrators wouldn’t be able to assemble a bargaining committee until Saturday.

“It very much feels like this is not a priority for our district,” Ethredge said. “They’re just willing to let it linger.”

According to Lonsberry, there’s no question among teachers that their demands will eventually be met; it’s just a matter of how long district officials will be able to hold out this time before giving in — and what the consequences from that apparent lack of commitment to teachers will be.

“This is actually the third year in a row we’ve had to go through fact-finding, and each time the district drags its feet a little bit longer before awarding us what the fact-finder determined,” he said. “The teachers here — we’re all educated, certified professionals, and we’ve just been pushed to the brink by a district that doesn’t value us, that doesn’t respect us, that doesn’t want to treat us with dignity.”