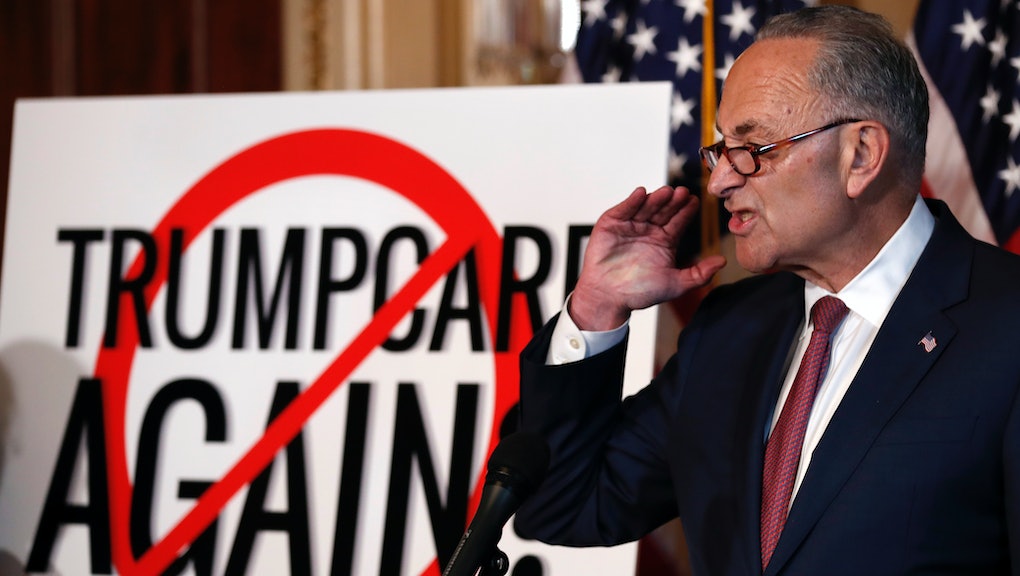 Democratic candidates are focused on issues such as health care, despite what pundits say

The Democratic Party has faced a tide of criticism in recent months over the perceived narrative that Democrats don’t have a cohesive message for the upcoming midterms and are focused too much on President Donald Trump’s scandals rather than on issues such as health care.

“In the past few months, Democrats have appeared less focused on the economic and health care battles that most engage anti-Trump voters,” Greenberg wrote.

Yet the criticism and building narrative just don’t add up.

While the media has been covering the Russia investigation and other Trump scandals, and the sphere of political Twitter influencers has been talking about impeachment, Democratic candidates in House and Senate races across the country have been fully focused on health care in their ads.

“If you only pay attention to Twitter, you’d think this election was about the Russians paying to hide their puppet getting spanked,” Jesse Ferguson, a Democratic strategist who was a top communication aide on Hillary Clinton’s campaign, said in an interview. “But if you pay attention to what’s going on in communities, you realize it’s a wholesale rejection of the Republican agenda for rewarding the wealthy and well-connected and making the middle class pay the price.”

Just a brief look through recent ads from Democratic candidates shows a laser-focus on health care, an issue that could benefit Democrats in the upcoming midterms.

“In the polling, when you ask people what’s the most important issue, health care comes up at the top or near the top,” Peter Hart, a longtime Democratic pollster who helps conduct the NBC/Wall Street Journal poll, said in an interview.

A recent HuffPost/YouGov poll from early April found that health care is the top issue for voters in the midterm elections. Nearly a third, or 30%, of voters said health care is their top issue, while guns and immigration tied for second place, with 25% each.

“The pundits who are making this argument seem to not understand the difference between an earned-media campaign and a paid-media campaign, and that’s what it really boils down to,” said Shripal Shah, a vice president at American Bridge, a Democratic opposition research firm.

While “earned media” — or news coverage — focuses on Russia, paid media — or ads and other communication campaigns spend money on — is focused on health care.

Katie Hill, a Democrat running to oust a Republican in California’s 25th District, released an ad Wednesday about her own family’s struggles with finding affordable health care.

“Just before we were married, my husband Kenny’s lung collapsed. We were terrified, not just for his life but because he didn’t have health insurance. He had to have emergency surgery and was hospitalized for 11 days. Thankfully, he recovered, but we had to start our lives together with $200,000 in medical debt,” Hill says in the ad.

“We have a moral duty to ensure that every American gets the care they need at a price they can afford,” Hill adds. “I’ll fight to stop the Republican attacks on health care and create a system that works for all of us, not just big health insurance companies.”

“When our son, Jack, was 12, a rare infection almost took his life,” Londrigan says in the ad. “After intensive care for 21 days and receiving last rites twice, Jack pulled through. Donald Trump’s health care plan would have bankrupted us, because it allows insurance companies to cut off families with sick kids. That’s not right. Donald Trump is dangerous and it’s time we had a Congress that will stand up to him.”

Democratic Rep. Kyrsten Sinema, who is running for the open Senate seat in Arizona, also released an ad this week on health care.

“Growing up, our family struggled to make ends meet, and we didn’t have health insurance,” Sinema says in the ad. “No child should go without a doctor, and no family should be bankrupted by medical bills.”

“I sponsored this message because every American deserves quality, affordable health care,” Sinema says at the end of the spot.

Democratic Rep. Jacky Rosen, who is running for Senate in Nevada, released an ad on Monday about how voters across her state talk about health care, and that’s what she’s focused on, too.

“Obamacare has real problems, but we should be working together to fix it and bring down costs,” Rosen says. “Repealing it is just partisan politics and that hurts Nevada.”

Even Democratic-aligned outside groups are focused on health care messaging.

The ad even tackles the issue of trying to break through the noise in Washington, D.C. — leading to the ad’s name.

“With all the noise and chaos in Washington, actions still speak louder than words,” a narrator says in the ad, which shows images of cable news commentators on all sides of the political spectrum. “In Congress, Claudia Tenney voted for the disastrous health care plan, which, according to AARP, would impose an age tax, charging older Americans up to five times more for coverage, while shifting the burden onto the middle class. Her actions say it loud and clear: Tenney is not for you.”

“To pundits asking about the Democratic message, turn off cable news and start paying attention to what’s actually happening on the air in key races,” Guy Cecil, the chairman of the Democratic super PAC Priorities USA, tweeted on Wednesday.