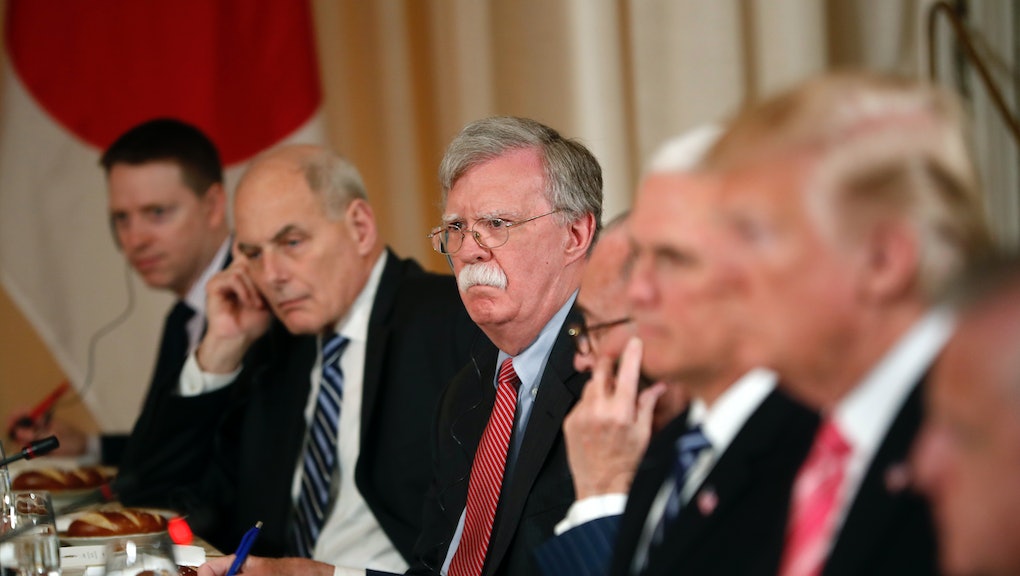 White House national security adviser John Bolton made headlines upon his appointment for his history of controversial opinions on foreign policy — but Bolton declined to say Sunday whether he’s brought those opinions with him to the White House.

In an interview on CNN’s State of the Union Sunday, Bolton was asked about his past hawkish comments on Iran in the wake of President Donald Trump pulling out of the Iran nuclear deal. Bolton advocated for pre-emptive strikes on Iran in a 2015 op-ed for the New York Times, and has long pushed for regime change in the region. In July, Bolton told the Iranian fringe dissident group Mujahedeen Khalq that “the declared policy of the United States should be the overthrow of the mullahs’ regime in Tehran.”

On Sunday, however, Bolton remained evasive about whether those views still held now that he’s ascended to the White House.

“I’ve written and said a lot of things over the years when I was a complete free agent. I certainly stand by what I said at the time, but those are my opinions then,” Bolton said Sunday. “The circumstance I’m in now is that I’m the national security adviser to the president, I’m not the national security decision maker. He makes the decisions, and the advice I give him is between us.”

“Is it fair to anticipate that the advice you’re giving is matched with the advice you gave the U.S. when you were a free agent?” host Jake Tapper asked.

Bolton has also long been a proponent of the U.S. withdrawing from the Iran nuclear deal — a position he remained enthusiastic about now that the U.S. has pulled out of the deal.

“The rationale for getting out of the deal is that it was contrary to American national security interests when we entered into it, and it hasn’t gotten any better with age,” Bolton said Sunday, citing what he believed to be the “fundamental deficiencies” with the deal, such as the economic benefits to Iran and ability to continue their nuclear and ballistic missile programs in a limited fashion.

Bolton also highlighted the U.S.’s ability to resume sanctions against Iran now that they’ve pulled out of the nuclear deal — and suggested sanctions could be coming against the U.S.’s allies as well.

When announcing his decision to pull out of the nuclear deal, Trump warned that “any nation that helps Iran in its quest for nuclear weapons could also be strongly sanctioned by the United States.”

Bolton said Sunday that it’s “possible” that could include European companies that do business with Iran.

“The answer is: it’s possible. It depends on the conduct of other governments,” Bolton said when asked if the U.S. would impose sanctions on European companies.

The European Union could have a lot to lose if forced to pull out of their economic dealings with Iran. The E.U. exported €10.8 billion in goods to Iran in 2017, and a number of European companies, including Siemens and Airbus, have signed deals with Iran. European leaders have signaled their commitment to the nuclear deal despite the U.S.’s withdrawal — though Bolton speculated Sunday that commitment could waver in the future.

“I think the Europeans, we’ll see, but it’s ultimately in their interest to come along,” Bolton said Sunday.

“I think at the moment there’s some feeling in Europe that they’re very surprised we got out of [the deal], very surprised at the reimposition of strict sanctions,” Bolton added. “I think that will sink in, and we’ll see what happens then.”