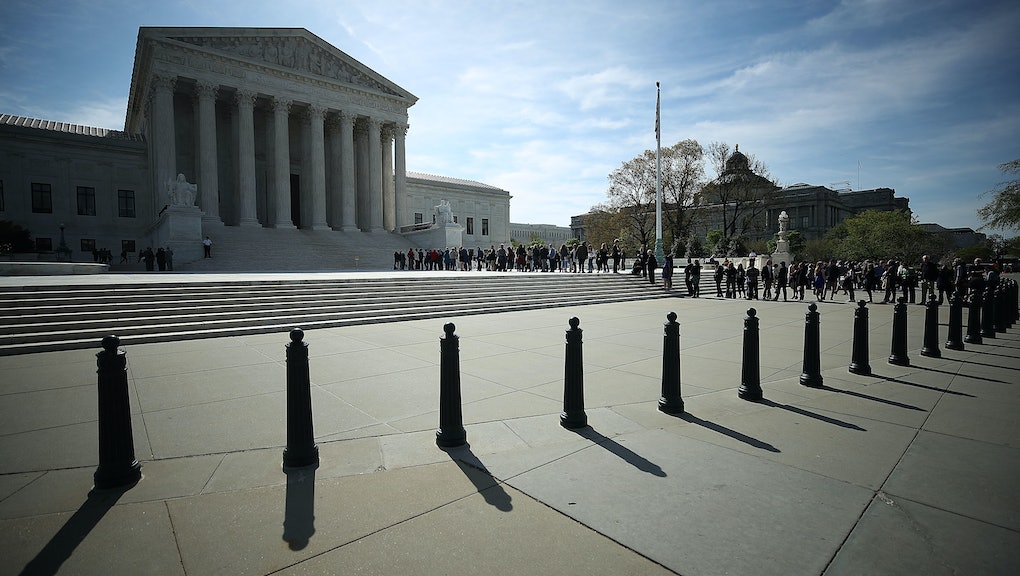 The U.S. Supreme Court is entering the final weeks of its 2017-18 session, and with no more arguments left to be heard, it’s time for the court to issue some of its most highly anticipated decisions.

The court announced one of its first major decisions on Monday, with a ruling in favor of sports gambling that could have far-reaching implications. But with six weeks left to go in this year’s session, many important cases still hang in the balance.

Upcoming decisions expected by the court take on some of the most controversial issues facing the U.S. today, including “religious liberty,” voting rights — and even Trump’s notorious “travel ban.”

Here are some of the biggest cases awaiting decisions from the Supreme Court this session.

In his opinion for the court, Judge Antonin Scalia declared political gerrymandering claims are “nonjusticiable.” Judge Anthony Kennedy suggested in a concurring opinion, however, that though “no such standard [for ruling gerrymandering unconstitutional] has emerged in that case,” that “should not be taken to prove that none will emerge in the future” — a future that may now have arrived.

The court will also consider two other prominent voting-based cases this term. Husted v. A. Philip Randolph Institute will take on the legality of Ohio’s voter purging policy. As part of the policy, voters who have not voted in the past two years are sent a notice asking them to confirm their registration. Those who do not respond and do not vote within the ensuing four years are then removed from the voter rolls, a policy that civil rights groups challenging the policy claim violates the National Voter Registration Act of 1993. The plaintiffs also noted the policy is particularly “unreasonable” as compared with those in other states.

The court is also considering Minnesota Voters Alliance v. Mansky, which challenges a Minnesota policy that prohibits voters from wearing political apparel to the polls as being in violation of the First Amendment. The policy was brought into court after Minnesota Voters Alliance executive director Andrew Cilek was temporarily prevented from voting while wearing a Tea Party logo t-shirt and a button advocating for voter ID laws.

National Institute of Family and Life Advocates v. Becerra takes on two divisive issues: Reproductive rights and the First Amendment. The case concerns California’s Reproductive FACT Act, which requires licensed facilities providing prenatal or family planning care and services to clearly inform clients about the state’s low-cost family planning services, which include abortions. Unlicensed facilities are also required to disclose the fact that they are not licensed by the state.

The state of California is being challenged by “crisis pregnancy centers,” which are pro-life centers that provide certain pregnancy services, but are largely aimed at steering women away from seeking abortions. Many facilities are unlicensed and do not have actual medical professionals on staff, but nevertheless often portray themselves as medical facilities. The pro-life groups are challenging California’s policy on First Amendment grounds, claiming that the law violates their right to free speech.

Ever since President Donald Trump issued his first “travel ban” applying to several countries, many of which are predominantly Muslim, the controversial policy has been tied up in the court system. Several federal courts have already struck down the divisive travel restrictions — and the Supreme Court will soon be issuing its own ruling.

Trump v. Hawaii concerns the iteration of Trump’s travel ban released in September 2017, in which the president issued a proclamation that put restrictions on travel from Chad, Iran, Libya, North Korea, Syria, Venezuela and Yemen. Though federal courts have not been kind to the policy, the ban may find more sympathy among the Supreme Court justices, who allowed the travel ban to go into effect in December 2017 while the Supreme Court case was pending. The court’s more conservative justices appeared to back the policy during oral arguments in the case in April, the Washington Post noted.

One of the other most high-profile cases awaiting a Supreme Court decision is Masterpiece Cakeshop, Ltd. v. Colorado Civil Rights Commission. The case concerns “religious liberty,” as Colorado cake shop owner Jack C. Phillips refused to bake a cake for a same-sex wedding, contending that it violated his religious beliefs. The couple then filed for charges of discrimination with the Colorado Civil Rights Commission, as Colorado law prohibits discrimination on the basis of sexual orientation in places of public accommodation, while Philips contended that being forced to bake the cake would violate his rights to free speech and to freely practice his religion.

“Religious liberty” has become a hot-button issue in recent years, as religious groups and individuals have pointed to their beliefs as a basis to discriminate against minority groups. Trump has been an advocate for religious liberty throughout his presidency; in May 2017, the president signed an executive order that allowed religious groups to endorse political candidates and deny insurance coverage for contraception. Trump then signed another executive order in May 2018 establishing a White House Faith and Opportunity Initiative, which the order claimed would “reduce the burdens on the exercise of free religion.”

The Supreme Court has ruled in favor of religious liberty in the past. In 2014, the court ruled in Burwell v. Hobby Lobby Stores that Hobby Lobby, a for-profit company whose business practices are tied to the owners’ Christian faith, is legally able to deny employees health coverage for contraception.

Labor contracts and unions are also at the center of some of the court’s most influential impending decisions. Janus v. American Federation of State, County, and Municipal Employees, Council 31 concerns union rules that require employees in workplaces covered by public sector unions who aren’t in the union to still pay dues, as they benefit from the union’s collective bargaining. The policy was challenged in Illinois by Mark Janus, a child support specialist for the Illinois Department of Healthcare and Family Services.

The Supreme Court previously upheld the non-member dues policy in 1977, when it ruled in Abood v. Detroit Board of Education that though non-members cannot be forced to fund a union’s political activities, it may be required to fund “collective bargaining, contract administration, and grievance adjustment purposes.” More recently, a similar case concerning the union policy in California divided the court 4-4 in 2016, when the court was one justice short following Scalia’s death.

The Janus decision could have broad implications for public sector unions, which covered 7.2 million employees, or 34.4% of public sector workers, in 2017. Should the court rule against the union, it could further weaken union organizing and bargaining — something that could disparately hurt female workers and workers of color, who made up approximately two-thirds of union members ages 18 to 64 in 2017.

Another major labor decision is expected in Epic Systems Corp. v. Lewis. The case, which was merged with Ernst & Young v. Morris and National Labor Relations Board v. Murphy Oil USA, Inc., concerns arbitration agreements in labor contracts, which require employees to resolve disputes through individual arbitration and waive their right to participate in class action lawsuits or other legal proceedings.

The decision could have far-reaching effects. According to the Economic Policy Institute, approximately 60 million American workers are subject to mandatory employment arbitration procedures. A decision in favor of workers could also affect the ongoing #MeToo movement, as arbitration clauses have often prevented female employees from taking appropriate action against sexual harassment.

“Mandatory arbitration clauses in negotiating away the civil rights of an individual are just a bad idea,” Anita Hill, an antidiscrimination professor at Brandeis University who previously accused Supreme Court Justice Clarence Thomas of sexual harassment, told TIME Magazine. “What we’re talking about here with harassment is a civil rights violation. Our policy is driven from the point of view of the people, the men, who are more powerful and engaging in abusive behavior. Women are skeptical coming forward because they don’t trust the procedures.”