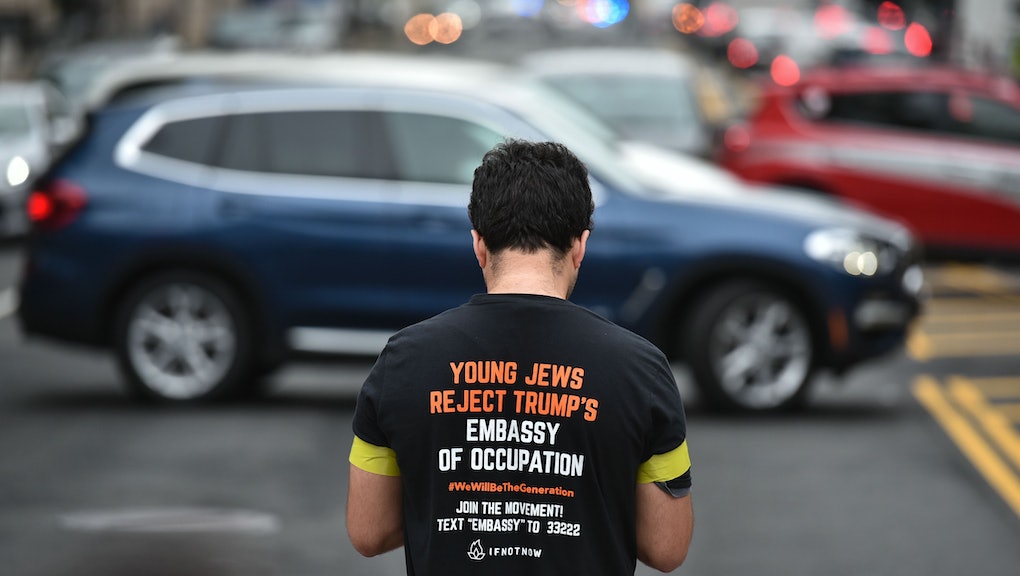 Around 100 young Jewish-Americans gathered in front of the Trump International Hotel on Monday to protest a decision by the Trump administration that is supposedly to benefit the Jewish people.

“Today we came out in front of the Trump Hotel in Washington, D.C., to make sure that an American-Jewish voice comes out in this moment,” said Maiya Zwerling, a volunteer leader with the group If Not Now, made up of young American-Jewish people who oppose the American-Jewish community’s support for Israel’s occupation of Palestine.

On Monday the U.S. opened the doors on its new embassy in Jerusalem, breaking with decades-long tradition of keeping the U.S. embassy in Tel Aviv until the dispute between Israel and Palestine is settled.

The move coincided with a perfect storm of escalating tensions in the region, as Gazans capped off the final day of weekly protests since March at the Israeli border. Nearly 50 Gazans died at the hands of Israeli Defense Forces during the weeks of demonstrations.

Monday’s protests were by far the deadliest, with more than 50 Gazans killed in just one day, as of 5 p.m. Eastern, more than all of the previous protests this year combined.

At the same time as the clashes in Gaza, a delegation from the U.S. including Ivanka Trump and Jared Kushner attended an opulent ceremony in Jerusalem that stood is stark contrast to the violence happening at the border. Among the guests attending with the American delegation were two evangelical pastors - one of whom has a history of making controversial and anti-semitic remarks, adding to the surreality of an event billed as a major victory for the American Jewish community.

Tensions weren’t just running high in the region, however. The group of young Jewish Americans organized with If Not Now descended on Washington, D.C., where they blocked traffic for more than an hour and a half in front of Trump International Hotel. The group erected what they called an “embassy of freedom” to protest Trump’s embassy decision as well as Israel’s broader treatment of stateless Palestinians, from the killing of Palestinian protesters in Gaza to the ongoing Israeli occupation of the West Bank.

“Young Jews are making it pretty clear if you stand against racism, if you stand against Islamophobia, then you better be standing against the occupation,” Zwerling said. “If you believe in rights for all people, the occupation is one of the first places that you can go, that shows that there are really clear different rights depending on the religion that you were born into, the families that you were born into.”

The group directed their criticism not only towards the president himself, but also at the many politicians and Jewish-American institutions that supported it. On Monday, Democratic Senate Minority Leader Chuck Schumer, a frequent critic of Trump, lauded the decision to move the U.S. embassy in a statement.

“In a long overdue move, we have moved our embassy to Jerusalem,” Schumer said. “Every nation should have the right to choose its capital. I sponsored legislation to do this two decades ago, and I applaud President Trump for doing it.”

Schumer’s position is emblematic of the deep divide within the American left over the issue of Israel and the occupation. For years tensions have been building between opposing forces within the Democratic party on the issue. On one side, the base and the progressive movement oppose the violence Israeli forces have inflicted on Palestinians in the region. On the other are those who believe the Democratic Party should stand behind it’s key Middle East ally.

“It’s intensely disappointing to see a leader like Chuck Schumer, who claims to be part of the resistance to Trump, claims to be the leader of the resistance, to then turn around and just whole heartedly applaud a move that then serves to only further entrench the occupation,” said Ethan Miller, another organizer with If Not Now. “It’s against our Jewish values and it’s against progressive values as well.”

For decades the Democratic Party has walked a fine line on the issue of support for the state of Israel as members of the American-Jewish diaspora have historically favored Democrats over Republicans by overwhelming margins.

Republicans by contrast, have tried to make inroads with American-Jewish voters by trying to outflank Democrats in their support for the state of Israel and its policies.

At the Democratic National Convention in 2012, the tensions within the party over the issue spilled out into the open, when delegates entered into a tense debate on live television over whether or not to add a provision in the Democratic Party platform, recognizing Jerusalem as the one true capital of Israel.

In the end, the amendment was adopted over the objections of many progressive members of the party. But much has changed within the American left since then, spurred, in part, by a massive shift in public opinion on the issue among younger Americans and young progressives in particular.

A 2016 Pew poll found that, while older generations’ support for the state of Israel has remained about the same or gotten stronger over the last decade, millennials increasingly sympathize more with stateless Palestinians in the conflict. That trend is particularly pronounced among young Jewish-Americans. One study that measured support from Jewish college students between 2010 and 2016, found that sympathy for Palestinians increased more than 600%.

Jim Zogby, a member of the Arab American Institute as well as a longtime member of the Democratic National Committee, warned that Democrats will soon have to reckon with those changes.

“Democrats need to start paying attention to where the demographic shifts in their own party are, on this issue,” Zogby said in an interview with Mic.

For now, progressives are still struggling with just how to address the subject. In September 2017, Daniel Biss, then a progressive challenger seeking the Democratic nomination for governor in Illinois, was forced to break ties with his running mate, Chicago alderman Carlos Ramirez-Rosa, over the latter’s support for a boycott of the state of Israel. That move prompted outrage from Illinois progressives and Biss eventually went on to lose the nomination to the more moderate candidate, billionaire J.B. Pritzker.

But those hoping to shift progressive opinion toward support for Palestinians have found two unlikely allies in Trump and Israeli Prime Minister Benjamin Netanyahu.

“Netanyahu and Trump are doing more to make the issue of the occupation and make the issue of unquestioning support for Israel a partisan issue than any of us ever could on our own.” Miller said. “The policies of the Netanyahu administration are the same policies that Trump is pushing here. Pushing for a border wall, pushing for bans on the freedom of movement based on people’s religious or national identities — these are the policies that I think the American Jewish public and the American public at large are waking up to now but have been a reality for so many years in Israel.”

Since Trump took office, Netanyahu has worked assiduously to influence the decisions of the erratic American president. Just days before Trump was set to make a major decision on another foreign policy matter of critical importance to Israel — the Iran nuclear agreement — Netanyahu gave a lengthy televised speech railing against the deal. Trump ultimately ended up siding with Netanyahu against the wishes of other U.S. allies and pulled out of the agreement.

The continued relationship between Trump and Netanyahu could continue to put Democratic supporters of current Israeli policy in a tight spot. And groups like If Not Now say they will continue to show up to push them on the issue.