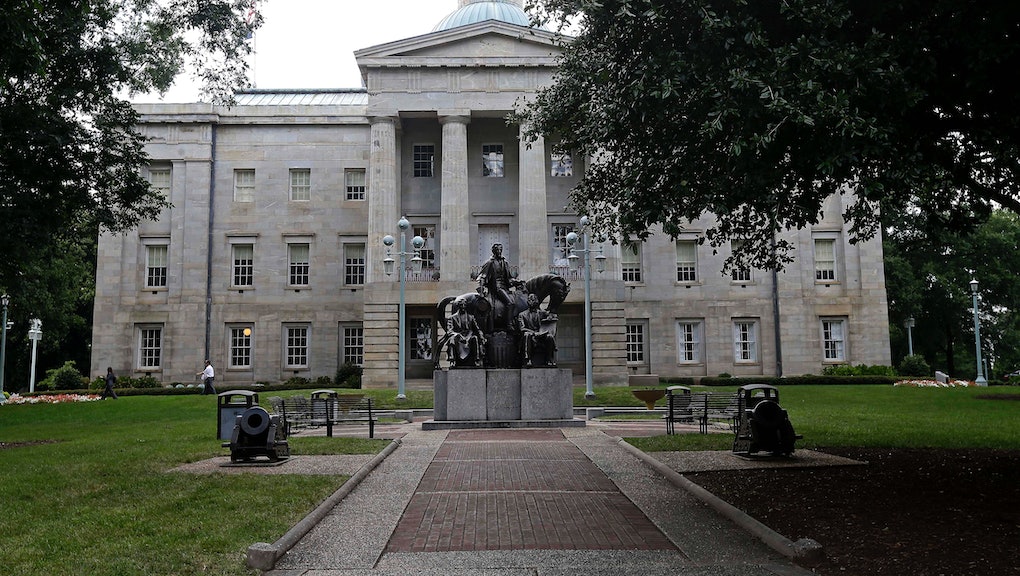 As North Carolina’s legislature prepares to reconvene, teachers plan to walk out

On the heels of the wave of teachers strikes sweeping red states in 2018, educators in North Carolina are planning a school walkout of their own on Wednesday — the same day that the state’s legislature will come back into session.

Unlike West Virginia, Oklahoma, Arizona and Colorado, which have seen teachers unions lead definitive strike efforts in protest of widespread cuts to education spending, North Carolina teachers have designated the May 16 walkout an “advocacy day.” Not only is it illegal to strike in North Carolina, said Melissa Easley, a teacher in the state’s Charlotte-Mecklenburg school district, but teachers will also have to use one of their personal days in order to participate in the walkout, and will be charged a $50 fee by the district for taking the day.

“Educators are paying to miss the day and exercising their rights as Americans to assemble and advocate for education,” she said. “People are feeling a mix of emotions including excited, anxious and hopeful. This is the first time in North Carolina that teachers have come together as one group, and in one voice said that this is enough.”

Interest is so high in participating in the “March For Students and Rally For Respect,” as the event has been officially dubbed, that school closures are already widespread in North Carolina’s Durham Public Schools, Chapel Hill-Carrboro City Schools and the Wake County Public School System, among other districts.

After the beginning of the Great Recession in 2008, North Carolina was one of several states to enact sharp tax cuts, which have resulted in a precipitous drop in the state’s education funding in the years since. According to Easley, teachers have been shouldering the burden of those tax cuts ever since, with school items such as “notebooks, pencils, pens as well as personal items, like clothing and food, often supplied by educators.”

In a post for his blog “Notes From the Chalkboard,” North Carolina teacher Justin Parmenter elaborated on the ways the state’s public schools have been hurting for lack of adequate funding.

Classes with so many children that some have to sit on the floor. Other classes taking place in closets. Blind students who can’t get books in Braille. History textbooks that have George Bush as president. Kindergarten classes with 30 students and no assistant. Teachers forced to stop class to attend to special medical needs because there’s no nurse on duty.

In addition to increased spending on schools and students, North Carolina’s teachers also want lawmakers to reinvest in education in order to ensure that teaching jobs in North Carolina stay competitive.

According to Easley, existing education compensation packages in the state are not competitive enough to keep veteran teachers in the classroom when compared to those from surrounding states and the private sector.

“It reduces the amount of people entering the profession of education or beginning their careers in North Carolina,” she said.

According to a recent report by the National Education Association, North Carolina teachers currently make an average of $49,970 a year — placing them 39th in the country in terms of average teacher salary for 2017.