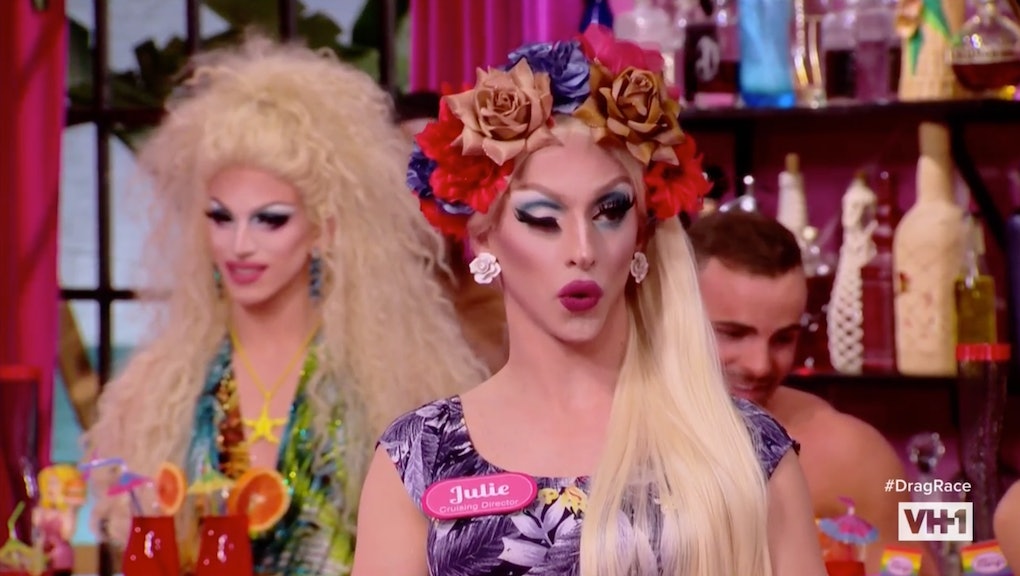 Hello, my cantankerous little cantaloupes. Welcome to Fundamental Reading, the weekly column where we chat about RuPaul’s Drag Race.

After season 10’s most controversial and complicated queen, The Vixen, was eliminated in episode eight, it was clear Drag Race would have to wrangle a new narrative through line to keep the rest of the season interesting. The Vixen was unquestionably the season’s greatest source of conflict and intrigue — and episode 10’s blandness in comparison to the rest of the season indicates we might be in for a snoozy last few episodes without her.

This void left by The Vixen’s elimination — and that of the equally entertaining Monique Heart, who was dismissed in episode seven — is something Monét brought up in the workroom, saying the space felt emptier than usual.

As a hand-waving distraction, for this week’s mini challenge, RuPaul trotted out a horde of muscular men — including trans model Laith Ashley as man No. 7 — in various pairs of some underwear brand whose name I’ve already forgotten. With the men divided into two groups, the queens played what can only be described as a strip version of memory. One by one, each queen instructed a man from each group to drop their trousers. The queen got a point if their underwear matched.

Aquaria won, giving her the power to cast everyone’s parts in this week’s main event: an acting challenge in a parody of the HBO sci-fi show Westworld, titled Breastworld. (You can take a moment here to let out a long groan, if you need one.)

Aquaria let everyone choose their own parts, leaving her with a role that had few lines compared to some of the other girls. This led Aquaria to say in a confessional that she “fucked up” assigning parts, which made it seem like she was about to flop in the main challenge. Ultimately, this was a fabricated, short-lived source of drama, because Aquaria did great with the few lines she had. Her goofy, very physical portrayal of Dyslexia — a blonde, robotic waitress — was one of the skit’s few highlights.

That’s not saying much, though, because this main challenge was overlong and wasn’t particularly funny. If you had to rank everyone’s performances on a scale of one to 10, everyone fell squarely in the four-to-seven range; nobody really knocked it out of the park, but nobody totally flopped. I never thought I’d say this, but I was thrilled when Randy Rainbow showed up because he ushered in Breastworld’s merciful end.

I began to suspect that in the absence of organic drama, Drag Race would have to rely on sharp editing and twists in the show’s format to elicit interest, and that seemed to carry through in the episode’s final moments. Ru deemed Asia’s portrayal of the Sarah Palin-esque character the winner of the week and damned Kameron Michaels and Eureka, whose sleepy performances were especially one-note, to the bottom two.

Season 10 has been filled with great lip syncs, but this one, to Patti LaBelle’s “New Attitude,” was especially close. Kameron maintained her twitchy, neurotic movements from the old-lady-themed runway (more on that below), making her look like a borderline-drunk real estate agent at an especially gregarious karaoke night. Eureka maintained the strong runway presence she always has, removing her heavy coat to reveal a bright purple jumpsuit.

The best part of the lip sync, however, was a redemptive moment for Eureka that harkened back to her knee injury in season nine. During the dramatic peak of the song, Eureka leaped into the air, dropping to the ground in a full split — the very same move that ended her last run on Drag Race — but executed it flawlessly this time around. Determined to not let Eureka take the spotlight, Kameron dropped into a middle split at the very same time.

Ultimately, perhaps in the absence of interpersonal drama between the queens, Ru injected a bit of her own into this week’s episode when she announced no one would be eliminated.

Not to get too paranoid, but I can’t help but think RuPaul made this decision in part to up the shock value in an otherwise boring episode. To the audience, the lip sync looked to be an even tie, but it’s hard to know whether the editing pushed that narrative more than was actually the case. Maybe I just miss the dynamism of the season’s earlier episodes.

As cynical as I’ve cast it, Ru’s decision to keep both Eureka and Kameron around isn’t hard to justify: Eureka has been a frontrunner this entire season, so it didn’t really make sense to send her home for one mediocre week. And, unlike Eureka, this was Kameron’s first time in the bottom two. She won the challenge last week, so did it really make sense to send her home now? If one queen did poorly in the lip sync, that would’ve been enough to tip the scales, but both Kameron and Eureka brought their A-games.

Really, this episode just illustrated yet again how strong this season’s crop of queens has been. Good luck to Ru in figuring out who is most deserving. Right now, it’s anybody’s game.

Before we get to the recap of this week’s runway, a quick shoutout to guest judge Ilana Glazer of Broad City. She and Abbi Jacobson, her co-star and co-creator, were clearly both thrilled to be there, but Glazer was over the moon. When Ru emerged on the runway in her gold glittery gown, Glazer simply couldn’t contain herself, literally grasping at her chest for air. It was delightful.

Here’s how everyone did in the “Silver Foxy” runway challenge, in the order they appeared.

Miz Cracker’s look consisted of a knee-length, long-sleeved silver dress, accessorized with a fur wrap and large, Iris Apfel-esque glasses. It was glam and polished, but surprisingly straightforward in comparison to her vomiting skull accessory last week.

Asia turned up the camp this week, emerging in a look that told a story of an elderly drag queen at the end of a long career, ready to kick back with some HGTV. In place of glamorous stilettos was a pair of sandals pulled over calf-length tube socks. In order to better see the judges, she also swapped her sunglasses for some more sensible spectacles.

Monét’s elderly persona arrived on Drag Race’s main stage straight from the hospital, taking her many sacks of fluids along for the ride. Beneath her hospital gown was a golden two-piece outfit with long, elephant-trunk-shaped breasts swinging pendulously at her waist. The judges admired the humor but thought Monét needed to turn up the glamour factor.

Aquaria’s look this week was that of a fashionable, aging rocker chick, with gray hair, droopy earlobes and platform sneakers. For the judges, this was a rare miss. Michelle Visage and Ross Mathews felt she looked a little too young and didn’t think her look fit the theme particularly well.

Eureka purposely tried to tone down the cartoonish-ness of her runway appearance this week, and it backfired. She sported a purple jumpsuit below a heavy, floor-length trench coat, with a white, shoulder-length wig and large glasses up top. As Ross Mathews said, “She looked like Paula Deen dressed up like a witch.” Eureka didn’t look that bad, but it was nowhere near the jaw-dropping glamour she typically delivers.

Many of the girls adopted crotchety, hunchbacked affectations for their runway walks, but Kameron’s was the best by a mile. She took careful, tiny steps and bobbed her head forward in little jitters that made her wig quiver like leaves on a tree. Halfway through her walk, she swallowed a pill that gave her character a burst of energy, causing her to frantically tap dance the rest of the way. Unfortunately, it wasn’t enough to save her from her mediocre performance in the Breastworld challenge.