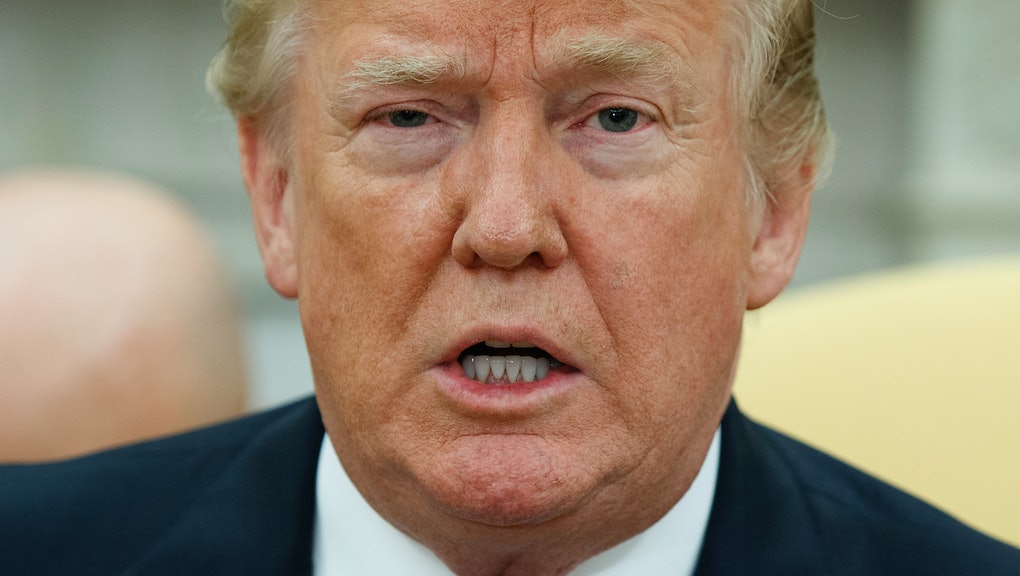 This week in Trump-Russia news: Giuliani continues to stick his foot in his mouth

This week, special counsel Robert Mueller’s investigation hit its one-year mark, and it showed no signs of slowing.

Between new reports of subpoenas, a sealed guilty plea from ex-Trump campaign chairman Paul Manafort’s former son-in-law and new revelations about the infamous Trump Tower meeting, it’s clear that Mueller’s investigation is focused on much more than the public currently knows — and that there’s no sign that the investigation will end anytime soon.

That is enraging President Donald Trump, who sent multiple tweets this week calling the probe a “witch hunt.”

“Congratulations America, we are now into the second year of the greatest Witch Hunt in American History...and there is still No Collusion and No Obstruction,” Trump tweeted on Thursday, the one-year anniversary of Mueller’s investigation. “The only Collusion was that done by Democrats who were unable to win an Election despite the spending of far more money!”

Trump was not alone in calling for the probe to end.

House Speaker Paul Ryan said on Thursday that he’d like to see Mueller’s probe “get wrapped up.”

Here were the big moments from the Trump-Russia investigation this week.

Giuliani made the rounds to media outlets this week trying to defend Trump against an investigation that Trump has said is a “hoax.”

But, as he’s done before, Giuliani just made things worse for Trump in the process.

And on Friday morning, Giuliani sat for a 45-minute interview with CNN’s Chris Cuomo, in which Giuliani got combative when presented with his own comments during the Whitewater investigation into former President Bill Clinton.

During the interview with Cuomo, Giuliani said that Trump cannot be compelled to testify, and added that the only reason Mueller would want Trump to testify would be to trap him into perjuring himself.

But back in 1998 during the Whitewater investigation, Giuliani said that Clinton would have to testify if he received a subpoena.

“If the president is asked to testify, subpoenaed to testify before a grand jury and says ‘No, not gonna do it?’ You gotta do it,” Giuliani said in 1998.

The entire interview — embedded below — has to be seen to be believed.

Trump wants to out an FBI informant

Trump, his GOP allies in Congress and some right-wing cable news hosts are working to expose an FBI informant they claim spied on Trump’s 2016 campaign, the Washington Post reported.

The FBI informant “provided information early in the FBI investigation of connections between Russia and the Trump campaign,” according to the Washington Post’s report.

“Reports are there was indeed at least one FBI representative implanted, for political purposes, into my campaign for president,” Trump tweeted Friday morning. “It took place very early on, and long before the phony Russia Hoax became a ‘hot’ Fake News story. If true — all time biggest political scandal!”

Trump’s assertion is completely unverifiable, which even Giuliani admitted.

“I don’t know for sure, nor does the president, if there really was,” an informant, Giuliani told Cuomo in the CNN interview Friday morning. “We’re told that.”

What we do know, according to a New York Times report, is that a government informant met with former Trump campaign advisers Carter Page and George Papadopoulos multiple times.

Papadopoulos — who pleaded guilty in October to lying to the FBI — is the reason the probe began in the first place, after Papadopoulos drunkenly told an Australian diplomat that he knew Russia had dirt on Hillary Clinton.

The Stormy Daniels payment is official

The revelation came in the personal financial disclosure report — released on Wednesday — that Trump is legally obligated to file.

“In the interest of transparency, while not required to be disclosed as ‘reportable liabilities’ on part eigth, in 2016 expenses were incurred by one of Donald J. Trump’s attorneys, Michael Cohen,” according to page 45 of the disclosure report. “Mr. Cohen sought reimbursement of those expenses and Mr. Trump fully reimbursed Mr. Cohen in 2017. The category of value would be $100,001 to $250,000 and the interest rate would be zero.”

The Office of Government Ethics, which certifies the disclosure for release, also sent a letter to Deputy Attorney General Rod Rosenstein.

In the letter, the OGE sstates that Trump should have reported the reimbursement on his 2017 personal financial disclosure report, but didn’t.

“You may find the disclosure relevant to any inquiry you may be pursuing regarding the president’s prior report that was signed on June 14, 2017,” David J. Apol, acting director of the OGE, wrote in the letter to Rosenstein — who oversees Mueller’s probe.