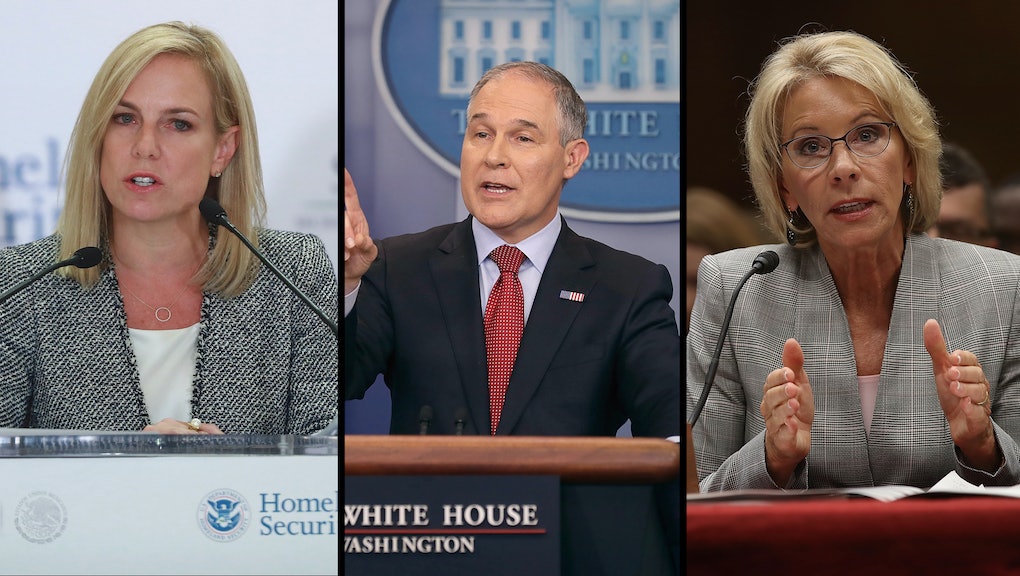 While You Weren’t Looking: 5 stories from the Trump administration that aren’t about Mueller’s probe

May 17 marked the one-year anniversary of special counsel Robert Mueller’s investigation into connections between the Trump campaign and Russia. That meant a torrent of news about both how far the investigation has come, as well as about new developments between the president’s attorneys and Mueller’s team.

While most of the media was speculating about the future of the probe and when it will end, the Trump administration continued to carry out its agenda across various federal agencies, and made some important news in the process.

Here are five big stories you may have missed.

More than four years after the city of Flint, Michigan, had its water supply poisoned with lead — a crisis still affecting the city — there’s a new potential water contamination scandal brewing in the Trump administration.

The Environmental Protection Agency and White House appear to have conspired to withhold the results of a study concerning a nationwide contaminated water crisis due to public relations concerns, according to Politico.

On Tuesday, it was revealed that an assessment of polluted drinking water from the Department of Health and Human Services’ Agency for Toxic Substances and Disease Registry may have been blocked from publication after White House officials raised concerns about the assessment’s political consequences. The assessment, which has still not been published, reportedly found that water supplies near military bases and chemical plants in at least three states — New York, Michigan and West Virginia — posed health risks at far lower levels than were previously called safe.

“The public, media and Congressional reaction to these numbers is going to be huge,” an unidentified White House official said in an email obtained by Politico. “The impact to EPA and [the Defense Department] is going to be extremely painful. We (DoD and EPA) cannot seem to get ATSDR to realize the potential public relations nightmare this is going to be.”

The language of the email suggests that the White House was willing to prioritize public relations over the health and safety of the public.

The Trump administration is preparing a plan to house undocumented children on military bases, separating them from their family and loved ones, according to the Washington Post.

Officials at the Department of Health and Human Services will examine four military bases in Texas and Arkansas to see whether or not those facilities can be used for housing migrant children. Emails obtained by the Post suggest that the assessment is “preliminary,” and that no final decisions have been made on the policy.

The move comes at a time when the president is reportedly growing frustrated with the increasing number of immigrant families entering the country along the U.S.’ southern border.

Reports from inside the White House suggest that Trump has directed his frustration at Homeland Security Secretary Kirstjen Nielsen, who has, in turn, begun drafting plans to criminally prosecute adult parents who enter the country with children.

Such a move would lead to adult immigrants being held in criminal facilities, forcing the DHS to house the children of these immigrants elsewhere. The draft plan for housing immigrant children on military bases appears to be another step toward making that policy a reality.

Education Secretary Betsy DeVos recently visited New York City for a tour of several of the city’s schools, but declined to visit any of the schools in the city’s vast public school system.

Instead, DeVos paid visits to two Orthodox Jewish schools, and met officials at a Catholic charity.

New York City’s Orthodox Yeshiva schools are currently facing scrutiny for failing to provide students with adequate secular educations that give them the knowledge and wherewithal to live and succeed outside the Orthodox community.

DeVos also used the trip to criticize prohibitions on federal funding of religious schools, calling them the “last acceptable prejudice.”

The Education Department is investigating Yale for gender discrimination... against men

Speaking of prejudice in the education system, the Department of Education is investigating Yale University for alleged gender discrimination — against men.

The DOE’s civil rights department has taken up a complaint from a doctoral student against several programs and scholarships offered exclusively to women by the university. The complaint alleges that, because women are no longer underrepresented in Yale’s student body, the programs violate Title IX of the Civil Rights Act, which ensures sex equality in public education.

It should be noted that the doctoral student, Kursat Pegkoz, does not actually attend Yale, and is enrolled at the University of Southern California, about 3,000 miles away.

Pegkoz told Refinery29 that he chose to file the complaint for “no particular reason.”

The Education Department has now apparently decided no particular reason is reason enough to begin looking into seven of the 17 initiatives Pegkoz claims discriminate against men.

On Friday, the Trump administration announced its plan to ban federal funding for any family planning clinic that refers women for abortions. The plan would also remove the federal requirement that those clinics counsel pregnant women that abortion is an option available to them.

The rule change will likely usher more faith-based and other anti-abortion family planning clinics into participate in the federal program. Those groups often did not participate under the old rules because of the requirement to counsel women about their options.

The changes come at a time when anti-abortion groups are putting increased pressure on the Trump administration to carry out their agenda. Earlier in May a group of Republican members of Congress and anti-abortion groups sent a letter to the Department of Health and Human Services demanding the change.

The regulations will still be required to go through a review at the Office of Management and Budget, after which there will be a period for the public to comment on the changes.