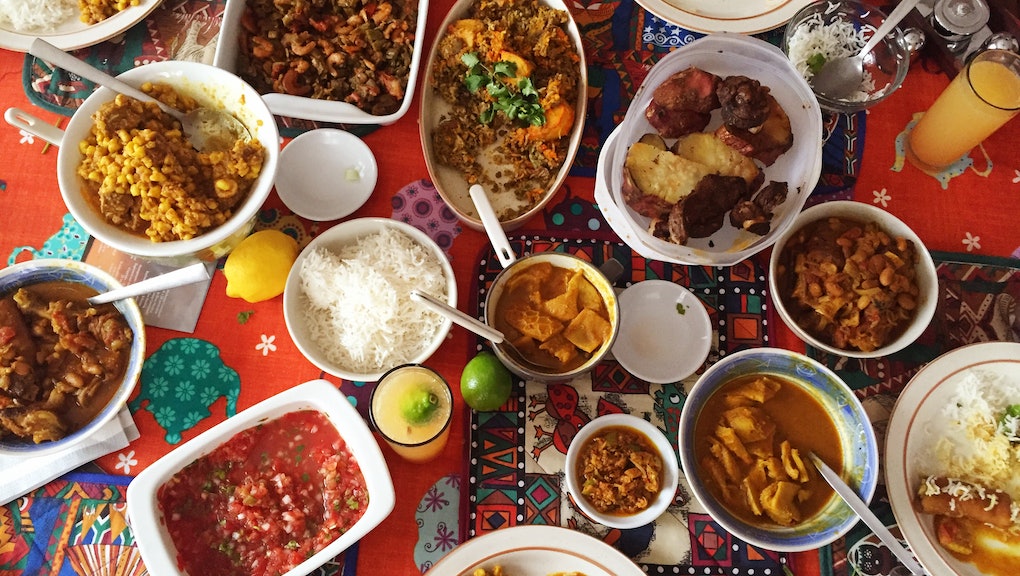 Within the humid port city of Durban and its surrounds on South Africa’s palm-tree-lined east coast, a unique style of Indian cuisine has evolved over the course of 158 years. Locals say you can’t leave before you try one of the Durban curries — smoldering hot mutton curry studded with potato chunks called “gravy soakers”; fiery fish curry spiked with black tamarind and curry leaves; or bunny chow, a hollowed-out quarter-loaf of white bread filled with curry. One popular filling is the finger-staining broad bean curry — the only way to eat it is with your hands.

Zuleikha Mayat and the Women’s Cultural Group labeled Durban curry and rice a “national dish” in 1961 in Indian Delights, an instrumental community collection that was also the first cookbook by Muslim authors in South Africa.

The story of this cuisine commences long before my ancestors, the indentured Indians, arrived in Durban. More than 150,000 Indians — mainly agricultural laborers from lower castes — were sent to the South African port city between 1860 and 1911 at the request of the British. They were destined for the unruly sugar cane plantations, railways, and fishing and boating industries.

With its bounty of staples and spices, Durban Indian food originated, of course, in India, and was entwined with the food available in South Africa, which was cultivated and reared by the indigenous Zulu people.

The rare exception was cattle, as the majority of Hindu arrivals abstained from beef. In Ultimate Curry Bible, author Madhur Jaffrey points out that Durban curry is “a collective spicy cuisine in which regional specifics were replaced by a more general ‘Indianness’.” Over time, a blend of South African cultures helped shape Durban’s culinary identity.

Today, Durban’s 800,000 Indians — descendants of the indentured South Indians and “passenger” (merchant class) Gujaratis who arrived to pursue entrepreneurial interests — form the highest concentration of Indians in a city outside India. They’ve left an indelible print on the country’s cultural and culinary landscapes: Migration and intercultural sharing have been a consistent part of South African history despite successive repressive regimes.

While researching my cookbook Curry: Stories & Recipes across South Africa, a social study examining this singular dish prepared by home cooks in all its forms and across demographics, I attempted to unpack the journey of the indentured laborers and examine their relationship with a foreign land and its produce.

The laborers were promised rations of rice, dholl (yellow split peas), salted fish and oil, according to a legal notice from 1874. But some ingredients, including rice, weren’t always available. And just as masalas and spice blends were adjusted, food was modified based on circumstance. Maize (hominy) was chipped into “rice”; coconuts were scarce and reserved for symbolic ceremonies, not for cooking like in Tamil Nadu, India; cheap vegetable oil replaced ghee, coconut and mustard oils; sour porridge was prepared with locally available maize meal instead of rice.

The Gujarati Hindu and Muslim merchant class, who arrived unbonded and with greater means, opened trading stores to supply the laborers with conveniences from home, including the specialty vegetables and fruit that flourished in the humid, verdant surrounds. Their habitual travels back to villages in India ensured their particular cuisine remained relatively consistent. Indentured laborers were allowed to practice their religions and communal customs, and with this, food rituals associated with prayer and ceremony were preserved. Accordingly, the merchants supplied fresh coconuts, limes, chilies, grinding stones, heavy-based pans and ceremonial goods.

My ancestors were also influenced by their Zulu neighbors over the years. Consider the regional specialties of curried Zulu “running” (free-range, mature) chicken, spicy braised green bananas (which grow there with ease), madumbe (a local yam that replaced potatoes) and amasi (soured milk) raitas.

Later, their descendants (like my grandparents and parents) would prepare adaptations of this food while living in insular, racially segregated communities, splintered by apartheid from 1948 until 1991. My mother calls the frugal meals of this time “specialties”: dried shrimp and luffa, tinned pilchard curry and sheep trotters with speckled sugar (borlotti) beans. There are local versions (accompanied by localized spellings) of breyani, dholl, samoosa, spicy pickles and sweets.

The limited mobility of the indentured Indians, and the fact that South Africa was isolated from the international arena during apartheid, meant the cuisine percolated in the region and developed its own unique and complex traits over time — the fiery red color, the generous use of curry leaves and potatoes that appear even in biryanis, for example. There’s an exuberant use of oil; many refer to the customary oil slick fondly, but no one can say why it exists.

Although the British were fastidious notekeepers, they were superficial participants in their servants’ lives. Since most of the latter were illiterate or couldn’t write in English, there are scant records of the foods prepared. Sometimes, as is the case with colonization, there are skewed views formed and distributed by the oppressors, Durban’s 1860 Heritage Centre spokesman Satish Dhupelia said during a tour of the center.

Because of the Brits’ immaculate shipping records, I was able to determine that my maternal great-grandfather Cuppusamy Moodley, then a scrappy 5-year-old, arrived in Durban in August 1889 aboard the Congella II steam ship from Madras (Chennai). He was accompanied by his 27-year-old mother Parvathi and 1-year-old brother Natasen, from Tamil Nadu’s Chengalpattu district. I imagine Cuppusamy’s curiosity and perhaps fear, traveling in this vessel full of anxious faces, rattled by the ocean winds and storms. Did he annoy Parvathi with childish games, or lift her spirits when the baby cried or food rations were low? Did they stash fragrant seeds, spice mixes and a treasured pot in their trunk?

Imagination aside, I cannot confirm whether my great-grandparents told Bagium, my maternal grandma, about their longing for the rice-based appam, idli and sambar, and sweet payasam of their distant youth. The paper-thin fermented rice-flour dosas, whole-wheat chapattis, the ghee-rich sweets and curd-smothered spiced rice were things that belonged in the past. Bagium, who became a community cook, served a derivative of those memories, what we call “Durban Indian food” today.

Durban Indian cuisine is a result of a desire to thrive and an adaptation to place and circumstance, but it’s nearly impossible to trace the first Durban curry prototype. Shamen Reddi, the 51-year-old restaurateur of Impulse by the Sea in South Africa’s Tinley Manor who found herself in the curry business at age 19, said her curries remain true to that of her forebears: “Durban Indian food’s survival hinges on nostalgia,” she said. Reddi — and the countless Durban Indian cooks I’ve interviewed over the years — take great pride in propagating that nostalgia and are aware of the cultural importance of keeping these ancestral traditions alive.