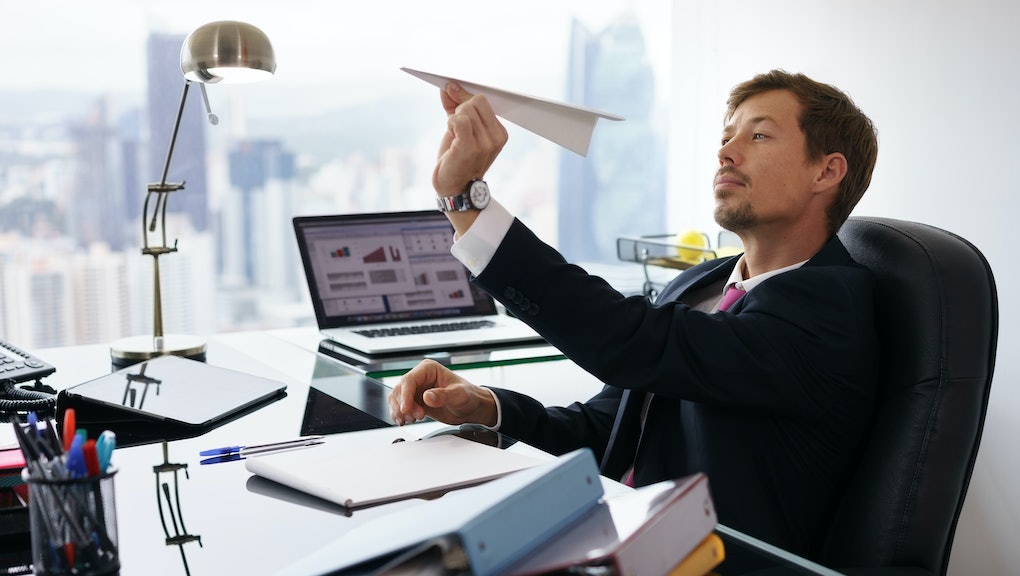 Do you have a bullshit job? Anthropologist David Graeber explains the rise of pointless work

For a culture that valorizes work, we sure do spend a lot of our professional lives running out the clock and wasting time. Despite the long hours, people only spend about 3.6 hours actually working, according to estimates from the Department of Labor. The rest of that time? We’re checking email, sitting in meetings and updating our Facebook pages.

It begs the question: What would happen if we just stopped working? Why fill so much of our time doing nothing at our desks or in jobs that ultimately serve no purpose?

That was the question that the London School of Economics anthropologist and author of Debt: The First 5,000 Years David Graeber tackled in a widely read 2013 essay for Strike! magazine called “On the Phenomenon of Bullshit Jobs: a Work Rant.”

“A world without teachers or dock-workers would soon be in trouble, and even one without science fiction writers or ska musicians would clearly be a lesser place,” Graeber wrote. “It’s not entirely clear how humanity would suffer were all private equity CEOs, lobbyists, PR researchers, actuaries, telemarketers, bailiffs or legal consultants to similarly vanish.”

Graeber’s essay struck a chord. In the United Kingdom, YouGov found that about a third of workers said their jobs made no meaningful contribution to the world. In Holland, a similar survey found an even higher figure, 40%. He expanded on his essay in his new book, Bullshit Jobs: A Theory.

Mic talked to Graeber about why so many of us find ourselves in jobs that ultimately produce nothing for the world, and how we can break the cycle. The following interview has been edited lightly for length and clarity.

Mic: Why do you think the original essay resonated so much?

David Graeber: I have this suspicion it resonated because it was kind of violating this taboo. Here’s something that a lot of people are thinking that nobody’s allowed to talk about, and I directly addressed the fact that these jobs make people miserable.

All these people are suffering and there’s something that was redoubled by the fact that they couldn’t see how they could legitimately complain. They couldn’t justify how they could be so unhappy doing nothing. If you get a job where they pay good money to basically sit around and play Minesweeper all day, you should be delighted! The article gave people a way to think about a situation which everybody knew, and a sort of language to complain about it.

What’s the difference between shit jobs and bullshit jobs?

DG: When you talk about bullshit jobs, people think you mean stupid or bad jobs, and that’s not what I mean. I think it’s jobs that don’t mean anything. Jobs where the person doing them secretly believes that if they didn’t exist the world would be exactly the same or it might be slightly better.

A shit job is not like that. If I’m a cleaner, I know perfectly well that if I’m not there things get dirty. They don’t think they’re useless, they think rightly that they’re not treated very well. There are some, very few, jobs that are both well paid and well respected, mainly doctors.

Does that suggest though that there is intrinsic meaning to work itself? If it’s better to have a shit job with meaning than a bullshit job without it?

DG: One response you get a lot is that if you just have people sitting around all day, they’d be bored and they’d be depressed because there’d be nothing for them to do. Aside from being incredibly patronizing, it’s just not true. There are plenty of societies where people work two or three hours a day and they find things to do. The only reason we can’t do it is because we’re not used to having that free time, and so we don’t have the social networks that come from having free time.

What do you think people would do all day?

DG: Well, first of all, we’d go back to having a local hang out. Most societies have that — a place where people go during the day to be sociable beings. Maybe in the Middle East it’s a tea house, if you’re in France or Spain maybe it’s the cafe. The point isn’t what you do there, it’s the sociability. I made a joke about what people would be doing if they had basic income, they’d be at the cafe arguing about their politics and their much more complex polyamorous love affairs. Because they have more time to make for more interesting gossip.

Why are people who would benefit from this still resistant? Corporate lobbyists, one bullshit job you cite, presumably have access to corridors of power.

DG: The whole impetus is the opposite: Everyone is trying to prove they’re working really hard regardless of whether they’re actually doing anything. There’s this morality that work and suffering justifies your existence. Here in the U.K. you get these stories periodically about just how hard the royal family works. “It’s actually really hard! They hardly get any sleep!”

Where does that come from? Back during the depression, it seemed like half the movies they made were about the idle rich, and how great it was to be one of these guys with a tuxedo arguing about your love life and never doing anything else. And that was considered fine. Now all rich people say they have to work really hard, it’s more, “I’m the CEO and I put in 80-hour weeks and I may be in my corporate jet, but I’m sitting and scribbling and writing really hard the entire time.”

I’m not quite sure how it happened. At some point, work became divorced of productivity and it became an end in itself. And the very perverse result of this is that it’s not just that the more your work helps others, the less you get paid. It’s that people think that’s appropriate!

We just published something about that, about how the more you help people, the more likely you face this notion that you shouldn’t be as paid as much because what you’re doing is noble.

DG: Right! There’s an idea that if you became a teacher or a nurse, you’re self-sacrificing and noble — but if you’re a banker, you’re a selfish bastard, and we can’t expect you to make any sort of sacrifice.

What is the role of capital here? Bankers themselves don’t necessarily run the world, but they come close.

DG: If you said the world wealth creator in 1850, people would assume you meant workers. If you said it now, they’d assume you’d mean capitalists, job-creators, rich people. And the idea is that we need to give more money to rich people so they’ll create jobs.

It used to be, maybe not in 1850 but in 1950, that if you wanted to create jobs, you’d give money to people who are going to buy stuff. So you’d give some money to the working and middle class, and then they’d buy clothing — or if it’s a lot of money, it might be a new swimming pool or car. So the manufacturers hire people to make that stuff.

But if you go to the sort of system that we have now, you say you’re a job-creator and need money to go off and create jobs. But they’re not going to set up a factory because they’ve already kind of got people buying about as much as they can afford. But they also want to create some jobs or else it’ll be hard to scam people into giving them more and more money. So they say, “I’ll hire some more flunkies.”

Bullshit jobs are the jobs you get when there’s this tacit agreement that we’re going to give rich people more money to create jobs, but people can’t afford to buy any of the new things that they’d be manufacturing.

What would be the way to go about fixing this?

DG: We just need to rethink what it is we see as valuable. Something has gone terribly wrong. It’s the rebellion against the labor theory of value. Back in the industrial revolution, it made sense: Workers go in and work, and work produces things and value is based on that productive labor. And factory owners could still say, “Look, we’re making stuff and the idle aristocrats are just parasites.”

But eventually we got rid of the gospel of work and substituted the gospel of wealth. The notion of production actually made this easy, because most production doesn’t create things, it’s fixing things and taking care of things. You make a cup once, but you wash it a thousand times. So it became easier to say it was the factory owner who comes up with the ideas, not the workers themselves. It’s wealth that creates value.

The problem is, if you do that, what is your excuse for making people work all the time? So the new line was to fall back on this kind of religious idea that if you’re not working harder at something, you’re a bad person.

Is this changing? Young people in particular seem pretty anti-capitalist.

DG: I take some small personal credit for that. I think Occupy also really played a role. [Capital] has just taken it to such a ridiculous point, people can’t help but see through it. You’re basically turning people into debt peons and the hypocrisy of the situation is so grave.

We’re told all our lives that the market determines value, but here are all these people saying “I’m being paid $40,000 a year to do something and it’s worthless.” So what is this value of work? My research suggests that it has to do with helping people. People have a sense of value that stands apart from the market, and it really comes from caring for people, caring for other people.

How optimistic are you that this 15-hour work week will actually happen?

DG: There’s a pressing need for it. I always say we’re told that capitalism and market economies are efficient. It might be unpleasant, but it’s efficient. It’s the only efficient system, therefore we need to stick out the unpleasant aspects.

Well, here we have a situation where everyone is panicking because robots are taking our jobs. If there was ever a sign that we live in an economically inefficient system, not only that, but in an economically ridiculous system, it’s the idea that robots taking over unpleasant labor is a problem. Shouldn’t that be great? No one has to work at McDonald’s anymore! Why are we complaining? Because we have such a stupidly set up economic system that we can’t even conceive of the idea of taking the necessary jobs and distributing them in such a way that everyone gets enough to live on.