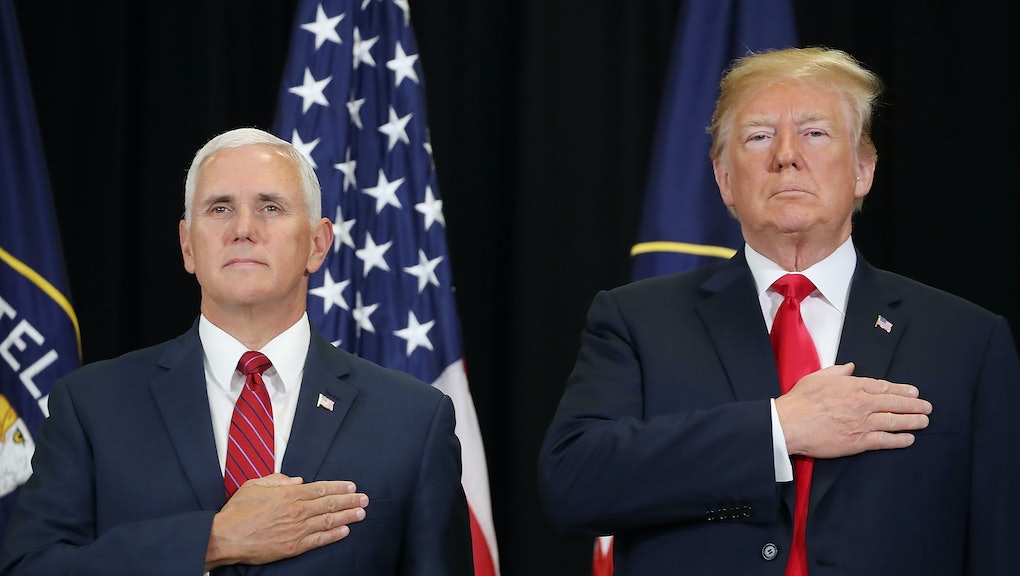 Behind the scenes, Mike Pence’s quiet push to end abortion and limit women’s rights is succeeding

On Tuesday night, President Donald Trump will give the keynote address at the annual gala of the anti-abortion-rights group the Susan B. Anthony List, an opportunity for the president to bolster his credentials with conservative and Evangelical voters and to tout his administration’s most recent promise to them: an end to federal funding for clinics that provide abortions.

But while Trump’s anti-abortion-rights credentials are murky, at best — the former Democrat used to describe himself as “very pro-choice” — the proposed changes to Title X funding are a natural fit and a major achievement for Vice President Mike Pence, who has been adamantly anti-abortion-rights throughout his career.

The new proposal echoes what’s called the “Mexico City policy”, or the “global gag rule,” which was created by former President Ronald Reagan in 1984 and prevented the U.S. from giving foreign health aid to organizations that offer abortions, refer patients to abortion providers, or even counsel patients on abortion.

For Pence, creating a domestic gag rule has been a career goal for years. In 2007, as a member of Congress, he suggested “a Mexico City policy in the United States.”

The rule could devastate Planned Parenthood and other clinics that rely on federal dollars to help cover the cost of patient wellness visits, birth control, support staff and screenings for cancer and sexually transmitted infections.

Meanwhile, the proposed Protect Life rule “would require [U.S.] facilities receiving federal family planning funds to be physically separate from those that perform abortion; would eliminate the requirement that women with unintended pregnancies be counseled on their full range of reproductive options; and would ban abortion referrals,” according to NPR. Planned Parenthood quickly condemned the proposal, saying it was an “attempt to take away women’s basic rights, period.”

It should be noted the Hyde Amendment already prohibits the use of federal funds to pay for most abortions.

That the “domestic gag rule” is now being proposed by the White House serves as confirmation that Pence, though he appears to take a back seat to the president in the public eye, has been quietly exerting political influence within the Trump administration, particularly when it comes to outlawing abortion and limiting women’s rights.

“He’s very much part of this administration,” Toni Van Pelt, president of the National Organization for Women, said in an interview. “He keeps the anti-woman, anti-choice base riled up.”

Pence only rose to the national stage after a long losing streak. He lost congressional races in his home state of Indiana in both 1988 and 1990, during which he used political donations to pay for various personal expenses, including his mortgage. He began discussing political issues on his own radio show in 1992; his stances were anti-establishment and far-right, familiar to us now thanks to the rise of Tea Party rhetoric.

The Mike Pence Show has been described as a tamer version of the kind of conservative talk radio employed by the likes of Rush Limbaugh. But the worldview Pence advocated for hinted at a potential to do far more damage than his louder contemporaries; in one 1997 segment, he attacked Republicans for being too lenient on a female Air Force pilot who was discharged after having an affair with the husband of a subordinate, according to Politico.

Rev. Marie Alford-Harkey, president of the progressive Religious Institute, told Mic that Pence’s worldview isn’t much different from that of other politicians on the religious right. “I just know that his stated goal is to instate that worldview as policy and law,” she said. “It’s one thing to be guided by your views, it’s another to make your religious beliefs law in your country.”

Pence finally got a shot at power in 2000, winning election to the House of Representatives for Indiana’s 2nd District at a time when soon-to-be President George W. Bush brought a certain folksy, Christian persona into the spotlight. Pence won the seat in Indiana’s 6th District in 2002 and remained there until his election as Indiana governor in 2012.

During his 12 years in Congress, Pence became a leader of the anti-abortion movement. In 2002, he claimed condoms were “too modern” and called them a “very, very poor protection against sexually transmitted diseases.” He first introduced a bill to defund Planned Parenthood in 2007 and later sponsored personhood legislation that would have defined life at conception.

Pence called for an end to Roe v. Wade in 2011, saying, “I long for the day that Roe v. Wade is sent to the ash heap of history, when we move past the broken hearts and the broken lives of the past 38 years.” A year later, he co-sponsored controversial legislation that would redefine so-called “legitimate rape” as “forcible.”

As governor of Indiana, Pence began enacting at the state level the same kinds of policies he had sought at the federal level, the most famous of which was the Religious Freedom Restoration Act, a bill he signed into law in 2015 amid national criticism. The bill was promoted as protecting religious freedom, but in practice it allowed businesses to discriminate against LGBTQ customers.

Though the religious freedom bill garnered the most attention, Pence continued to pursue abortion legislation throughout his governorship. He signed every abortion-related bill that crossed his desk including an omnibus bill in 2016 that required the burial of all fetal tissue and expanded the range of illegal abortions. He also prohibited the use of private insurance to cover most abortions and signed a 20-week abortion ban.

Although the damage of such policies might be lessened over time, those reversals do little for the women who have already fallen through the holes Pence cut in the family planning safety net, as NOW’s Van Pelt pointed out.

“Year after year after year he went after abortion providers in the state and pulled all the levers,” Leslie McGorman, the deputy policy director of NARAL Pro-Choice America, said in an interview. “He solidified the anti-choice position of Indiana.”

Pence policies in the Trump administration

Pence delivered his first major address as vice president one week after his inauguration at the annual March for Life in Washington, D.C., where he reaffirmed his commitment to the central tenet of his decades-long political agenda: ending legal abortion.

“We will not grow weary,” he told the crowd of thousands. “We will not rest until we restore a culture of life in America, for ourselves and our posterity. ... Life is winning again in America.”

Pence has been a key figure in negotiating attempts to repeal the Affordable Care Act, his tactics for which have included eliminating coverage for pregnancy and maternity care. He also cast the tie-breaking vote on a Senate bill that gave states permission to withhold federal funds from abortion providers.

“When you look at what women need for autonomy, Mike Pence is going after every single thing,” NARAL’s McGorman said. “Because he’s operated at multiple levels of government, he understands how to do that, which is what makes him so dangerous.”

Pence is surrounded by a team of people who could help implement his vision and who have given the anti-abortion rights movement unprecedented access to power.

The Trump administration has been notable for its reliance on appointees that seem to have either no concrete experience or an outright hostility to the mission of the office they’re charged with leading. Family planning and women’s health care are no exception.

High-level appointees include Valerie Huber as a senior policy adviser overseeing Title X programs at the Department of Health and Human Services and Charmaine Yoest as the department’s head of communications (though she stepped down earlier in 2018). Huber has served as the president and CEO of Ascend, formerly the National Abstinence Education Association, and has been an advocate for abstinence-only sex education. Yoest has been an anti-abortion-rights lobbyist for most of her career and is the former head of Americans United for Life, an anti-abortion-rights organization.

As Pence himself said at a 2017 gala for the Susan B. Anthony List, Trump has “filled this White House and agencies with pro-life leaders.”

The courts have previously worked as a bulwark against the most extreme anti-abortion legislation, including Pence’s own fetal funeral bill. Advocates point out, however, that this could change as the Trump administration continues to nominate judges with conservative viewpoints. Nominees like Wendy Vitter and Amy Coney Barrett have numerous right-wing credentials, including an opposition to abortion rights.

“They’ve created the opportunities for enacting the greatest number of restrictions on birth control, abortion and reproductive health care at large,” McGorman said. “And they have installed people who will carry them out.”

Earlier in 2018, the HHS announced changes to Title X funding that prioritizes faith-based crisis clinics, which have been accused of misleading women about abortion and that emphasize “natural family-planning methods” like abstinence education. These changes allow the Trump administration to funnel money to organizations that provide limited or inaccurate information about family planning and resources for women facing unwanted or high-risk pregnancies — while also taking funding away from organizations that provide services like cancer screenings and mental health services.

Currently being challenged in court by the National Family Planning and Reproductive Health Association and the American Civil Liberties Union, the HHS changes indicate the administration’s dedication to not only limiting access to abortion, but also access to basic information about contraception. This is in addition to efforts to undermine assistance programs like Temporary Assistance for Needy Families (TANF) and Supplemental Nutrition Assistance Program (SNAP) that serve vulnerable families and undoing Obama-era protections for transgender people seeking medical treatment.

“This constellation of things is going to result in bad health outcomes,” Alford-Harkey said, noting that the religious left has been outspoken in its opposition to Pence’s moves to limit rights for women and other marginalized groups. “There is no science behind what they are doing. For religious people and people of faith, this is where our issue is. You are actively harming people by not allowing them to make their own decisions and come to their own conclusions.”

The future of the Trump administration is, of course, unpredictable, and there are a handful of scenarios that could feasibly result in Pence assuming the presidency. He could also challenge Trump in 2020 or choose to wait until 2024 to make his bid.

If his time as vice president has shown Pence’s behind-the-scenes ability to make major policy changes, what more could he achieve as president?

The answer depends on many factors — judicial appointments, congressional majorities, state-level activism. Whether we’d be worse off with Pence as president ignores the reality that we’re already subject to his dangerous worldview regarding women’s rights and family planning.

“He’s really advocating for a theocracy, a country governed by his religious principles,” Alford-Harkey said. “As we continue in this administration, I don’t see it getting any better.”