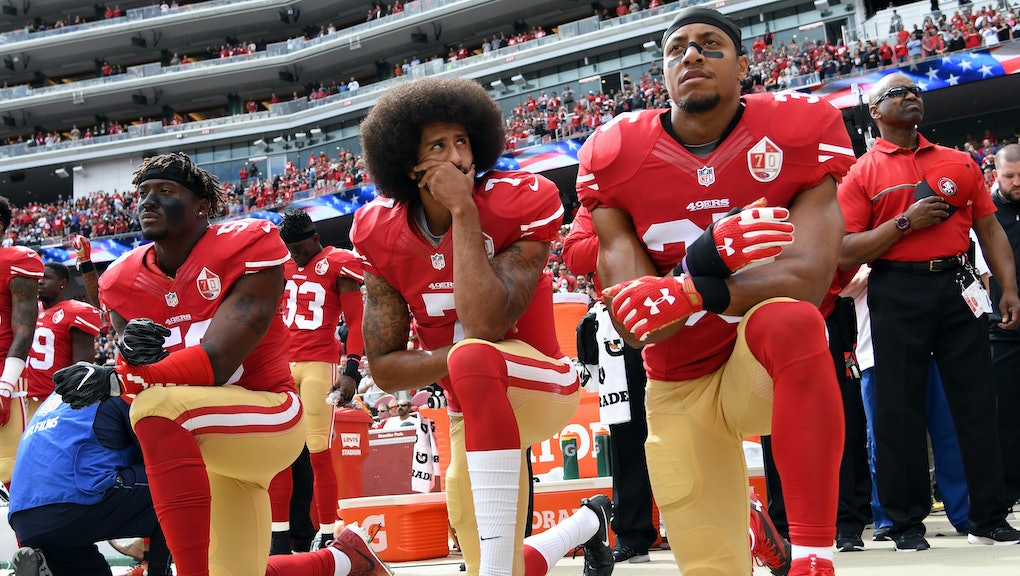 The NFL announced Wednesday a rule to end kneeling as a form of protest during the national anthem. The rule requires players and team personnel to remain standing for the anthem’s duration; if they do not wish to stand, they have to remain in their team’s locker room “or a similar location off the field” until the anthem ends. Teams may be fined if they violate the rule.

“This season, all league and team personnel shall stand and show respect for the flag and the anthem,” NFL commissioner Roger Goodell said in a statement. “Personnel who choose not to stand for the anthem may stay in the locker room until after the anthem has been performed. We believe today’s decision will keep our focus on the game and the extraordinary athletes who play it — and on our fans who enjoy it.”

In October 2016, former NFL quarterback Colin Kaepernick began kneeling during the national anthem as a form of silent protest against endemic, anti-black violence by police, inspiring dozens of other players across the league to do the same. It wasn’t long before detractors, including President Donald Trump, diluted and mischaracterized Kaepernick’s gesture into a debate over protesting the anthem itself. Goodell’s statement echoes this misinterpretation, saying kneeling is disrespectful to “the flag.”

The NFL Players Association released a statement shortly after the rule was announced, saying the NFL did not consult the players’ union in the decision-making process.

“The vote by NFL club CEOs today contradicts the statements made to our player leadership by [Goodell] ... about the principles, values and patriotism of our league,” the NFLPA’s statement said. “Our union will review the new ‘policy’ and challenge any aspect of it that is inconsistent with the collective bargaining agreement.”

NFLPA spokesperson George Atallah elaborated on the statement, according to ESPN.

“If there are changes to the policy that put players in a position where they could be disciplined or fined,” Atallah said, “we are going to do what we always do — fight anything that encroaches on players’ rights to the end.”