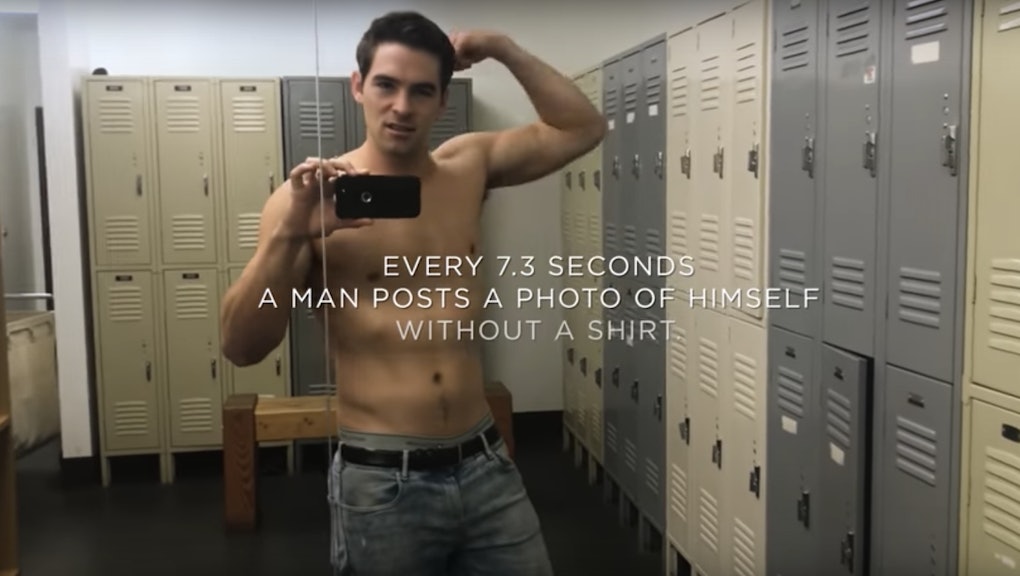 Fruit of the Loom’s latest commercial begins with a harrowing statistic: “Every 7.3 seconds, a man posts a photo of himself without a shirt.”

“A concern that last year alone exposed over 352 million people to a tragic problem,” the narrator continues. “Shirts are falling apart before men can take a picture in them.”

As images of men’s shirtless selfies flash across your screen, the narrator says: “How are these shirts getting so shredded, ripped, cut up? We don’t know.”

And here begins the true core of #PutAShirtOn, Fruit of the Loom’s new genius social campaign:

“We can make a difference by identifying the men living without a quality T-shirt and commenting on shirtless selfies with #PutAShirtOn,” the narrator says. “We can work through this epidemic together.”

The commercial then insists that with something as simple as one of Fruit of the Loom’s new Eversoft tees, which on the campaign’s website is advertised as costing the price of a sandwich, men can defend against more than just odor and moisture, but shirtlessness too.

Won’t you help their cause?

“We couldn’t help but wonder why there are so many guys posting pictures without T-shirts when ours are so readily available,” Bryse Yonts, Fruit of the Loom’s brand communications manager, said in an email. “The real message is that thanks to Fruit of the Loom’s Eversoft tee, there’s no excuse for not having a quality shirt.”

Now, it’s truly rare that an ad campaign from a brand is actually, well, funny. With just the right hint of sarcasm and satire, this ad is absolutely brutal, and we love that.

Twitter is appreciating it greatly too of course, noting that Fruit of the Loom has, in a word, SNAPPED.

“We’re excited to see the reactions and commentary online about the campaign and pretty inspired by how much people care about the welfare of shirtless men,” Yonts said. “We’re hoping to see even more engagement from fans because the more we can replace shirtless selfies with Eversoft tees, the more successful this campaign will be.”

Now of course this campaign has already offended at least one person: a man, who told Fruit of the Loom not to tell him what to do. Which, you know, is fair. But Fruit of the Loom simply fired back: “Our only goal is to help men in want find the quality tee they need.”

Who can really argue with that?