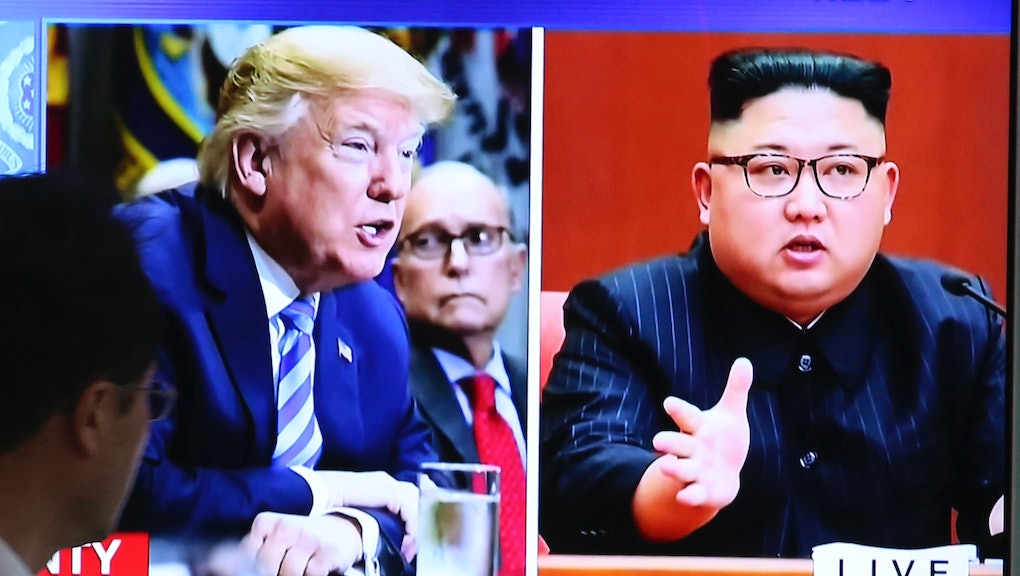 The highly touted meeting between President Donald Trump and North Korean leader Kim Jong Un scheduled for June 12 is no longer happening, after Trump wrote a letter to Kim calling the summit off.

In the letter, Trump blames the cancellation of the meeting on a statement the North Koreans issued calling Vice President Mike Pence “ignorant and stupid.”

“Based on the tremendous anger and open hostility displayed in your most recent statement, I feel it is inappropriate, at this time, to have this long-planned meeting,” Trump wrote in a letter to Kim. “Therefore, please let this letter serve to represent that the Singapore summit, for the good of both parties, but to the detriment of the world, will not take place.”

Trump then went on to issue a threat to Kim.

“You talk about your nuclear capabilities, but ours are so massive and powerful that I pray to God they will never have to be used,” Trump wrote.

Later Thursday morning, Trump made public remarks about his decision to cancel the meeting, calling it a “tremendous setback for North Korea, and indeed, a setback for the world.”

He went on — again — to threaten Kim with war.

“Hopefully, positive things will be taking place with respect to the future of North Korea. But if they don’t, we are more ready than we have ever been before,” Trump said, referencing the U.S. military.

The news comes on the same day North Korea says that it has destroyed its nuclear testing site — which was the key goal for the U.S. in the potential talks. However, given that the North Koreans didn’t let international inspectors in to check the site, it’s unclear whether the site is fully destroyed or still capable of becoming operational in the near future.

Tension surrounding the possible cancellation of the meeting had been building for days, after the North Koreans threatened on May 15 to call off the meeting over joint U.S.-South Korean military exercises. The White House was also concerned that the meeting could lead to “political embarrassment” for Trump, given Kim’s unpredictability and Trump’s refusal to learn the intricacies of the North Korean nuclear program.

South Korean President Moon Jae-in met with Trump on Tuesday to try to salvage the summit, but was ultimately unsuccessful.

With the summit now called off, Republican members of Congress who nominated Trump for the Nobel Peace Prize for his effort to denuclearize North Korea now have egg on their face. And the White House similarly faces embarrassment over prematurely minting commemorative coins for the summit that feature images of Trump and Kim.