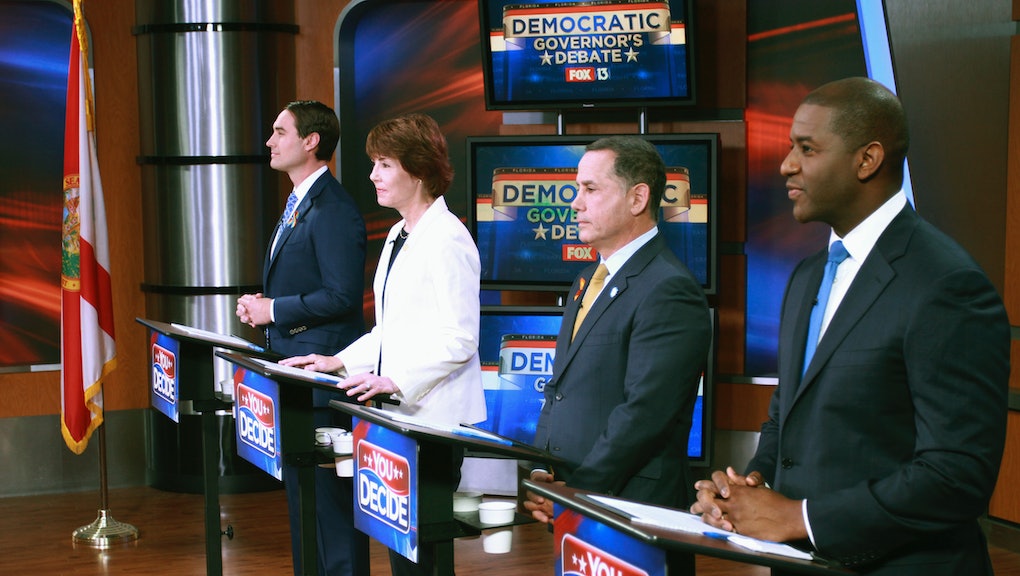 As Democrats prepare to mount an effort to reclaim control of government from Republicans at all levels in 2018, one of their most important races is heating up: the race to be the next governor of Florida.

Primary races on both the Republican and Democratic sides show razor-thin margins between top contenders, and polling between prospective candidates for the general election shows equally slim margins. The tight race illustrates just how important control of the state is to both national political parties in 2018.

Since the state’s last gubernatorial election, Florida has grown to become the nation’s third largest state in terms of population, and remains one of the nation’s fastest growing states.

That growth makes Florida key for both Democrats and Republicans trying to gain control of important swaths of the electoral map ahead of the all-important 2020 census. Whichever party controls the Florida government will have major sway over how the increasingly influential state’s congressional districts will be drawn, as well as what kind of voting rights protections will be in place across America’s largest swing state ahead of the 2020 presidential election.

Yet Florida’s rapidly growing population, combined with eight years of total Republican control of state government, has also left the state with one major crisis that could be the key to Democratic victory in November: Florida has yet to expand Medicaid under the Affordable Care Act and has one of the largest uninsured populations in the country.

Currently, nearly one in every six Americans who falls into the so-called “coverage gap” — the gap between qualifying for traditional Medicaid and qualifying for subsidized health insurance on the ACA exchanges — lives in Florida.

Estimates from the Urban Institute show that expanding Medicaid in Florida alone could result in as many as 900,000 people gaining health insurance coverage.

Over the past five years Republicans in Florida’s state government have toyed with the idea of expanding Medicaid, but have consistently allowed those efforts to be held up by conservative dogma and kibitzing over spending on vulnerable populations. Their inability to come to an agreement about expansion has left hundreds of thousands uninsured.

It has also created a major political opportunity for Democrats.

A new analysis by the group Data for Progress shows that Medicaid expansion enjoys remarkably high support in every single state level house and Senate district, with average support across the state around 65%.

“These numbers show what we’ve long suspected: there is a powerful electoral mandate for Medicaid expansion. Democrats need to stand firm on the issue, and Republicans who defy their voters should be prepared to be replaced,” said Sean McElwee, one of DFP’s co-founders.

At this point in the primary, health care policy has already begun to play a role. All four of the top candidates in the Democratic gubernatorial primary — former U.S. Rep. Gwen Graham, Tallahassee Mayor Andrew Gillum, Miami Beach Mayor Philip Levine, and businessman Chris King — have each voiced support in one way or another for expanding health care coverage to more Floridians. And while there is some daylight between the candidates on support for a national single-payer health care system, the candidates have directed most of their animus toward Republicans who refuse to expand Medicaid.

The high level of support for Medicaid across state level districts suggests that running on a platform to expand Medicaid could not only be the key for Democrats hoping to win the hotly contested race for governor, but also to winning back control of both state legislative houses for the first time since 1992.

“Its certainly more popular than the Florida legislature is at the moment,” he said. “None of our survey data could provide a single example of a Florida legislator whose popularity would be harmed by talking more about Medicaid expansion.”

In 2018, half of Florida’s 40 state senate seats will be up for re-election, along with all 120 Florida state house seats. Democrats currently need to win back 5 senate seats and another 21 house seats in order to win control of the state legislature. With majority favorable ratings in every state district, Democrats could run a statewide campaign on Medicaid expansion that would benefit candidates in every district.

That election was considered a landslide for Democrats who won the governor’s race by a comfortable nine percentage points, while also making major gains in both branches of the state legislature. Multiple exit polls from that race showed that a plurality of voters listed health care as the top concern when voting in the election.

What’s more, Medicaid also appears to be popular among parts of the Democratic base that experts see as crucial to the party’s future in the swing state.

“We find evidence that Medicaid expansion is popular across demographic groups, with strong majorities among voters who are Black, Latino, female, or are of low-income status,” Ray said.

In 2016, decreases in voter turnout among Black and Hispanic Floridians helped Donald Trump carry the state that a more diverse electorate had handed to Barack Obama just four years earlier. Prioritizing issues like Medicaid expansion could have the effect of increasing voter turnout among those communities, especially as evidence shows that giving more people access to health care tends to have long-term effects on voter turnout.

With Democratic hopes high for the 2018 midterms and beyond, there is already considerable debate over what sort of issues Democrats should be raising on the campaign trail. But whatever national strategy the Democratic party settles on, it is clear that in states where Medicaid expansion is still an issue, voters are more enthusiastic and motivated than ever before to expand health care coverage in their respective states.