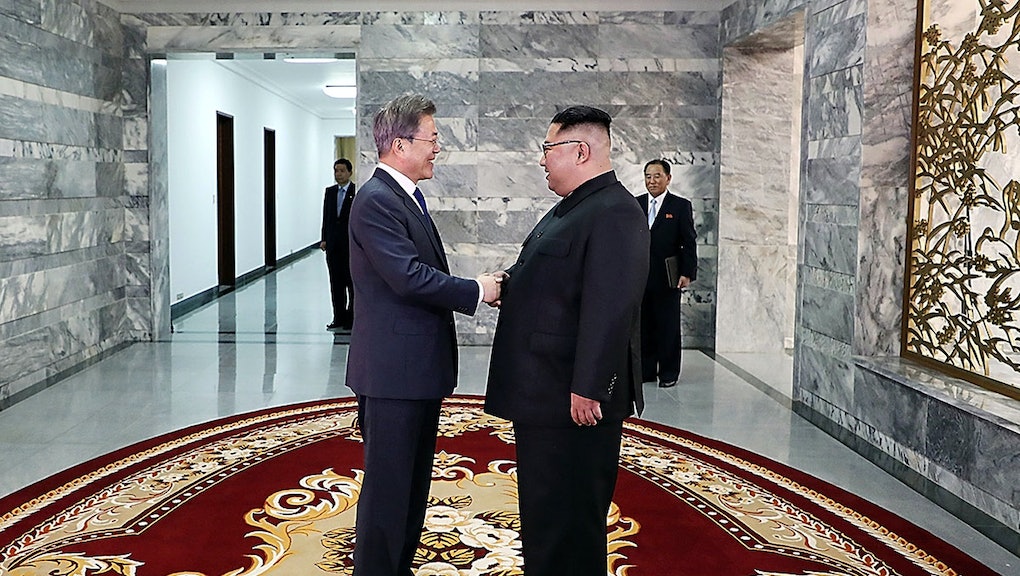 South Korean President Moon Jae In on Saturday met with Kim Jong Un in North Korea, apparently in an attempt to salvage the June 12 summit with the United States that President Donald Trump abruptly canceled earlier in the week.

It was the second time in a month the leaders of the two Koreas met, this time just north of the demilitarized zone separating the countries.

“The two heads of state had a frank exchange of views on the implementation of the April 27 summit agreement and for the successful holding of the North Korea-United States summit,” Yoon Young-chan, a spokesperson for Moon, said in a statement Saturday, according to the New York Times.

The unexpected meeting came days after Trump called off his planned summit with Kim in Singapore next month over the “tremendous anger and open hostility” the Kim regime displayed in recent statements about the possibility of war with the U.S. — and about Vice President Mike Pence.

“The world, and North Korea in particular, has lost a great opportunity for lasting peace and great prosperity and wealth,” Trump wrote in a letter to Kim Thursday. “This missed opportunity is a truly sad moment in history.”

The Singapore summit had been much-anticipated since March, when Trump announced that he planned to meet with Kim following a 2017 that saw the two leaders trading personal insults and nuclear threats with one another.

But the delicate diplomacy had appeared to be in jeopardy in recent days after North Korea threatened to pull out of the meeting over joint military exercises by the U.S. and South Korea in the region — and over comments by John Bolton, Trump’s national security adviser, suggesting the administration may be seeking regime change.

Bolton had suggested in April that the U.S. could follow the “Libya model of 2003, 2004,” in which Libyan leader Muammar Gaddafi abandoned his nuclear program in exchange for sanctions relief before being killed in 2011 during a U.S.-backed uprising.

Vice President Mike Pence made similar remarks in a Fox News interview earlier this week, suggesting North Korean leadership could end up like Gaddafi if the country does not denuclearize. North Korea responded Thursday by calling Pence’s remarks “ignorant and stupid.”

Trump called off the meeting Thursday, but has continued to suggest that the meeting could still occur later — or even on June 12, as had been originally planned.

Trump appeared to have taken South Korea by surprise when he canceled the meeting Thursday; Moon convened a late night emergency meeting with the country’s leadership to “figure out what President Trump’s intention is and the exact meaning of it,” a spokesperson for the South Korean president told reporters.

Moon, whose diplomatic outreach to Kim throughout 2018 paved the way for the potential meeting between the U.S. and North Korea, held his own historic meeting with the North Korean leader on April 27.

The two discussed plans to negotiate an official end to the Korean War and, Kim promised in his first address to the world, to establish a “permanent peace” on the peninsula.