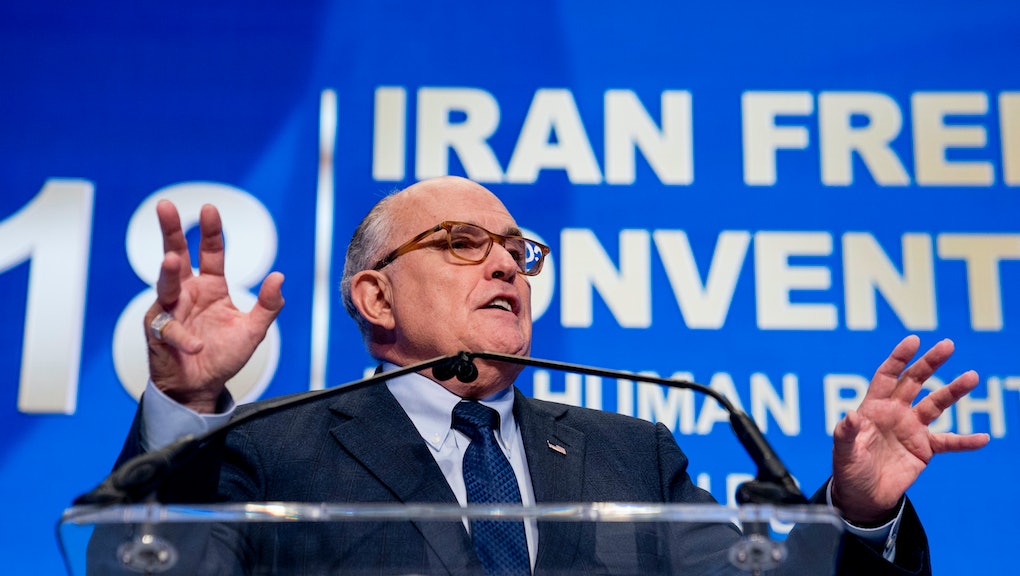 Trump attorney and former New York mayor Rudy Giuliani appeared on CNN’s State of the Union Sunday to discuss the ongoing status of Robert Mueller’s investigation into the Trump campaign and Russia — and admitted that when it comes to obstruction of justice, he was worried about where Mueller’s team could be headed.

Giuliani, who has been tasked with negotiations ahead of any potential interview between Trump and the Mueller investigation, said Sunday that an interview was still “contingent on every point being worked out.” If an interview is to take place, however, the lawyer suggested Mueller’s team “would probably limit it” to two key topics: potential collusion with Russia and obstruction of justice.

“The collusion part we’re pretty comfortable with, because there has been [no collusion] — the obstruction part I’m not as comfortable with,” Giuliani said Sunday. “I’m not, the president’s fine. He’s innocent.”

“I’m not comfortable because it’s a matter of interpretation,” Giuliani continued, explaining, “If you interpret Trump’s comment about ... firing [former FBI director James] Comey as obstructing the investigation, as opposed to firing a guy who was doing a bad job on the recommendation, in part, of [Deputy Attorney General Rod] Rosenstein, but you see it as obstructing the investigation, then you can say it’s obstruction.”

Giuliani then went on to say that this matter of interpretation could also extend to accusing the president of perjury, adding that such a charge would be “even easier for them.”

“Which is where I think, if they’re sneaky, they’re going,” Giuliani speculated about Mueller’s team.

Mueller is reportedly focusing on Trump’s May 2017 firing of Comey as part of an investigation into whether the president has obstructed justice. The president has given conflicting reasons behind his consequential decision; Trump said in Comey’s resignation letter that the FBI director was “not able to effectively lead the Bureau” and that his decision was based on the recommendation of Rosenstein and U.S. Attorney General Jeff Sessions. In April, Trump tweeted that Comey “was not fired because of the phony Russia investigation.”

Other comments, however, suggest that Trump’s decision could have been motivated by the FBI’s inquiry into the Trump campaign’s Russian ties, sparking potential charges of obstruction. In an interview on NBC News following Comey’s firing, Trump told Lester Holt: “Regardless of [Rosenstein’s] recommendation, I was going to fire Comey.”

“And in fact when I decided to just do it, I said to myself, I said, ‘You know, this Russia thing with Trump and Russia is a made-up story, it’s an excuse by the Democrats for having lost an election that they should have won,’” Trump said.

In an Oval Office meeting with Russian officials immediately after Comey’s firing, Trump also reportedly called Comey a “nut job” and said of his termination: “I faced great pressure because of Russia. That’s taken off.”

An October 2017 report from the Brookings Institute concluded that Trump “likely” committed obstruction of justice when he fired Comey, citing his comments both before and after Comey’s firing. In addition to Comey’s termination, Mueller’s investigation into Trump’s potential obstruction of justice is also reportedly focused on Trump’s firing of former national security adviser Michael Flynn, along with his role in drafting a misleading statement about his son’s 2016 meeting with a Russian lawyer and Trump’s reported consideration of firing Mueller himself in June 2017.

The Trump administration, however, has long maintained that the Mueller probe is no more than a “witch hunt.” On Sunday, Trump fired off two tweets that decried the Mueller probe as a “rigged investigation” and complained about “the young and beautiful lives (and others) that have been devastated and destroyed by the phony Russia Collusion Witch Hunt,” although it was unclear whose lives the tweet was in reference to.

Giuliani echoed these claims Sunday, calling the investigation “rigged” and saying it would yield no evidence of collusion regarding the president or his closest advisers.

“Nobody talked about Russians, nobody knew about Russians,” Giuliani said about his experience working on the Trump campaign. “This came as a surprise to me, to the president, and to the top four or five people around him.”

The lawyer noted, however, that the administration’s constant public attacks on the Mueller probe are at least somewhat strategic. When asked by host Dana Bash whether his and Trump’s attacks on Mueller were a way to discredit the investigation and sour public opinion against Mueller, Giuliani admitted that Trump’s team did have the American public in mind — particularly when it comes to any future impeachment proceedings against Trump.

“Of course we have to do it, in defending the president,” Giuliani said Sunday. “It is for public opinion, because eventually, the decision here is gonna be, impeach or not impeach. Members of Congress, Democrat or Republican, are going to be informed a lot by their constituents. So our jury is the American people.”