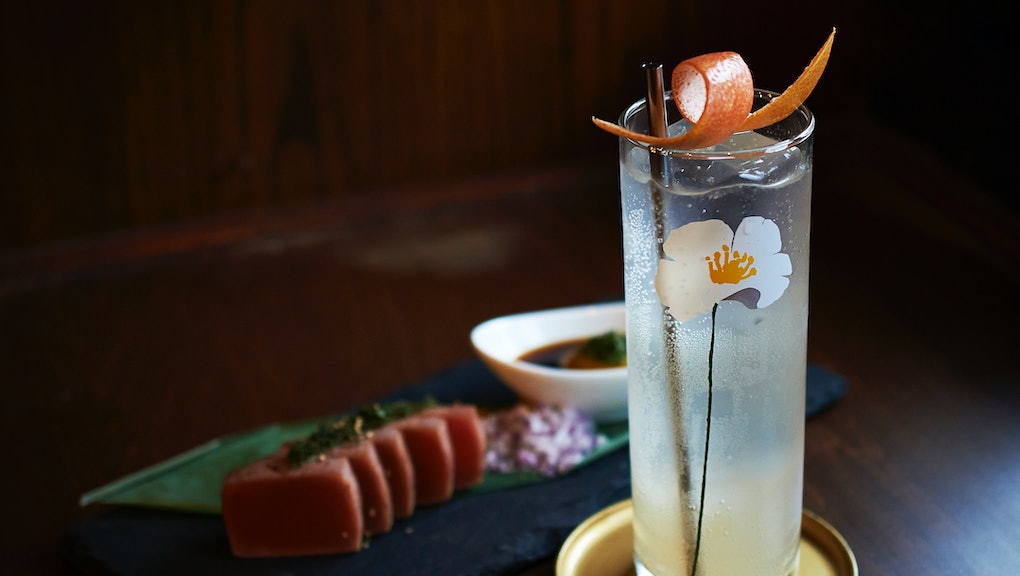 The little-known history of the Japanese highball cocktail

The highball drink — essentially a cocktail that contains more mixer than alcohol — first gained popularity in Japan over 60 years ago. That was when Shinjiro Torii, founder of Suntory, opened a chain of bars called Torys and featured whisky highballs — one part whisky for every three to four parts soda — on the menu.

Historically, highballs have been around as long as soda and spirits have existed. “However, in Japan, highballs date back to the 1920s, when Japanese whisky really began to grow in popularity,” Frank Cisneros, consulting beverage director at Bar Moga in New York, said.

Over the years, the highball lost some of its luster and was considered outdated. It didn’t help that whisky itself was going out of fashion in Japan in the ’90s, in favor of beer and other spirits. But this is a story of perseverance.

The highball wasn’t invented in Japan — a complicated history and an early mention in an American cocktail guide in 1900 suggests that someone, somewhere in the U.S. first concocted the beverage. But the Japanese have adopted the highball and made it their own, so much so that it’s often referred to as a Japanese highball.

“I believe most of the modern popularity surrounding highballs comes from the promotions and advertisement for Suntory Toki whisky,” Adam Stearns, bartender at Terranea Resort in Rancho Palos Verdes, California, said. The company has opened highball bars and designed a highball machine to guarantee perfect highballs every time straight from a tap. Gardner Dunn, Suntory Whisky Brand Ambassador for Beam Suntory, said the machines are now ubiquitous, with thousands in Japan.

The origin story of the highball

The highball has a bit of a confusing backstory. The recipe first appeared in the U.S. as early as 1895 in The Mixicologist by Chris Lawlor, though in this instance it was called the “Splificator,” and the name was used in the 1900 version of Harry Johnson’s Bartenders’ Manual.

Nearly 30 years later, a man by the name of Patrick Gavin Duffy claimed responsibility for bringing the highball to America. In October 1927, Duffy wrote to the New York Times claiming that the Adams House in Boston served the first Scotch highball in the U.S. But his evidence is iffy.

“Rumor has is that in 1894 an English actor by the name of E.J. Ratcliffe came into Duffy’s establishment requesting Scotch and soda and at the time Duffy did not carry the items requested,” Chris Caldwell, industry veteran and beverage manager at La Cantera Resort & Spa in San Antonio explained. Further complicating its origins, Duffy later wrote a book claiming that the drink originated at another bar altogether. But, since nobody else has ever made a claim to its invention, the drink is usually attributed to Duffy.

As for the highball’s name? “The highball is an old railroad term for the ball connected to a float inside a steam train’s water tank that indicated that there was a enough water for the train to move off,” Caldwell explained. When the conductor was ready he would give two short and one long blast. “These blasts are the spirit of the cocktail — two shots of spirit and one long pour of club soda,” Caldwell said.

The popularity of the highball in Japan is undeniable. Visit any izakaya (a Japanese gastropub) and you’ll see people enjoying the drink after a long day of work with friends and coworkers.

But they can also be found at more formal cocktail bars where bartenders take care to add each ingredient carefully, stir the ice to chill the whisky 13 ½ times to the left and then add soda water down the arm of the spoon, being careful not to burst the bubbles, according to Dunn.

You might wonder what makes a Japanese whisky highball different than a whisky soda. “The highball uses a soda water with a higher carbonation level than the average soda, higher quality ice with no bubbles or minerals, and is more refreshing in flavor profile,” Dunn said. The highball is also presented in a tall glass or mug instead of a whisky soda rocks glass.

The quality of the ice is important, too. “Ice serves not just an aesthetic purpose but also a functional one,” Dunn said. According to the expert, the ice should be sweated — regular ice is jagged and will destroy the carbonation and clear. High-density, oxygen-free, glassy surface area ice allows it to melt more slowly and slow the dilution process.

It might seem like a simple cocktail, but the highball emphasizes the complexity of the whisky. The better the whisky, the better the highball. “Soda gun or sparkling mineral water is not recommended due to their relatively low carbonation levels,” Dunn said.

Highballs come back to America

Suntory and other Japanese brands have worked hard to bring back the highball to the U.S. “The way it looks to me, once their prestigious aged whiskies hit big — Hibiki and the Yamazaki and Hakushu Single Malts — the world needed Japanese whisky, so much so that the distilleries couldn’t supply enough to meet demand,” Jeremy Allen, bartender at MiniBar Hollywood, said. “Suntory’s new blend, Toki, was sold as a Japanese whisky ‘created exclusively for the highball.’”

In recent years, an increasing number of bartenders in the U.S. have added highballs to their cocktail menus. “They don’t often veer away from the two significant ingredients — Japanese whisky and soda water,” Dunn said. Common additions have included grapefruit peels or essence, shiso leaves and a simple lemon squeeze. “We have seen many play with the garnishes to play up a certain flavor or give it a twist,” Dunn said. Sometimes it takes just one small tweak to a two-ingredient cocktail to appreciate the beauty of something so simple.