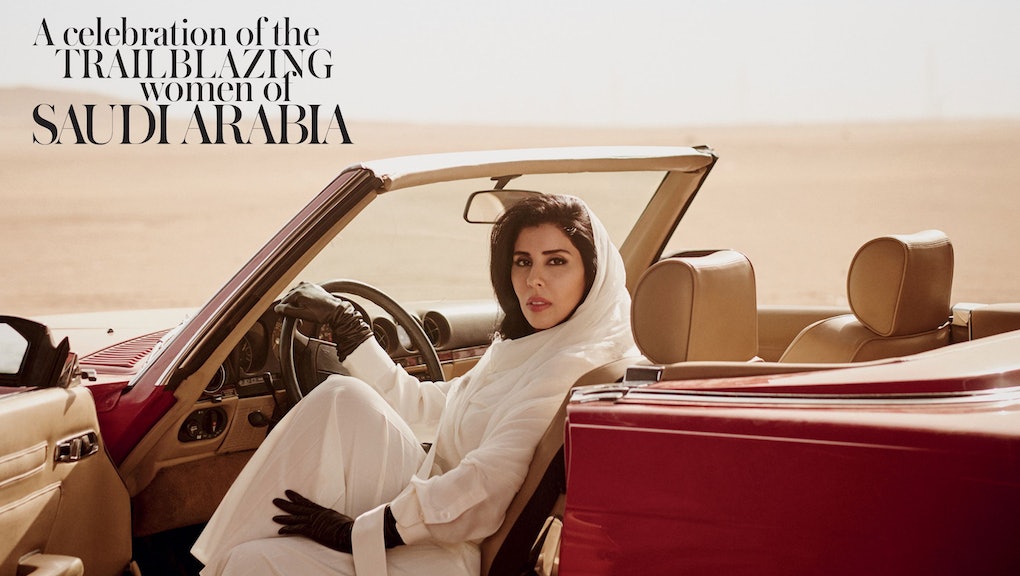 At first glance, Vogue Arabia’s June cover is nothing out of the ordinary for a fashion magazine. A glamorous woman — a princess, in fact — poses in the driver’s seat of a sports car parked in the desert.

Draped in white, with a scarf covering her head and black driving gloves, it’s all Grace Kelly meets 2018. Dig a little deeper though, and it’s not just a model posing in the car for this Vogue Arabia cover. It’s a political statement.

According to the magazine, the cover is a celebration of the end of the ban on women driving in Saudi Arabia.

“HRH Princess Hayfa bint Abdullah Al Saud is in the driving seat on the cover of Vogue Arabia’s first-ever Saudi issue,” Vogue Arabia wrote on Instagram. “The Saudi issue will launch in a monumental month, with the ban on women driving in the kingdom set to be lifted on June 24.”

The issue is all about groundbreaking women, with a new era in Saudi Arabia on the horizon.

While the princess on the cover is actually the daughter of a former king, whose own family had enforced the driving ban, as noted in the interview, she’s now on the side supporting this change. “In our country, there are some conservatives who fear change,” she told Vogue Arabia. For many, it’s all they have known. Personally, I support these changes with great enthusiasm.”

But that’s not really the problem people have. It’s that the princess is on the cover of a Vogue issue, glamorously behind the wheel promoting equality, while multiple women have been jailed in her country for doing exactly the same thing within just the past two weeks.

People have gone so far as to replace the face of the princess on the cover with that of one of the many activists.

In an emailed statement to Mic, Vogue Arabia editor-in-chief Manuel Arnaut said,“Each month, Vogue Arabia highlights and discusses key issues related to womanhood in the Arab world. Fashion might be part of our core business, but informing and initiating heathy debates around meaningful topics are also a priority under my editorship. Naturally, we could not ignore the current affairs, especially when they are related to Arab women in one of the markets in the region where Vogue Arabia is especially relevant.”