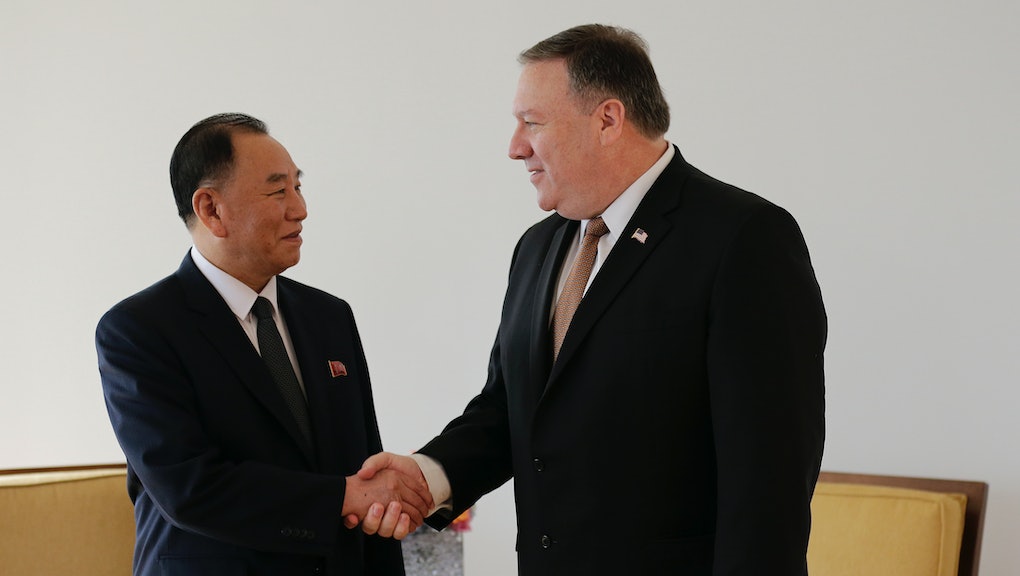 As part of the on-again, off-again summit between President Donald Trump and North Korean leader Kim Jong Un scheduled for June 12, U.S. Secretary of State Mike Pompeo met with a high-ranking North Korean official Wednesday night in New York — the very same general from the country’s regime who was sanctioned by the U.S. over the 2014 cyberattack on Sony Pictures.

Meetings regarding the strained would-be summit have been “very good,” Trump said Thursday, adding that Pompeo and North Korean General Kim Yong Chol are now expected to visit Washington, D.C., on Friday to deliver a letter to him from Kim Jong Un.

Trump’s comments came as Pompeo had another day of meetings in New York City with Kim Yong Chol, the North Korean vice chairman of the central committee of the ruling Workers’ Party, and a delegation from Pyongyang ahead of the potential summit in Singapore. Despite Trump calling off that meeting with Kim Jong Un a week earlier, officials in the United States, South Korea and North Korea have been scrambling in recent days to salvage the summit.

Pompeo had a working dinner of “steak, corn and cheese” with the four-star general Wednesday in New York as part of those ongoing negotiations. It’s unclear what the two discussed specifically, but there have been some indications the two sides may be far apart on the issue of denuclearization.

The Trump administration has pushed for “complete, verifiable, irreversible dismantlement” of North Korea’s nuclear program. But Trump himself has appeared to relent somewhat in recent days on the timetable for denuclearization, suggesting he would be open to North Korea denuclearizing in phases.

The Kim regime is not expected to give up its nukes, according to U.S. intelligence.

Determining what kind of deal Pyongyang would be willing to make is likely a subject of Pompeo’s talks this week, and could be a determining factor in whether the summit goes forward.

Who is Kim Yong Chol?

Kim Yong Chol, a top aide to the North Korean leader, is a major player in the North Korean government and considered a tough negotiator. As a former intelligence official in the regime, he’s been at the center of two significant confrontations with the U.S. and South Korea.

Seoul accused him of being behind the 2010 sinking of a South Korean navy ship, which killed 46 people. The U.S. also said the North Korean intelligence service Kim oversaw was behind the 2014 Sony hack, which was seen as retaliation for the studio’s comedy, The Interview, about tabloid journalists played by James Franco and Seth Rogan landing an interview with Kim Jong Un.

In a 2015 speech, then-director of national intelligence James Clapper recounted a dinner he’d had with Kim Yong Chol and described him as hostile toward the U.S.

“General Kim spent most of the meal berating me about American aggression and what terrible people we were,” Clapper said, according to his office at the time. “He said that North Korea was under siege by its closest neighbors, who were supported, aided and abetted by the United States. He got louder and louder, and he kept leaning toward me, pointing his finger at my chest and saying that U.S. and South Korean exercises were a provocation to war.

“He really is illustrative of the people we’re dealing with in the cyber realm in North Korea.”

Kim was also known as the “toughest” North Korean negotiators in nuclear talks that broke down in 1992, according to the New York Times.

It’s still unclear what will come out of his meetings with Pompeo this week — and if the summit will ultimately occur. But Trump and the White House have seemed to suggest they hope it will take place as scheduled — despite his abrupt cancellation.

“The conversation is going to be focused on denuclearization of the peninsula,” White House press secretary Sarah Huckabee Sanders said Wednesday in her daily briefing. “That’s what these ongoing conversations taking place now will be centered on, as well as the summit that would take place in Singapore. And we’re going to continue — as long as that is part of the discussion, we’re going to continue to shoot for the June 12th and expect to do that.”