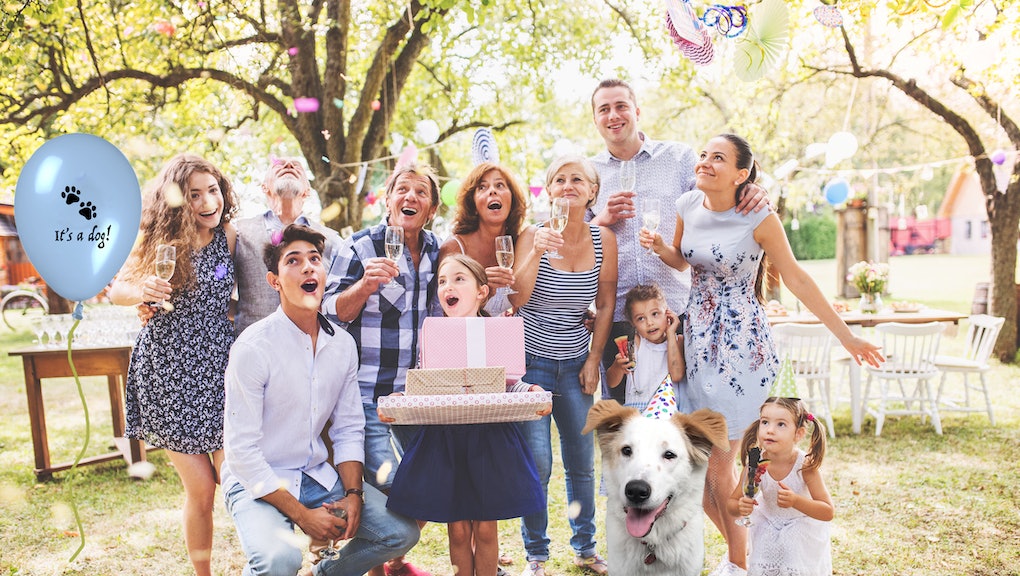 Fifteen of us gathered around a projector for the big reveal. Sandra Thomas, the mom, had asked us all to place bets beforehand. There was money on the line: We’d each put in $10 along with our guesses, and the winner would take home $150. With bated breath and growing excitement, we watched as the test results were unveiled.

The baby is… a husky! But he’s also a boxer, an American Eskimo dog, a rottweiler and a number of other unidentified breeds.

This wasn’t a gender reveal party — it was a breed reveal party. And Thomas’ 23-pound, 1-year-old baby, Pete, was a real shocking combination of dogs.

Months ago, Thomas had ordered a dog DNA test from a company called Wisdom Panel. For $84.99, the company sends you a kit to determine your dog’s breed; you swab your pup’s mouth and send it in. Wisdom Panel compares your dog’s DNA to its database of dog breed DNA signatures. A few weeks later, you’ll receive a breakdown of your dog’s breed, going back to its eight great-grandparents.

I guessed the following: German shepherd, border collie, Jack Russell terrier, Labrador retriever, foxhound, Australian shepherd, beagle and coonhound. I got zero correct. In the end, three people were tied with three correct guesses each. They split the $150.

My guesses, while inaccurate, weren’t made haphazardly. I’d spent the week before Pete’s party researching. I scrolled through the American Kennel Club’s website in my bed, taking particular stock of the hounds and herding dogs. I knew that Pete had been labeled a shepherd/collie mix by the shelter, and that didn’t seem far off. He’s 23 pounds, with short tan fur, a long nose and pointy ears that fold forward. I’d always suspected that he was at least part Jack Russell terrier; he has that kind of face.

The idea to gamify the reveal came from Thomas’ friend Jack Pollock. This wasn’t his first breed reveal; he’d organized another one for his girlfriend’s dog in March. Inspired by March Madness, he asked Thomas’ attendees to fill out a bracket beforehand, and we each chose eight dog breeds we thought Pete might be. When Pollock revealed the breeds via PowerPoint, all hell broke loose.

The cursing was immediate. “What the fuck?!” someone shrieked. “That’s psycho!” How could it be possible? More screaming. “This is fake news!” someone shouted. “This is false,” someone else yelled. “Are you sure Pete’s saliva was the only saliva on the swab?” someone asked. In the end, it was much more surprising than a traditional gender reveal.

Pollock has now organized two breed reveal parties, but has yet to encounter anyone else who’s thrown one. His girlfriend, Kristin Briggs, is part of a private Facebook group for people who adopted from Badass Brooklyn Animal Rescue, and she said people occasionally post their Wisdom Panel results there. She’d never heard of anyone throwing a breed reveal party until Pollock came up with the idea.

Pollock called the concept “a spoof on the gender reveal party,” a concept that these party throwers are trying to upend. According to a study from GLAAD, around 12% of millennials identify as trans or gender nonconforming, and the idea of gender as a spectrum has been gaining steam among young people for years. “I will go on rants about gender reveals,” Briggs said. Gender reveals have fallen out of favor in recent years, and some new parents have started raising their children without gender.

The Wisdom Panel test also offers a fun way for people to get involved in the DNA test craze without giving any of their own medical information away. Companies like 23andMe have come under scrutiny for selling people’s genetic data. That data is anonymized, but it’s not too hard to figure out whose DNA is whose. Genetic information collected by these companies has even been handed over to law enforcement to solve crimes. But who cares if your puppy’s data is out in the world? “It’s fun to do one for your pet knowing the data is meaningless as a consumer,” Thomas said.

Briggs’s dog, Arya, turned out to be mostly treeing walker coonhound, and part golden retriever. Wisdom Panel even went as far as to specify that one of her great-grandparents may have been a U.S. show dog. “I think it answered a lot of unanswered questions around some of her funny behaviors and habits,” Briggs said. Arya loves to stand on her hind legs, for example, and Briggs discovered this was a classic “treeing” behavior.

“It was sort of vindicating for me that she had this interesting history,” Briggs said. She adopted Arya from an animal rescue two years ago, and was told that Arya had been rescued once before, but her owner had returned her to the shelter after a few years. “This poor dog was abandoned by at least two people,” Briggs said. “Seeing where she came from and knowing more about her, made me feel a lot closer to her. It just adds a little more depth to her.”

Thomas said knowing that Pete is a husky-Eskimo-boxer-rottweiler — and not the shepherd-collie mix the shelter had labeled him as — hasn’t changed their relationship at all. It does, however, allow her to have some fun when people ask what breed Pete is. “Some days I’m going to say he’s part rottweiler, and some days, when I feel like blowing someone’s mind, I’m going to say he’s part husky.”

As for Pete? He was simply happy to be a part of the celebration. “Pete just loved having all of his favorite people in one place,” Thomas said.