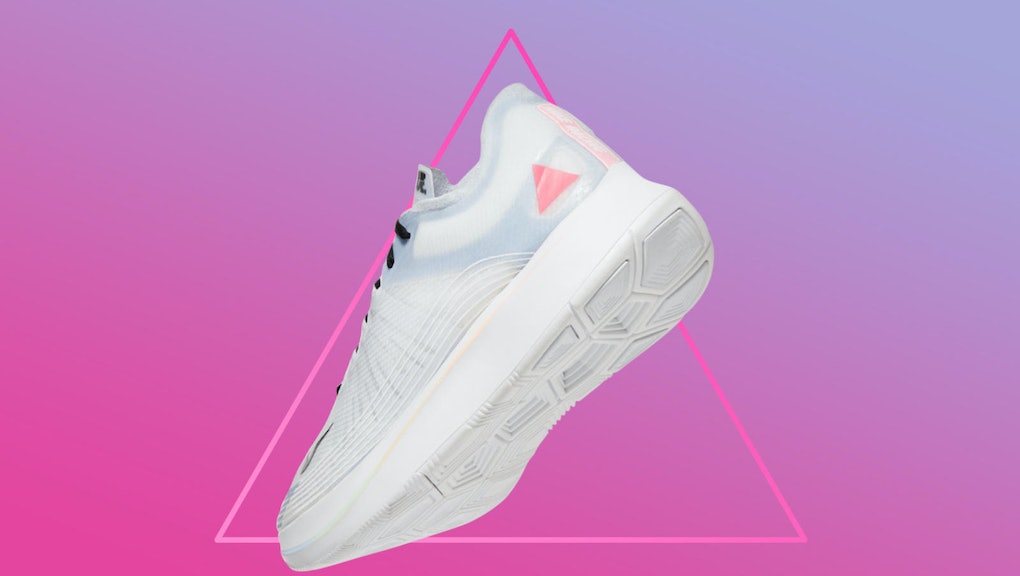 The AIDS Coalition to Unleash Power, an advocacy group founded in 1987, called out Nike on Twitter on Thursday over the athletic brand’s use of the pink triangle logo in its latest pride-themed collection.

The symbol, often an inverted pink triangle, was first used during World War II as a visual demarcator of LGBTQ individuals. As Nike correctly notes in its press release about the “Be True” collection, “The triangle was reclaimed in the 1970s by pro-gay activists and was later adopted by ACT UP in [its] memorable 1980s-era ‘Silence = Death’ campaign.” (According to ACT UP’s James Krellenstein, ACT UP was originally given permission to use the visual by the “Silence = Death” collective.)

“Hey Nike,” ACT UP tweeted. “We love that you’re moved by our work. How about donating the proceeds to current work we continue to do?”

Jason Rosenberg, one of ACT UP’s co-facilitators, also chimed in. “This is why the queer community has a murky relationship with corps,” he tweeted. “They appropriate our messaging for profit.”

Rosenberg said he first discovered the issue via designer Richard Wade Morgan, who tweeted at LGTBQ athletes including Billie Jean King and Adam Rippon in a follow-up thread.

“The corporatization of pride has been an ever-looming issue we’ve been seeing for [the] past decade and beyond,” Rosenberg said in an interview with Mic. “We’ve seen companies and institutions participate in pride en masse, even some that have poor LGBTQIA+ employment discrimination records or an utter lack of representation in the workroom.”

Rosenberg said this is why so many activist organizations have become skeptical of brand intentions when pride month rolls around each year. The Nike example is especially egregious: There’s been no explicit message that the company will donate any portion of its proceeds to ACT UP or another organization engaging in queer movement-based work. “We deserve better [than] to have our work be exploited by corporations that profiteer off grassroots resistance imagery,” Rosenberg added.

On Friday morning the brand responded directly to ACT UP’s tweet, writing that their team would be in touch.

This issue of corporations benefitting from LGBTQ identity without actually giving back in a substantive way is a topic Mic wrote about in 2017, highlighting brands that expressly give back to the LGBTQ communities through donations — as opposed to using pride to increase visibility — and sales.

It’s a subject writer Fran Tirado tweeted about back in April, listing what he dubbed “empty and/or ineffective ways to engage with the queer community,” including for-profit ventures slapping a rainbow on an ad and calling it a day with no queer nonprofit partner.

“In 2018, representation and inclusion are not the exception, they’re the expectation,” Tirado said in an interview with Mic. “We are no longer going to give brands a cookie simply for ‘showing up,’ because showing up is the bare minimum requirement. If we don’t hold brands accountable to a higher standard, they will continue to profit on the commodification of our identities using half-baked ideas that fail to nuance the everyday queer experience and end up communicating very little for our cause.”

Ultimately, it comes down to what many in the LGBTQ communities see as seemingly well-intended actions that do nothing beyond bringing attention to nonprofit organizations. And while publicity is important, nonprofits require money to survive, let alone thrive. For corporations, especially ones with an abundance of cash flow, paying profits forward to communities with disproportionate rates of poverty compared to heterosexual and cisgender individuals is all the more important.

And yet, here we are; here we remain.

Mic will continue following this story and will update with any advancements.