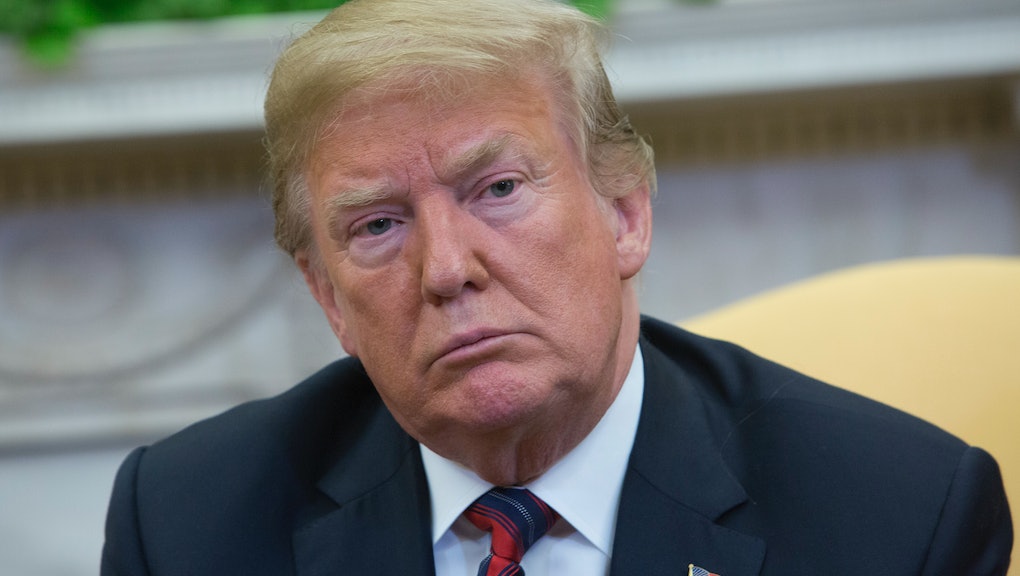 Lawyers for President Donald Trump told Robert Mueller that Trump could not have committed obstruction of justice by “virtue of his position as the chief law enforcement officer,” according to a January letter to the special counsel published Saturday by the New York Times.

“It remains our position that the president’s actions here, by virtue of his position as the chief law enforcement officer, could neither constitutionally nor legally constitute obstruction because that would amount to him obstructing himself, and that he could, if he wished, terminate the inquiry, or even exercise his power to pardon if he so desired,” Trump’s legal team wrote in its Jan. 29 letter to the Mueller team. “Constitutionally and as a matter of law, there is no basis for any investigation to include the conduct of the president of the United States.”

The letter, which was penned by Trump lawyers Jay Sekulow and John Dowd, appears to lay out the legal team’s view of the extent of the president’s power — and may foreshadow a coming subpoena battle between Mueller and Trump.

The special counsel’s office has been seeking an interview with Trump as part of its inquiry into possible collusion between his campaign and Russia in 2016, along with potential obstruction of justice on the part of the president.

But Trump’s lawyers have long been wary of allowing him to testify before Mueller. Rudy Giuliani, the public face of Trump’s legal team, said this week the president would not meet with the special counsel if the FBI allowed his lawyers to see “all the documents” related to investigators’ use of an informant in the early days of the Russia probe, which Trump has dubbed “Spygate.”

In the Jan. 29 letter, Sekulow and Dowd — who has since resigned from Trump’s legal team — attack the FBI and Department of Justice over their “corruption” and suggest the president would not agree to testify unless the special counsel’s team can “demonstrate with specificity why it is likely that the subpoenaed materials [here, his testimony] contain important evidence and why this evidence, or equivalent evidence, is not practically available from another source.”

“As you know, under our system of government, the president is not readily available to be interviewed,” the lawyers wrote. “Ample academic and jurisprudential material supports this important principle. Moreover, as we have indicated in our meetings, we are reminded of our duty to protect the president and his office.”

The lawyers also claimed they have been so forthcoming in response to the special counsel’s requests for documents and interviews with other witnesses that it would be unnecessary to interview the president.

“In light of these voluntary offerings, your office clearly lacks the requisite need to personally interview the president,” the letter read. “The information you seek is “practically available from another source,” and your office, in fact, has already been given that other source.”

Before the Times published its story on the letter, Trump accused Mueller and the DOJ of “leaking my lawyers letters to the Fake News Media” and suggested authorities should be investigating Democrats instead.

“There was No Collusion with Russia (except by the Democrats),” Trump tweeted. “When will this very expensive Witch Hunt Hoax ever end?”

Trump has spent months attacking Mueller, who has been leading the Russia investigation since May 2017 after the president terminated FBI Director James Comey.

Though he initially cited Comey’s handling of Hillary Clinton’s email scandal as the reason for his firing, he reportedly told Russian officials that axing the “nut job” FBI director had relieved “great pressure because of Russia.” He also suggested during an interview with NBC’s Lester Holt in May 2017 that the Russia probe had played a role in his decision to fire Comey.

“When I decided to [fire Comey], I said to myself, you know, this Russia thing with Trump and Russia is a made-up story by the Democrats,” Trump told Holt.

Comey’s firing has reportedly been a key element of Mueller’s probe into obstruction of justice, but in the letter released Saturday, Trump’s lawyers argue his exchange with Holt was “misreported and mischaracterized.”

The attorneys also defended Trump against possible obstruction accusations regarding his actions surrounding the probe into Michael Flynn — his former national security adviser, who pleaded guilty in December to making false statements to the FBI regarding his contacts with Russia. They wrote that Trump took “severe and consequential action” in firing Flynn over his Russia contacts and ordered the investigation into his actions be continued.

“The president did not obstruct justice,” the lawyers wrote with respect to Flynn. “To the contrary, he facilitated it.”

The lawyers do admit in the letter that Trump “dictated” the statement his son, Donald Trump Jr., initially gave to explain his shady 2016 meeting with a Russian attorney who supposedly had dirt on Clinton. But they described the misleading statement — which claimed the Trump Tower rendezvous was mainly about a “program about the adoption of Russian children” — as “short but accurate” and suggested that it would not be a crime for the president to deceive the public.

In all, the letter presents a broad view of presidential authority — and one the Times says could be challenged in court if Mueller does issue a subpoena to Trump.

“As all of the evidence demonstrates, every action that the president took was taken with full constitutional authority pursuant to Article II of the United States Constitution,” Sekulow and Dowd wrote. “As such, these actions cannot constitute obstruction, whether viewed separately or even as a totality.”