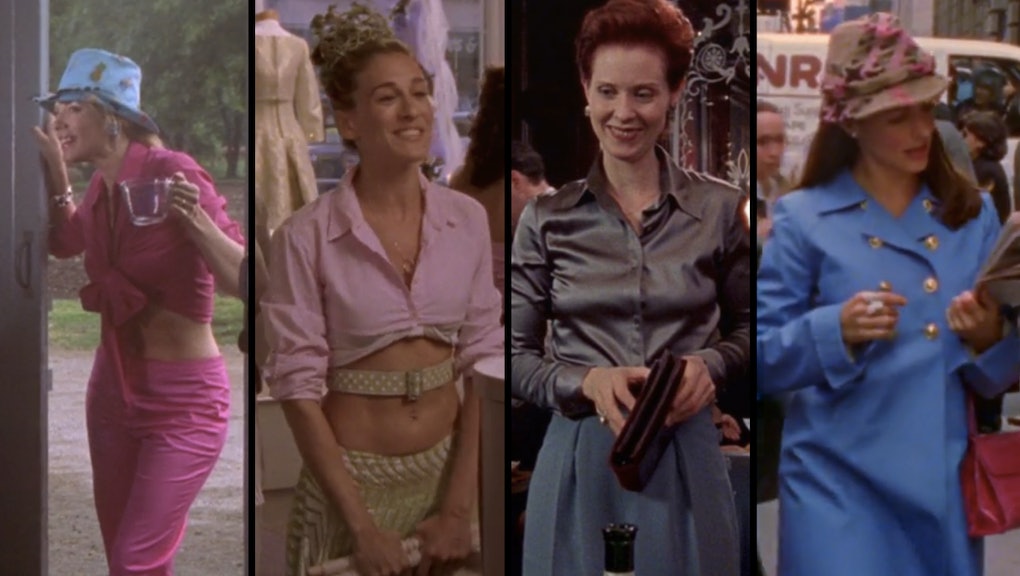 The fashion on Sex and the City, which is currently celebrating its 20-year anniversary (feel old yet?), had a plentiful amount of fashion moments so bad they were good.

With full credit to the show’s ingenious costume designer Patricia Field, the style on the show teetered between being completely believable (Miranda running around in sweatshirts, for example) to bizarre, like Carrie wearing completely see-through outfits outside of the house or a belt around a bare midriff.

Here are a few of our favorite truly bad style moments that we cannot stop thinking about, with special help from the @EveryOutfitOnSATC crew:

A newsboy cap has never been pulled off by anyone on earth, included Carrie Bradshaw in season four.

Carrie had a series-long love affair with hats actually, giving us this unfortunate look in season five:

And this in season six:

The piece de resistance of Carrie’s bad hats was definitely in season five though, when she attempted to channel Sheryl Crow and did not do anything of the sort.

A look we’re glad we only saw once.

Now onto Samantha Jones, a woman with such iconic and wild style that she has rare moments when she doesn’t pull off a look. However, in season four when she joined Carrie out “in the country,” this is what she wore:

The hat features a pineapple, so.

Now onto Miss Charlotte York, who was long styled as the most conservative and classic leading lady. That was never as clear as when the gang when to Atlantic City in season five, and Charlotte wore a damn buttoned-up Victorian blouse, complete with a frilly neckline.

There was also this moment that same season, when Charlotte dared to wear a plaid... tweed... bucket hat.

It must be known that someone had a personal vendetta against Cynthia Nixon the first two seasons because Miranda Hobbes got the shortest end of the style stick...

Now, whisper the name Aidan — a thumb ring come to life, also known as one of Carrie’s boyfriends — in any group of SATC-loving people and a war will rise. A consensus even among the Aiden lovers, though, is that this dude’s style sucked.

Here are some examples of his tragic looks:

That, for some, made him even more endearing and charming, but we can’t say we share those feelings.

The look that trumps all of these others, in our opinion, though, and the one we think about honestly constantly, is this look on Carrie from season four, which featured a belt worn around her bare waist.

Why? This is a question that will probably never be answered.