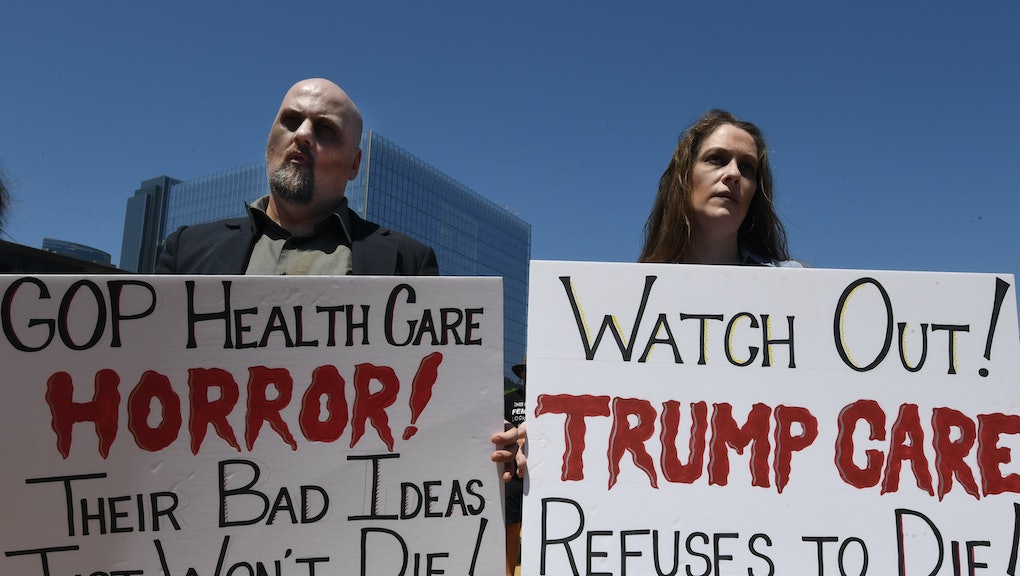 The Trump administration is once again reviving the health care debate, asking federal courts to overturn two of the most popular provisions of the Affordable Care Act, Politico reported.

In a response to a lawsuit filed by a group of conservative states that seeks to end the ACA, Trump’s Justice Department said Congress’ repeal of the individual mandate invalidates other key provisions of the heath care law. This includes rules that forbid insurers both from charging sick customers more for coverage or denying coverage to people with pre-existing conditions.

Those two provisions are some of the most popular aspects of the ACA, also known as Obamacare. And Republican attempts in 2017 to repeal Obamacare and those provisions were extremely unpopular and led to a backlash against Republican lawmakers.

Reviving this debate in the midst of midterm election season is a risky endeavor for a GOP already facing tough odds in November.

Polling shows health care is a top issue for voters in November, and that Americans are less likely to support Republicans who voted to repeal Obamacare.

“This unprecedented move by the Trump administration is further proof that Republicans will never stop attacking Americans’ access to affordable health care,” Meredith Kelly, communications director at the Democratic Congressional Campaign Committee, which seeks to elect Democrats to the House, said in a statement. “This is yet another malicious Republican attack that will undermine the stability of our health care system and could once again mean that you or a loved one are denied health care because of a pre-existing condition.”

“Republicans were already on the record: They want to take away coverage for pre-existing conditions, spike the cost of care and impose an age tax on older Americans,” he said in a statement. “Health care is the leading issue for voters this election year, and Republican Senate candidates will have to defend this decision along with every other plank of their deeply unpopular agenda.”

Today in Trump’s America: Trump feuds with allies ahead of G7 summit

President Donald Trump is publicly chastising the leaders of some of the United States’ best allies, setting up what’s sure to be an awkward G7 summit in Canada on Friday.

Trump’s disputes with leaders of G7 countries, such as Canada and France, center around trade. The president set off a trade war last week when he imposed steel and aluminum tariffs on Canada and the European Union, leading those countries to impose their own retaliatory tariffs, which threaten to dampen what’s currently a strong U.S. economy.

“Please tell Prime Minister Trudeau and President Macron that they are charging the U.S. massive tariffs and create non-monetary barriers,” Trump tweeted Thursday night. “The EU trade surplus with the U.S. is $151 Billion, and Canada keeps our farmers and others out. Look forward to seeing them tomorrow.”

“The American president may not mind being isolated, but neither do we mind signing a 6 country agreement if need be,” Macron tweeted Thursday night. “Because these 6 countries represent values, they represent an economic market which has the weight of history behind it and which is now a true international force.”

Trump went on to personally attack Trudeau by name after he blasted Trump and his tariffs last week, calling them “insulting and unacceptable.”

“Prime Minister Trudeau is being so indignant, bringing up the relationship that the U.S. and Canada had over the many years and all sorts of other things… but he doesn’t bring up the fact that they charge us up to 300% on dairy — hurting our Farmers, killing our Agriculture!” Trump tweeted Thursday evening.

Because of his feuds with the American allies, Trump is slated to leave the G7 summit early in order to head to Singapore for the June 12 summit with North Korean leader Kim Jong Un.

Alice Marie Johnson: Mic was with Alice Marie Johnson upon her release from prison after President Donald Trump granted her clemency for a first-time, nonviolent drug offense. Here are her thoughts about what it is like to be free after serving more than 21 years of a life sentence.

Winging it: Trump says he doesn’t need to prepare for his summit with North Korea’s Kim and insisted it’s more about “attitude” than preparation. I used to say the same thing before big tests, and my report card suffered for it.