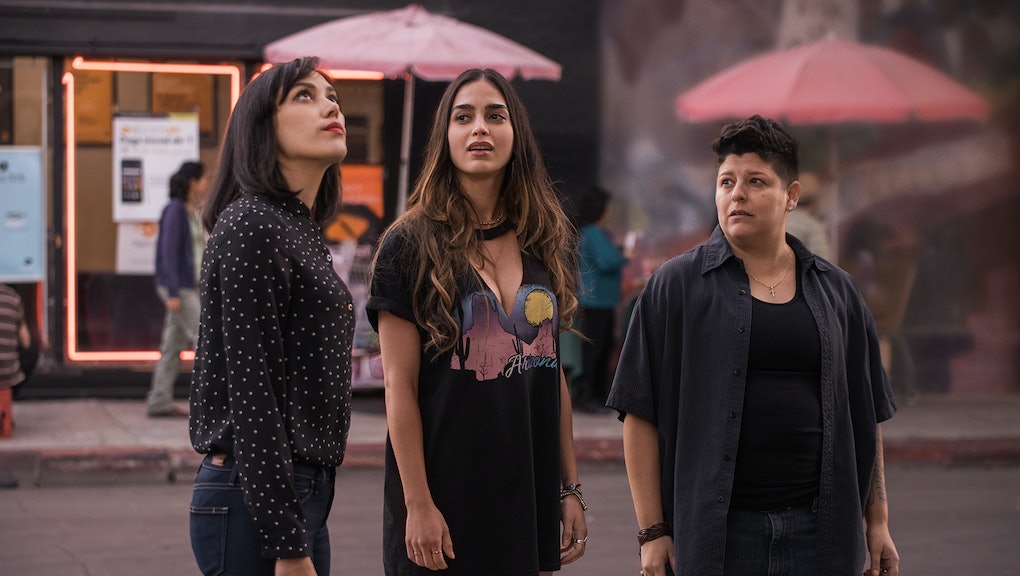 The Starz series Vida, which will wrap up its six-episode first season with a season finale on Sunday, is primarily a show about homecoming. Emma (Mishel Prada) and Lyn (Melissa Barrera) are two sisters who come home to East Los Angeles after their estranged mother suddenly dies. Upon returning to the old neighborhood, they learn that their mother had secretly remarried a woman named Eddy, and that the family bar has become a queer hangout spot.

Emma, a sharp lawyer who’s been living in Chicago, is also queer — and struggles to accept that her seemingly homophobic mother was gay herself. Lyn, a flighty hipster who dates wealthy white boys, gets caught up in a hometown romance that threatens to destroy several people’s lives and livelihoods. And their individual dramas play out against the backdrop of a rapidly gentrifying neighborhood where the threats to the low-income, Latinx residents come from both white interlopers and upwardly mobile Latinx residents eager to bring in coffee shops and condos and make a buck in the process.

The mind behind Vida, creator and showrunner Tanya Saracho, a playwright and TV writer, was brought in by Starz to develop a show centered around Latinx characters. To make Vida, she assembled what wound up being an all-Latinx writers room that also happened to be almost all women and mostly queer — some outlets have reported that Vida’s is the first all-Latinx writers room in TV history but Saracho cautioned that she’s not sure if that’s the case. “Other people said that it was the first, I don’t actually know, I can’t make that claim that it’s the first ever,” Saracho said in a phone call on Thursday.

Saracho spoke to Mic about her experience with Vida — telling uniquely Latinx stories, writing a show in Spanglish, queer representation and the care that went into Vida’s noteworthy sex scenes. The following interview has been edited and condensed for clarity.

Mic: There’s gradually more queer representation on TV, but most queer characters on TV are white. When Starz came to you with this idea to do a show about Latinx millennial women, did you know right away that you wanted to make Latinx queer identity a main theme of the show?

Tanya Saracho: I never thought of it as a queer show, early on. It was just the show I was writing. That actually came later when people started framing the show, when it already existed. But I wasn’t saying, “I’m writing a queer show,” because it was just a show that was true to life, to me.

Also, I didn’t go, “I want to write a queer show and I want to staff most of my writers queer.” That mattered, but I just felt like the people who I staffed were the best people to tell this story that was steeped in queerness. But calling it a queer show came later. For me it was like, this is the story I’m telling, as true to life as I can.

I was having this experience while I was watching like, I don’t know if I’ve ever seen a TV show with Latinx queer characters whose identities are presented so in-context. It’s not just, you know, the one Latina woman in a gay friend group.

TS: Yeah, context is important. Also, just the way the world is populated was important to me. Like, [Emma’s love interest] Cruz’s friends, they’re all these genderqueer, brown, educated, ratchet friends that are very real. And we didn’t explain — like, I didn’t say one of them is trans, one of them is genderqueer. They just exist, and that was really important, to have that and also to cast it with actual queer actors. Same thing with Eddy’s group of friends. It’s that type of masculine-of-center butches that are a little older, a little more old-school.

And then the way Emma has sex, she’s a top-femme. I think people are mistakenly thinking that she’s in the closet. She’s not, she’s just not a very caring person, [she’s] a person that does not like intimacy. So you don’t see her talk about herself in that way. But she’s not in the closet. And she knows what she wants. But the narratives we have are like, “Well, she must be in the closet if she’s not out there talking about it. Or having a girlfriend and being out about it.” But no, she’s a broken person who happens to be queer.

TS: Yes. And it helps having a female, queer room. Because everything was discussed, and it passed the test of that room so I felt really good about putting it out into the world. That scene at the top of 103 [the third episode, which opens on Emma having somewhat kinky sex with Sam, who she met on an app] was so workshopped, was so talked about. Every little beat that we wrote, even though the director was male, for that scene, it was so mapped-out.

It was like, “We want it to feel this way, we want it to look like this.” When you first see the person, you don’t know if they’re male or female, your eye doesn’t know what to do with them. Genderqueer-ness in the character of Sam was important. Also, you might think a genderqueer person would be a top, you might just assume. Nah, this femme is a top. All that was workshopped.

Also, I don’t know how else to say it, but face-sitting is a big thing! And we never see it. It’s a thing we do. I just don’t see enough face-sitting on TV, so I’m like, we need to have some of that.

TS: So when you see her squatting, you’re like, wait, am I really seeing this? But it’s because in bedrooms and living rooms and wherever, you do see it. But on TV we just haven’t been allowed to.

Sometimes when queer women are having sex [on TV] it’s in a very artsy way. And sometimes that feels like [it’s] for the male gaze. It’s piecemeal, like, “Look at their lips touching.” It’s like, “No, this is how we do it.”

I want to ask you about the theme of safe spaces in the show and the questions of when is a space safe to be in, and for whom. Is that a theme you think was borne of the writer’s room you had, that was all Latinx, mostly queer, mostly women?

TS: I think it was in the water. Except for one person, everyone else had been in other writer’s rooms. And they just kept saying, “Gosh, it feels amazing to not be a token, or an ambassador for every person of color ever.” This feels so different [that] we’re all even here. Your pitches are listened to in a different way, you don’t have to defend your culture and your pitch. So that was very much the narrative. And the fact that La Chinita is a queer bar in this traditionally Latinx neighborhood, you’re writing about a safe space.

So yes, but it wasn’t like we made a connection between the room and the [show], it was just in the air.

Let’s talk about the language on the show, especially the Mexican-American slang. There were times when I was watching where I would be like, I need to pause and look things up. Tell me about how you decided what words to include — and how you made the decision not to have any subtitles.

And also I’m from Texas, not California, so my Spanglish had to be adapted for this area by the people in my room who are from Boyle Heights and from the Eastside. They were like, “Mmm, we don’t actually say that.” And I was like, “Oh, really, well, that’s a Texas thing.” Or, having been in Chicago for 15 years too, Mexicans in Chicago speak a certain way because we’re so steeped in Puerto Rican and Cuban culture in Chicago that you adapt some words. But I wrote it, and everybody wrote it, how they heard it. That part was the most organic. And sometimes we would just check with the Californians and be like, “This is right, right?”

TS: Two tracks — every time I produce a script I’m thinking of them in two tracks. First, for the dominant culture, a lot of our work there is to normalize us and be like, “Look, we’re as fucked up as you and we’re also as awesome as you, and as normal, and [we] breathe the same air, [we’re] under the same moon.” That’s very important, that track.

And then [there’s] the track that is the code-switch track, which is dedicated to us. And I don’t just dedicate it to Mexican-Americans. I think Latinx, there’s a lot of commonalities in our culture. There are 27 countries that make up the Latin diaspora.

What, if anything can you tell me about the next season? Season one ends on this very forward-looking note. Is that something you’re working on now? Do you have a vision for the characters?

TS: I think it’s getting clearer. I want to just get a second season, so that I can make it clearer. But the first six episodes should serve as a three-hour pilot, so by the end you think, “Now we can begin.” It’s a prologue. So now you know the characters, and now you know the world, because that’s another character, right? The world of the Eastside of Los Angeles.

This show is obviously going to be about gentefication, but at the beginning [of the season] it’s sort of flirting with that notion. At the end it’s like, “Wait, how are these girls going to contribute to that?” Because they are staking their claim. So now we can begin the story. Now we can get into it, all of it.