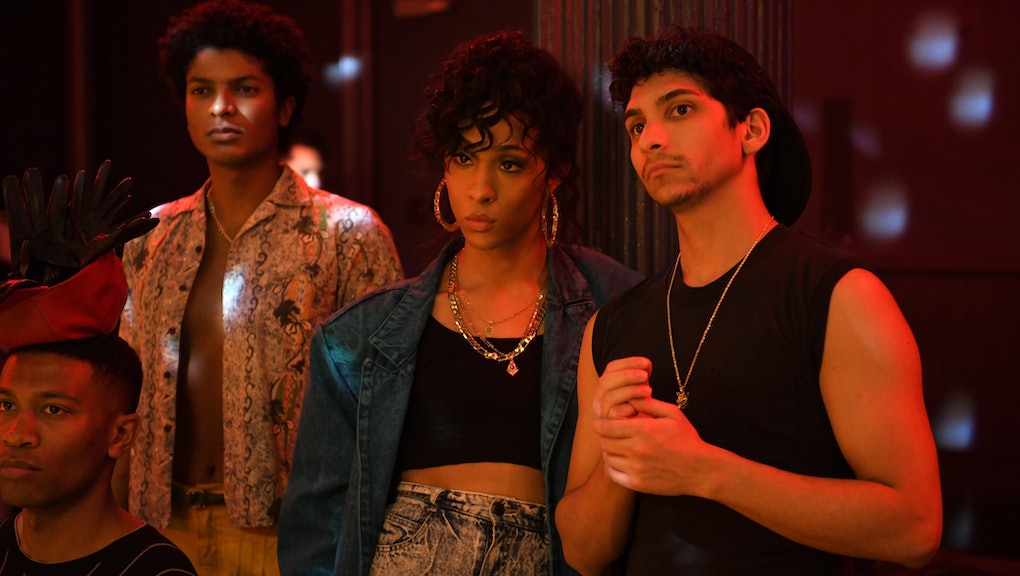 The second episode of Pose, FX’s fabulous new queer drama set in 1980s New York City, turned out to be a glamorous follow-up to its premiere: It confidently maintains the momentum established by that first episode, deftly weaving compelling personal drama while evoking important historical detail. Though Pose is firmly based on the city’s ballroom culture, a story thread in Sunday night’s episode shed light on an issue that remains painfully relevant today: transphobia within the gay community.

At the beginning of the episode, we see Blanca (played by Mj Rodriguez), the show’s main character, a transgender woman who recently formed the House of Evangelista, a scrappy group of up-and-comers to the ballroom world. Blanca decides, at the last minute, to enter a ballroom competition against Elektra Abundance, the legendary head of the House of Abundance and Blanca’s former house mother.

Though she’s at a disadvantage, Blanca’s magenta, form-fitting gown, complete with a frilly hat that’d make the Queen of England blush, earns her higher scores from the judges. In doing so, Blanca humiliates Elektra — who’s wearing a frilly, navy dress one judge describes as looking like “the inside of a coffin” — and wins herself a trophy, officially landing herself in the highly competitive race for mother of the year.

To celebrate, Blanca invites her friend Lulu (played by Hailie Sahar), who is also trans, to a gay bar called Boy Lounge. As soon as they walk in, the bar’s almost universally white, upper-class, muscular gay clientele icily stares them down.

“Why are we meeting here?” Lulu asks. “Is this some kind of joke?”

“No, it was in the Village Voice,” Blanca responds. “Best gay bar in Manhattan, two years running. I wanted something special to celebrate me snagging my first trophy.”

“You do know they don’t serve our kind here,” Lulu says.

“Bitch, shut up,” Blanca says. “Our money is just as good as anyone’s.”

Blanca soon discovers that’s very much not the case, when a white gay man wearing a form-fitting teal tank top sneers at them as he walks by.

“Happy Halloween, ladies,” he says, laughing. A bartender soon asks them to leave, saying other gay men keep “asking if it’s drag night.” It’s not long before the manager kicks them out, saying he’s not interested in hosting “a costume party.”

Blanca seems utterly taken aback at how she and Lulu have been treated, but Lulu knows better, saying transgender people are at the bottom of the societal totem pole — that even though their gay peers should theoretically be allies, they’re all too happy discriminate against trans people just as they have been discriminated against.

“Everybody needs someone to make feel superior,” Lulu says. “That line ends with us, though. This shit runs downhill past the women, the blacks, Latins, gays, until it reaches the bottom and lands on our kind.”

Though it takes place in the ‘80s, Blanca’s experience in Boy Lounge is a scenario that will still feel all-too-familiar to trans people in 2018. According to the results of a survey of trans and gender nonconforming people published by the National LGBTQ Task Force, 53% of respondents reported being verbally harassed in public settings, like bars and airports. Forty-four percent reported they’d been refused equal treatment or service in these places because they were trans. The survey also found that trans people of color, like Blanca, were more than twice as likely — 22% versus 8% — to experience physical assault in public settings than their white counterparts.

But that’s just accounting for discrimination in public, generally heteronormative spaces. Discrimination from within LGBTQ communities is still occurring, too. In November 2017, them. reported on clashes between gay, white, cisgender men — like those in Boy Lounge — and those calling for more intersectional activism. Around the same time, Into published a similar condemnation of modern-day, gay male-led activism, saying that “white cisgender gay men took control of the wheel of the bus and threw trans people right under it.”

One example most frequently held up of white gay men co-opting activism at the expense of others is Stonewall, a 2015 film about the landmark riots in New York City in 1969. Though trans women of color, like Marsha P. Johnson and Sylvia Rivera, were largely at the forefront of these riots, Stonewall centered its narrative around an attractive, cisgender (and fictional) white gay man.

In a later scene, Pose evokes this troubled history between the trans and gay communities yet again, when Blanca returns to Boy Lounge — this time by herself — and confronts a young black man there.

“Have you noticed you’re the only one here with a year-round tan?” Blanca says to him. “They don’t want us here.”

Almost immediately, the bar’s manager confronts Blanca again, asking her to leave. Soon thereafter, a police officer shows up, repeatedly misgendering her and calling her “sir.” Blanca refuses to back down, and is eventually thrown in jail for the night for disturbing the peace. Despite not finding much success, it’s pretty clear this isn’t a fight she’s likely to back down from anytime soon. The first time Blanca and Lulu are thrown out, Lulu asks why she “always gotta pick fights [she] can’t win.”

“Because these are the ones worth fighting,” Blanca answers.