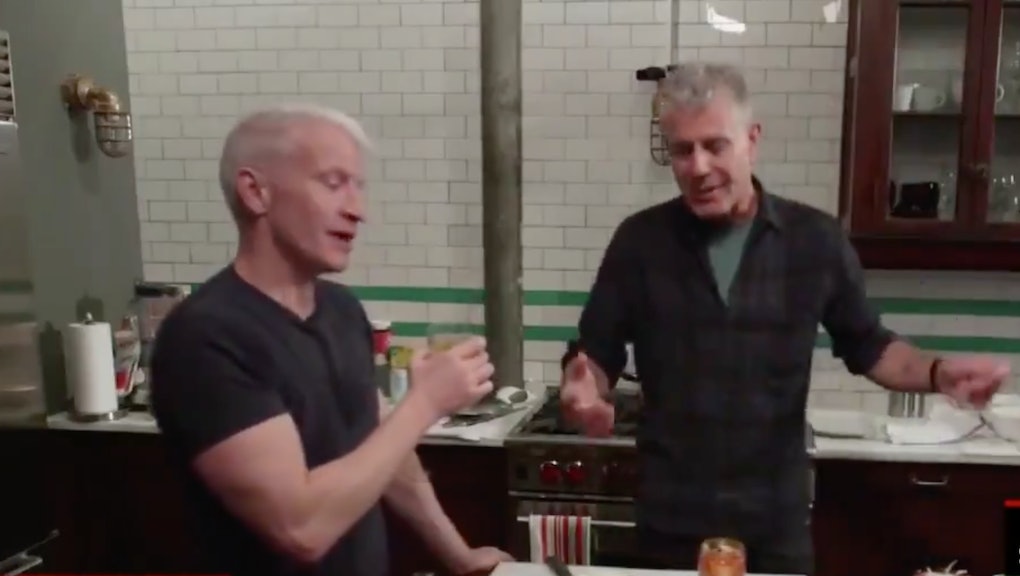 “Everybody wanted to be a little bit of Anthony Bourdain”: CNN remembers Bourdain in special tribute

On Friday night, CNN aired a tribute to Anthony Bourdain, the outspoken chef and television personality who died Friday morning. The memorial interspersed clips from CNN’s Parts Unknown With Anthony Bourdain with studio interviews with CNN anchors whose lives were touched by Bourdain.

While every anchor had different anecdotes to share of their time spent with their colleague, the overarching theme was this: Bourdain saw food as a common denominator. The chef used food as a means to even the playing field and to get whoever was sitting across from him at the table to open up.

“I thought that he was a better journalist than many of us ever could be,” said Don Lemon, host of CNN Tonight. “Because it came to him naturally. It was just curiosity. And isn’t that really what being a journalist is all about?”

Anderson Cooper agreed with Lemon’s depiction. “It was interesting to see Anthony often winding up in the epicenter of very serious political situations,” Cooper said.

Bourdain, in his humility, may have disagreed: “I would describe myself as a lucky cook who gets to tell stories. I’m certainly not a journalist, I’m not a chef anymore. I like to flatter myself by saying I’m an essayist. I’m a storyteller.”

Tonight, CNN made clear that it is not worth speculating what exactly it was that led to Bourdain’s death. “Just because somebody is open about their illness in the past doesn’t mean that they’re going to be as open about what’s happening in their present,” Chris Cuomo, host of CNN’s Cuomo Prime Time, said in the tribute.

Bourdain was sincere in his storytelling. As former President Barack Obama had said to him in their episode in Hanoi, Vietnam, “People everywhere are pretty much the same.” His fellow colleagues will remember him for changing their network and what it means to be a journalist. “He brought this other way to learn about the world — this other way of asking questions,” Brian Stelter, host of Reliable Sources, said. “Not through an interview, not through an interrogation, but by sitting down and sharing a meal. What he was doing was journalistic, but more importantly it was human: bringing people on a journey with him while he met people in their place with their food, with their meals, with their culture.”

Perhaps no one loved food as much as Bourdain. The joy he felt when talking about food came through in the tribute. “Everybody wanted to be a little bit of Anthony Bourdain,” anchor Kate Bolduan said. “Overliquored, overfed, traveling the world, having fun, connecting with people and getting paid to do it.”

His love for food didn’t eclipse the fact that he simultaneously saw it as a medium for a message. “Food’s really important,” Bourdain said in a clip. “It’s worth fighting about, it’s worth arguing about, it’s worth talking about all day long. But it’s only part of the larger spectrum of human experience. Without good conversation, without ambiance, without love, without company, it’s worthless basically.”

Bourdain’s passing will hopefully encourage more conversations around mental health, CNN hosts said. “I hope that our world can take just one more gift from Tony Bourdain and really try to explore the problems of mental health,” CNN correspondent Christiane Amanpour said toward the end of the tribute. “This has to be a moment when [we] take this epidemic and this crisis seriously.”

Episodes of Bourdain’s shows will air Saturday on CNN starting at 8 p.m. Eastern. On Sunday at 9 p.m. Eastern, CNN will air the regularly scheduled episode of Parts Unknown, on Berlin, with an introduction from Anderson Cooper.

Editor’s note: For information about suicide prevention or to speak with someone confidentially, contact the National Suicide Prevention Lifeline at 1-800-273-8255 or the Crisis Text Line at 741-741. Both provide free, anonymous support 24 hours a day, seven days a week.