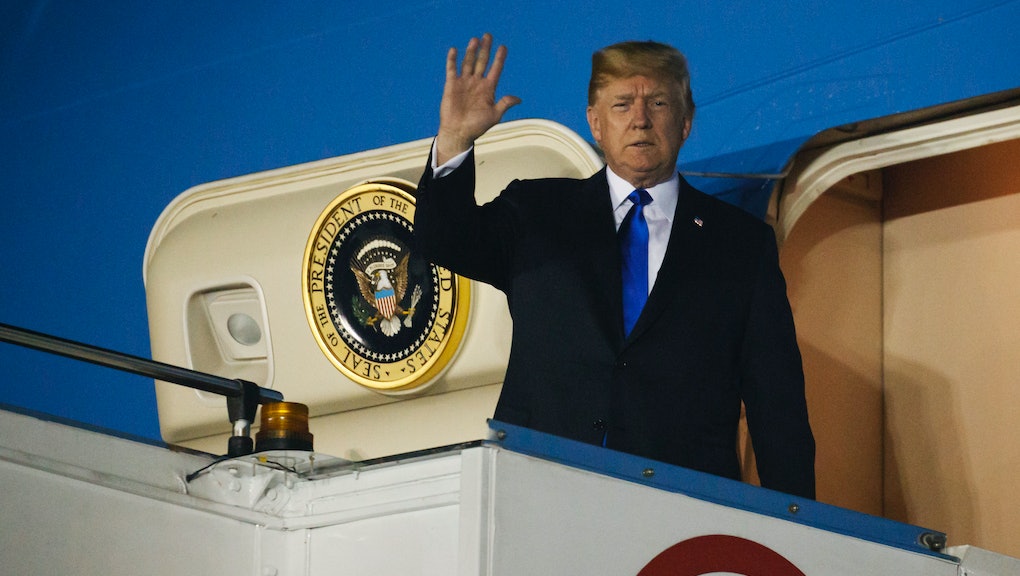 Trump touched down in Singapore on Air Force One Sunday, where he was greeted by Singaporean Foreign Minister Vivian Balakrishnan and the U.S. Embassy’s chargé d’affaires Stephanie Syptak-Ramnath. Kim arrived a few hours earlier to meet with Singaporean Prime Minister Lee Hsien Loong.

Lee will also meet with Trump ahead of Tuesday’s summit, which is slated to begin at 9 a.m. local time (9 p.m. Monday night Eastern time). The talks will take place at the Capella Hotel on the island of Sentosa, a small resort island off Singapore’s southern coast.

A U.S. official cited by Bloomberg said Trump intends to meet one-on-one with Kim at the start of the meeting. The president said during a press conference Saturday that he expects to know “within the first minute” whether Kim is serious about denuclearization.

“I think I’ll know pretty quickly whether or not, in my opinion, something positive will happen,” Trump said Saturday. “And if I think it won’t happen, I’m not going to waste my time. I don’t want to waste his time.”

Assuming the meeting continues, Trump will then be joined by Secretary of State Mike Pompeo, White House chief of staff John Kelly and national security adviser John Bolton. Following the meeting, Pompeo will then travel to South Korea and China to brief the country’s leaders on the talks.

Though the White House has not released an official list of topics for the meeting, it is expected that the question of North Korea’s denuclearization will be at the forefront of the discussions. Whether or not the summit will result in any sort of signed agreement, including one officially bringing an end to the Korean War, remains to be seen. Trump said on June 1, “We’re not going to go in and sign something on June 12 and we never will,” noting that the summit was about “start[ing] a process.”

On June 7, however, Trump changed his tune, saying, “We could absolutely sign an agreement with North Korea. But that’s really the beginning. The hard part remains after that.”

The historic meeting is not expected to last longer than one day, although when the summit will wrap up Tuesday is unclear. A U.S. official cited by Bloomberg predicted the meeting will go into the evening and potentially end with a joint resolution. A source cited by Reuters, however, said Kim is tentatively scheduled to leave Singapore at 2 p.m. Tuesday, suggesting the meeting could be a short affair.

Even if brief, the meeting could potentially be the start of a broader dialogue between Trump and Kim. Trump said Saturday that the “minimum” outcome of Tuesday’s talks will be establishing a “relationship” with the North Korean leader. If things go well, the president has also raised the possibility of inviting the North Korean leader to the White House.

“Certainly, if it goes well,” Trump said Thursday when asked if he would invite the North Korean leader to the U.S. “And I think it would be well received. I think he would look at it very favorably. So I think that could happen.”