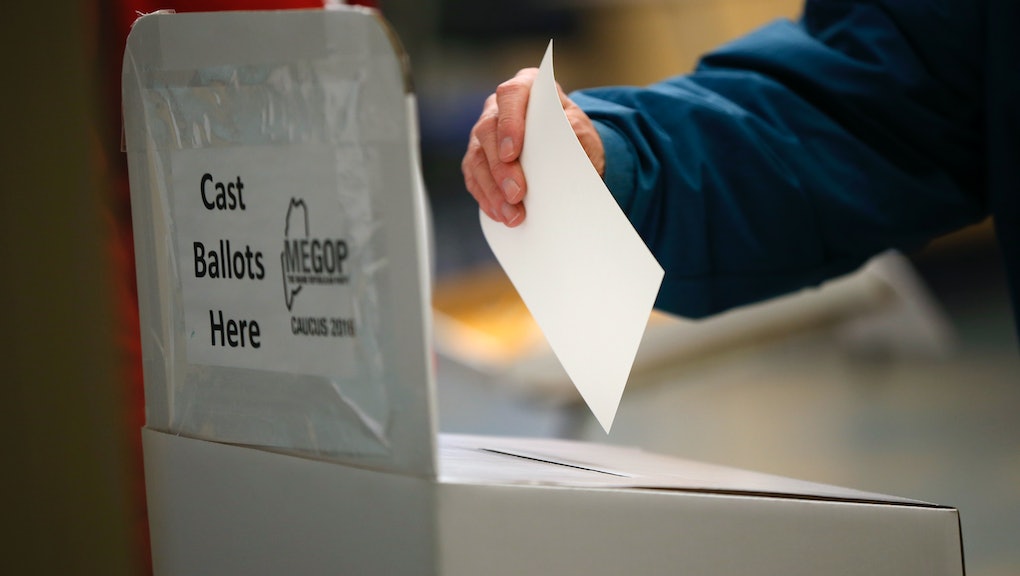 The future of voting? Maine’s ranked-choice voting primary is an ambitious test

Mainers heading to the polls on Tuesday will be participating in the state’s first election since it completely upended its system of voting, in an ambitious experiment that could become a model for the nation — or a cautionary tale.

After a 2016 ballot initiative passed, Maine is now holding the United States’ first-ever statewide ranked-choice voting primary. In this new system, voters will select multiple candidates and rank them by order of preference, instead of simply choosing one preferred candidate.

The ranked-choice voting system is already being used in developed nations around the world, like Australia and Ireland, while several U.S. municipalities like Oakland, California, and Minneapolis also allow voters to rank candidates. But Maine will be the first U.S. state to implement the system for a statewide election, in an experiment that election reformers everywhere will be watching closely.

For a real-world example of how ranked-choice voting can impact the outcome of an election, consider the 2016 Republican presidential primary, which ultimately gave Donald Trump the Republican nomination.

In February of that year, Trump won the New Hampshire primary (the first presidential primary after the Iowa caucus) with about 35% of the vote, similar to his national polling average among Republican primary voters at the time. That means nearly two-thirds of Republican primary voters did not consider Trump their first choice for president, but those voters all split their votes among the wide array of primary candidates who had decided to run that year.

Had New Hampshire used a ranked-choice voting system, anti-Trump Republicans in the GOP primary could have ranked non-Trump candidates in order. This would have allowed them to consolidate their vote and given them a better shot at defeating Trump.

The reason that Maine became the first state to adopt statewide ranked-choice voting is simple — they need it the most.

Maine voters have a history of supporting independent candidates for statewide office who are not members of either major party. As a result, Maine candidates often end up splitting the statewide vote between at least three candidates, allowing for a “spoiler effect” where two or more candidates split the vote, allowing a less popular candidate to win with a plurality of less than 50%. Over the past 25 years, only one Maine gubernatorial hopeful has ever won an election with more than 50% of the vote — then-governor Angus King, who won re-election with a decisive 58% in his 1998 re-election bid.

In 2010, current Republican governor of Maine Paul LePage won his first governor’s race with just 37.6% of the vote, after his independent and Democratic opponents split the vote. Despite a nationally controversial tenure involving racially insensitive comments as governor, LePage went on to win re-election with 48.2% of the vote, while his Democratic and independent opponents won a combined 51.8%.

Those split elections make it difficult for candidates from outside the two parties to justify staying in statewide races. This may be why Maine’s independent candidate for governor, Maine Treasurer Terry Hayes, is an enthusiastic supporter of the ranked-choice system.

“It provides more voter input on the decisions about who the leaders are going to be, and it also has a tendency to reduce the negative campaigning during the campaign season,” Hayes said during an interview in March. “We look at it and say, ‘Wouldn’t it make sense to have the opportunity to vote for your first choice, your second choice, your third choice. You know we do that everyplace else in our lives. Why can’t we do that at the ballot box?

Opposed to the measure is the state’s Republican leadership, including LePage himself. Maine Republicans view the new system as an attempt to prevent their party from winning statewide office in split elections.

After Maine voted to approve their new ranked-choice system via a ballot initiative in 2016, Republicans initiated a series of court challenges and legislative maneuvers to try to prevent the law from going into effect. In the lead up to Tuesday’s primary, state Republicans have blocked funding for Maine’s secretary of state’s office that would have been used to help set up the new system and educate voters about how to use it.

As part of that effort, Maine’s governor signed into law a bill that would effectively delay implementation of ranked-choice voting for general elections until after 2018. Maine voters will decide whether or not to veto that delay in a question that will appear on the ballot in Tuesday’s primary. Should primary voters chose not to stick with ranked-choice voting, the experiment in Maine may be short-lived.

To make matters even more uncertain, LePage told a local press outlet on Tuesday that he would “probably not” certify the results of the primary and would “leave it up to the courts” to decide whether or not they would allow ranked choice voting.

Despite the possible upsides for Maine, the new system has many voters worried about potential pitfalls.

Maine voters will not get to learn the results of their primary on election night itself. Instead, polling stations have three days to send their ballots to the state capital in Augusta, where they will handle the complicated process of tabulating votes under the new system. Final results are not expected until the week after the primary election.

Adding to the confusion, Maine’s Secretary of State Matt Dunlap will be announcing results on each successive round of balloting — meaning voters will have to follow as the results change between each successive round. And even if voters decide to keep their new system in place, they may find that using an alternative election system creates a whole host of new issues down the road.

That’s the lesson recently learned by residents of California, where voters approved a statewide system colloquially known as a “jungle primary” in 2010. In that system, candidates from all parties run against each other in one single primary election, and the top two vote-getters advance to a runoff in the general election, regardless of their party affiliation.

Though California’s top-two system had benefited Democrats in the past by keeping Republicans out of big races, such as the 2016 race for U.S. Senate, in 2018 it created a whole new set of headaches for Democrats.

On Tuesday, California Democrats narrowly avoided being shut out of three important congressional races, when a large field of the party’s candidates risked splitting the Democratic vote between themselves, and therefore allowing two Republicans to advance to the general election.

A ranked-choice system like the one in Maine could be the exact solution to the kinds of “spoiler” problems that California’s system currently faces. Because the ranking system does not allow a candidate to win with less than 50% of the vote, a broad field of candidates from one party would not risk splitting the vote amongst themselves.

But the Maine system could also have its own unintended consequences. By eliminating the spoiler effect, ranked-choice voting does away with the traditional disincentives for third-party candidates, which could result in elections where a host of minor parties enter the fray with the hopes of surviving the first round and consolidating support as voters’ second, third or even fourth choice. That would break the two-party duopoly that younger generations of voters have grown increasingly wary of, but would open the door to a whole new world electoral politics where candidates are subject to less vetting from major party institutions.

In that sense, Maine, a state that is no stranger to third-party candidacies, could offer the nation its first glimpse into what an American political world beyond two parties truly looks like, and whether such a system is worth emulating nationwide.