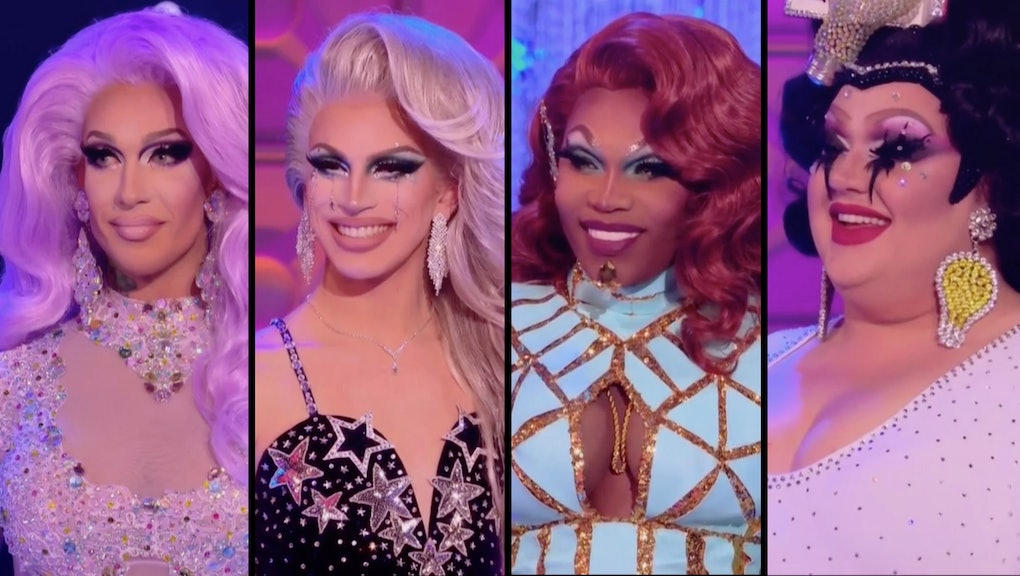 Hello, my fierce little fava beans. Welcome to Fundamental Reading, the weekly column where we chat about RuPaul’s Drag Race.

Well, folks, here we are. I can see the light at the end of the glitter-encrusted tunnel, just past all the discarded vodka bottles and the corpses of The Vixen’s enemies.

This week’s episode is technically the last true episode of the season before next week’s inevitably messy (but delightful) reunion episode and the finale after that. In some ways, it’s like a final exam at the end of the semester: It’s important, sure, but unless someone really knocks it out of the park or totally biffs it, the final outcome is unlikely to change much.

Therefore, it seems appropriate to take stock of the final four queens — Aquaria, Kameron Michaels, Eureka and Asia O’Hara — and evaluate who’s most likely to take the crown based on their performances this episode and the season more generally. Here are my picks, ranging from who I think is least likely to win to the one I think is all but certain to emerge victorious. Shall we?

Sorry girl, but Kameron has been circling the drain for the past few weeks in the bottom two, and I just don’t see a world in which she can convince Ru she deserves the crown more than any of the other three finalists.

In this most recent episode, Kameron absolutely had one of the best verses in the remix of Ru’s “American” song, but I don’t think it’ll be enough to tip the scales in her favor. Her entirely lavender runway look this episode was gorgeous as well — but again, is it enough to redeem her habit of landing in the bottom? I’m not convinced.

Now, there is a sort of Hail Mary argument to be made that Kameron is this season’s “lip sync assassin.” After all, she knocked out girls in the bottom across three different weeks. Maybe she’ll be able to do the same in the finale, assuming it uses the same bracket-style lip sync structure from season nine. Even still, Kameron hasn’t lip synced against Asia or Aquaria yet, both of whom are fierce performers. Kameron might get lucky enough to out-perform one girl, but you can only drop into a middle split so many times and walk away unscathed.

Here’s where things get a little trickier. This slot and the second are essentially interchangeable; they’re both incredibly fierce queens, but I don’t think either will win. Eureka landed in the third spot mostly out of my own personal tastes.

In this episode, Eureka did undeniably great. She was the only one to rap her entire “American” verse, and it went surprisingly well. That said, her mostly stand-still choreography left something to be desired, particularly with this strange spin-cycle maneuver that she didn’t seem entirely sure how to pull off.

Eureka has been at the top of her game pretty consistently all season (albeit with a few stumbles at the beginning), but I’m not sure she has what it takes to win two lip syncs in the finale. She lip synced twice this season — once early on and once much later against Kameron, which resulted in a tie. Eureka delivered strong performances both times, but they lacked the pizzazz and wow factor that — if season nine is anything to go by — Eureka will need to snatch that crown. Serving face just isn’t going to cut it in the wake of Sasha Velour.

But who knows? There’s always a chance she’ll surprise us. It would certainly be a redemptive arc, following her unexpectedly early exit from season nine.

Two words: fish mask. Asia almost landed in the bottom during the mermaid-inspired runway, for which she donned a truly horrific, ridiculous mask with a dramatic, fishy frown. The mask drew mixed reactions, but it was the bizarre, dark black mustache underneath that makes me think Asia might be one to watch in a lip sync-based finale.

In interviews, Asia has stated that she had a plan for some kind of dramatic reveal if she ended up having to lip sync during mermaid week — and, in fact, that she always has some kind of plan if she’s in the bottom. Given her orange balloon continuity on the runway last week and her dandelion visual gag a few weeks earlier, that shouldn’t come as a surprise.

Separate from that preparedness for a final lip sync scenario, Asia has simply been one of my personal favorites this season. I suppose her arc has partly mirrored that of season nine’s Trinity Taylor, who was initially pigeonholed as a pageant queen, but over time came into her own as a sharp-witted competitor who could excel in comedy challenges, too. But for Asia, it took an absolute bomb of a performance in the Snatch Game, as an unusually mean-spirited Beyoncé, to give her the kick in the pants she needed to step things up.

This episode, Asia’s verse in “American” might’ve been the weakest of the bunch, but it certainly wasn’t bad. I just don’t know that there was a breakout moment that stuck in my mind as particularly memorable. Her runway, however, as a turquoise-and-gold-plated warrior goddess with a jewel beard, was incredible.

For better or worse, I think this season’s fashion-forward “lerk queen” has it in the bag, y’all.

For starters, Aquaria is the only one of the remaining four who has yet to land in the bottom two. It’s also pretty clear Ru herself has quite a fondness for Aquaria, and has saved her from the bottom when, at times, it seems she didn’t deserve the safety she was awarded.

But Aquaria absolutely deserves her spot in the top regardless of whatever divine intervention she may or may not have experienced. She has consistently proven that she excels not only on the runway, but also in the challenges themselves, including, most surprisingly, the infamously difficult Snatch Game. Up until then, it wasn’t clear whether Aquaria was going to be able to overcome her reputation as an icy fashion queen, but her witty portrayal of Melania Trump won me — and, more importantly, the judges — over.

Despite Aquaria’s ability to avoid the bottom two thus far, don’t make the mistake of underestimating her abilities in a lip sync. If this video posted from recent Pride Month festivities is anything to go by, Aquaria’s gonna make the others work to keep up with her.

Furthermore, what sets Aquaria apart from the competition is her intricate knowledge of the way Drag Race itself works. As someone who was a literal child when the show first debuted, Aquaria, perhaps more than any other queen on this list, understands what makes a performance on Drag Race memorable. All I’m saying is get ready for some gag-worthy stunts.

In her performance of “American,” Aquaria turned out a fascinating “Madonna goes to the ball” sort of aesthetic. Her number featured intricate choreography that she nailed and fun (though heavily autotuned) lyrics with both sung and spoken sections. Aquaria opened the show, and Kameron was the only one who even came close to beating her. Her final runway look was stellar, too. It was classic Aquaria: a traditional sort of silhouette, but with sexy, modern twists to make things fresh, including star-shaped symbols hanging from her eyelids on long chains.

These are my picks, but anything could happen once it comes time for the final four to finally duke it out. See you there.