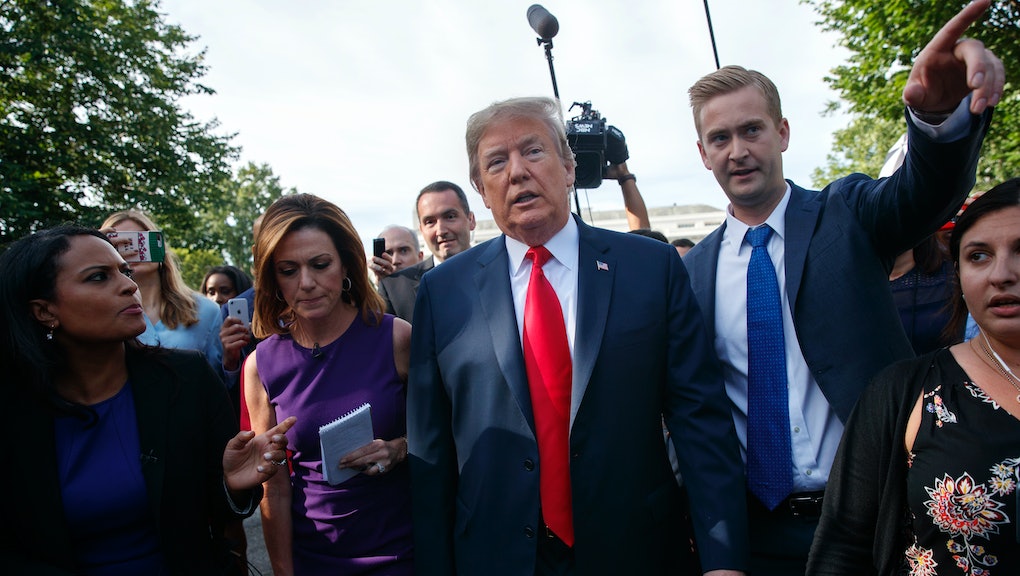 On Friday morning, President Donald Trump walked out of the White House and up its driveway for an unscheduled news conference with reporters. During it, he made wild assertions about wanting Americans to treat him the way North Koreans treat their dictatorial leader and spouted off lies about everything from immigration law to the recent FBI inspector general report about former Director James Comey.

It’s hard to know where to begin in breaking down Trump’s comments, so we’ll start from the beginning.

Trump claimed his administration is separating migrant children from their parents at the border because of a Democratic law.

“That’s a Democrat bill; that’s Democrats wanting to do that,” Trump said about immigration officials separating children from their parents at the border.

This is a completely and utterly false statement. There is no law — Democrat-written or otherwise — that demands his administration separate children from their parents at the border. The Trump administration has adopted this policy to deter migrants from coming to the U.S. to seek asylum.

Trump waxed poetic about how North Korean dictator Kim Jong Un is treated by his people.

“Hey, he’s the head of a country, and he’s the strong head. Don’t let anyone think anything different. He speaks and his people sit up at attention,” Trump said. “I want my people to do the same.”

Of course, Kim demands his people follow his every lead, lest they be locked up in prison camps where they may be beaten, raped, starved, generally tortured or even executed.

Trump later said he was “kidding” when he made that comment — though if you watch the video, you’ll see he’s completely deadpan in a way that makes it difficult to ascertain if he’s actually joking.

Trump went on to defend his salute of a North Korean general while in Singapore this week — which has drawn condemnation given that the North Korean military carries out Kim’s atrocities.

“I’m being respectful to the general,” Trump said. “We have a very good relationship with North Korea.”

Trump also declared the North Korean threat of nuclear war is now “solved” — even though the statement the White House released from the meeting was vague and had no concrete measures to ensure Kim would denuclearize.

“I will tell you this: We now have a very good relationship with North Korea. When I came into this job, it looked like war,” Trump said, adding “I have solved that problem. Now we’re getting it memorialized and all, but that problem is largely solved.”

On the FBI inspector general report

Trump went on to comment about the report from the FBI inspector general about former Director James Comey’s handling of the Hillary Clinton email investigation.

“The report yesterday may be more important than anything — totally exonerates me. There was no collusion, there was no obstruction and if you read the report, you’ll see that,” Trump said.

Yet the report has absolutely nothing to do with the Russia investigation. It is solely about the FBI’s handling of the Clinton email investigation. So, of course it wouldn’t say anything about Russian collusion. And it certainly doesn’t say Trump is “exonerated” of anything. Yet on Friday morning, Trump claimed he was exonerated.

“I did nothing wrong. There was no collusion, no obstruction. The IG report yesterday went a long way to show that, and I think that the Mueller investigation has been totally discredited,” Trump said.

On the Trump Tower statement

Trump was asked about whether he dictated the misleading statement about his son Donald Trump Jr.’s meeting with a Russian lawyer at Trump Tower during the campaign. His lawyers have already admitted Trump dictated the statement.

Trump suggested it didn’t matter whether his statement was false or misleading, because it wasn’t under oath.

Trump said he wants to meet with Russian President Vladimir Putin this summer and reiterated he wants Russia to be readmitted to the G8 — a group of world leaders that Putin has been booted from after he illegally annexed Crimea in 2014.

With that, a now clearly agitated Trump walked back into the White House to leave the country to process the wild, lie-filled rant he just delivered.