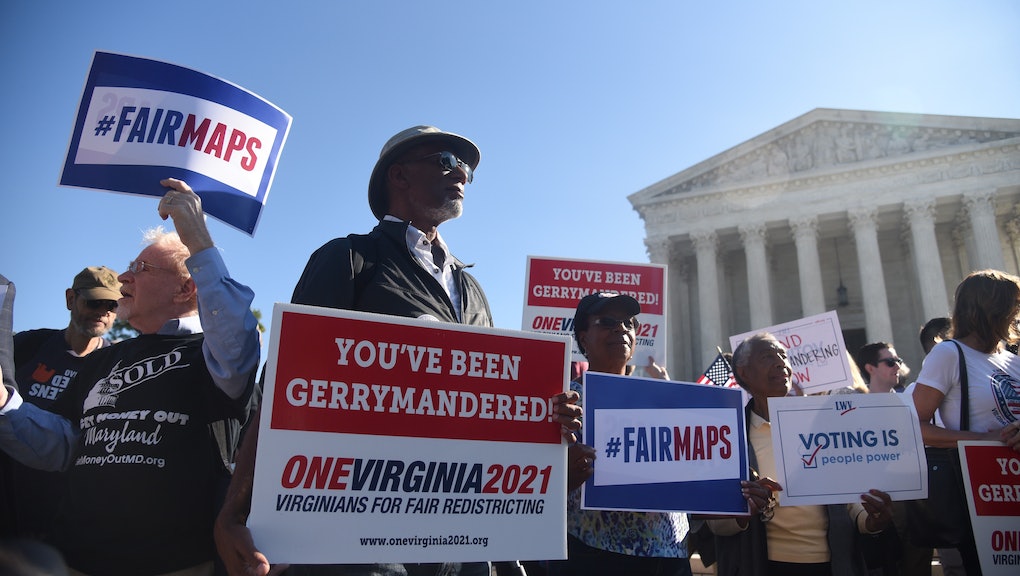 The U.S. Supreme Court avoided issuing a sweeping ruling on the issue of partisan gerrymandering Monday, delivering narrow opinions in two cases that had the potential to reshape election maps nationwide.

The court issued rulings in two cases, Gill v. Whitford and Benisek v. Lamone, both of which concerned partisan gerrymandering, or the practice of drawing election maps to unfairly benefit a single party. In both cases, however, the court declined to rule on the practice of partisan gerrymandering itself, instead focusing their rulings on specific procedural aspects of each individual case.

Democratic voters in Wisconsin argued that redistricting was biased toward Republicans and violated their First and 14th Amendment rights in Gill v. Whitford. The plaintiffs argued that a gerrymandered map keeps Democratic voters from being treated equally and discriminates against them for expressing their political views.

“In this case the remedy that is proper and sufficient lies in the revision of the boundaries of the individual’s own district,” Chief Justice John Roberts wrote in the court’s opinion on the case.

“It is a case about group political interests, not individual legal rights. But this Court is not responsible for vindicating generalized partisan preferences. The Court’s constitutionally prescribed role is to vindicate the individual rights of the people appearing before it.”

Rather than dismissing the case entirely, the court sent the case back to the district court, which will allow the plaintiffs to argue their case again and show “concrete and particularized injuries using evidence ... that would tend to demonstrate a burden on their individual votes.”

The court similarly avoided ruling on gerrymandering in Benisek v. Lamone, which concerned partisan gerrymandering in Maryland. In this case, it was Republican voters who felt they had been unfairly discriminated against by a map that favored Democrats. The plaintiffs who brought the case argued for a district court to provide a preliminary injunction that would prevent the state from holding elections under its current map, which was last redrawn in 2011. That court denied the injunction.

In its ruling Monday, the Supreme Court upheld the district court’s decision to deny the injunction without ruling on the practice of partisan gerrymandering itself. In a five-page opinion written per curiam, meaning unsigned by any specific justices, the court upheld the district court’s denial by pointing to the plaintiffs’ delay in challenging the 2011 map, a time constraint preventing the “timely completion” of a new map, and the legal uncertainty over partisan gerrymandering at the time, given the Supreme Court’s pending decision in Gill v. Whitford.

Partisan gerrymandering has become a major issue as Americans prepare for the midterms and the 2020 census, which will provide the next opportunity for states to redraw their congressional maps. Pennsylvania redrew its congressional maps after the state Supreme Court in January found them to be unfairly biased, and a number of other states are pushing their own redistricting measures ahead of 2020 through both ballot measures and legislation. Americans remain broadly opposed to gerrymandering; according to a September study from the Campaign Legal Center, 73% of respondents did not want any partisan bias in how districts are drawn, even when it’s in favor of their own party.

Though that future did not arrive on Monday, Justice Elena Kagan predicted in a concurring opinion for Gill v. Whitford that a court ruling on partisan gerrymandering cannot be far off. Describing gerrymandering as “incompatible with democratic principles,” Kagan noted that the standing requirements that prevented a Gill ruling “will not often or long prevent courts from reaching the merits of cases like this one. Or from insisting, when they do, that partisan officials stop degrading the nation’s democracy.”

“Courts have a critical role to play in curbing partisan gerrymandering,” Kagan wrote in her opinion. “Because of the way this suit was litigated, I agree that the plaintiffs have so far failed to establish their standing to sue, and I fully concur in the court’s opinion.

“But of one thing we may unfortunately be sure. Courts — and in particular this Court — will again be called on to redress extreme partisan gerrymanders. I am hopeful we will then step up to our responsibility to vindicate the Constitution against a contrary law.”