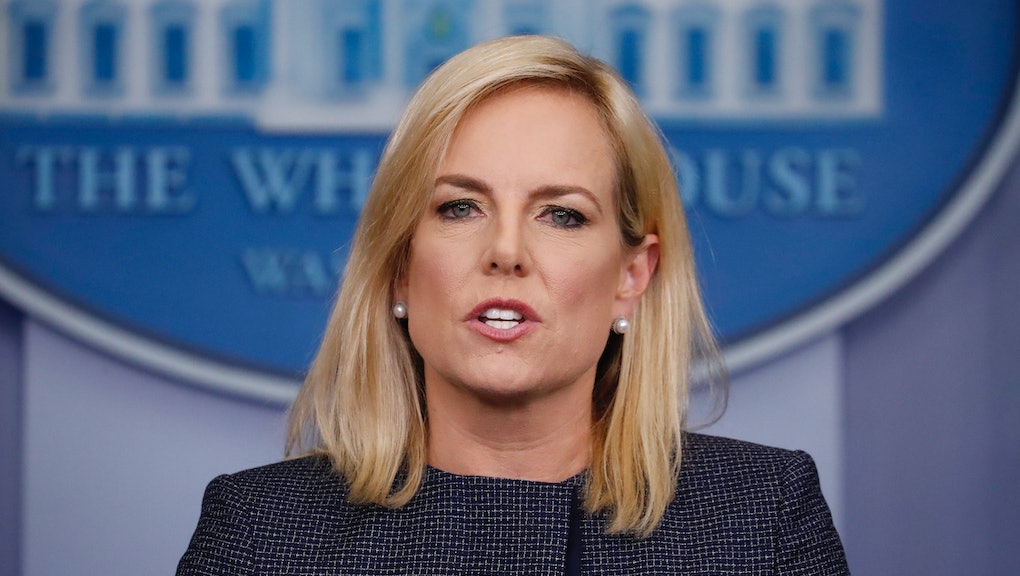 On Monday, Department of Homeland Security Secretary Kirstjen Nielsen doubled down in defending the Trump administration’s wildly controversial policy of separating immigrant families at the border in a guest appearance at the White House press briefing Monday afternoon.

As reporters questioned whether children were being adequately cared for and whether the policy constituted child abuse, Nielsen said that the DHS was merely enforcing policies and it was up to Congress to change the laws.

“We no longer exempt entire classes of people who break the law,” Nielsen said of law changes. “Everyone is subject to prosecution.”

Citing images and audio that emerged this week — like that released by ProPublica on Monday, in which children could be heard sobbing and pleading with Border Patrol agents to let them see their parents and other relatives — one reporter asked Nielsen: “How is this not specifically child abuse?”

“Somehow we’ve conflated everything, but there’s two separate issues: 10,000 of those currently in custody were sent by their parents, with strangers, to undertake a completely dangerous and deadly travel across the desert alone,” Nielsen said in response.

When asked whether the Trump administration had taken a more hardline stance on immigration in order to send a message — as Attorney General Jeff Sessions has previously said — Nielsen responded that she “find[s] that offensive.”

“Why would I ever create a policy that would do that?” she asked. “The answer is that it’s a law passed by U.S. Congress. Rather than fixing the law, Congress is asking those who enforce the law to turn our backs on the law and not enforce the law.”

In recent days, as national outcry over the family separation policy has reached a fever pitch, top Trump officials — including the president himself — have tried to pin the blame for the immigration crisis on Democrats. During Monday’s briefing, Nielsen, too, called upon Congress to close so-called loopholes in order to fix the situation at the border.

“Congress and the courts created this problem, and Congress alone can fix it,” Nielsen said. “Until then, we will enforce every law we have on the books to defend the sovereignty and security of the United States.”